Throughout history, especially in science, women’s contributions have often been ignored or neglected. Celebrate the work of women in STEM with these picture books. 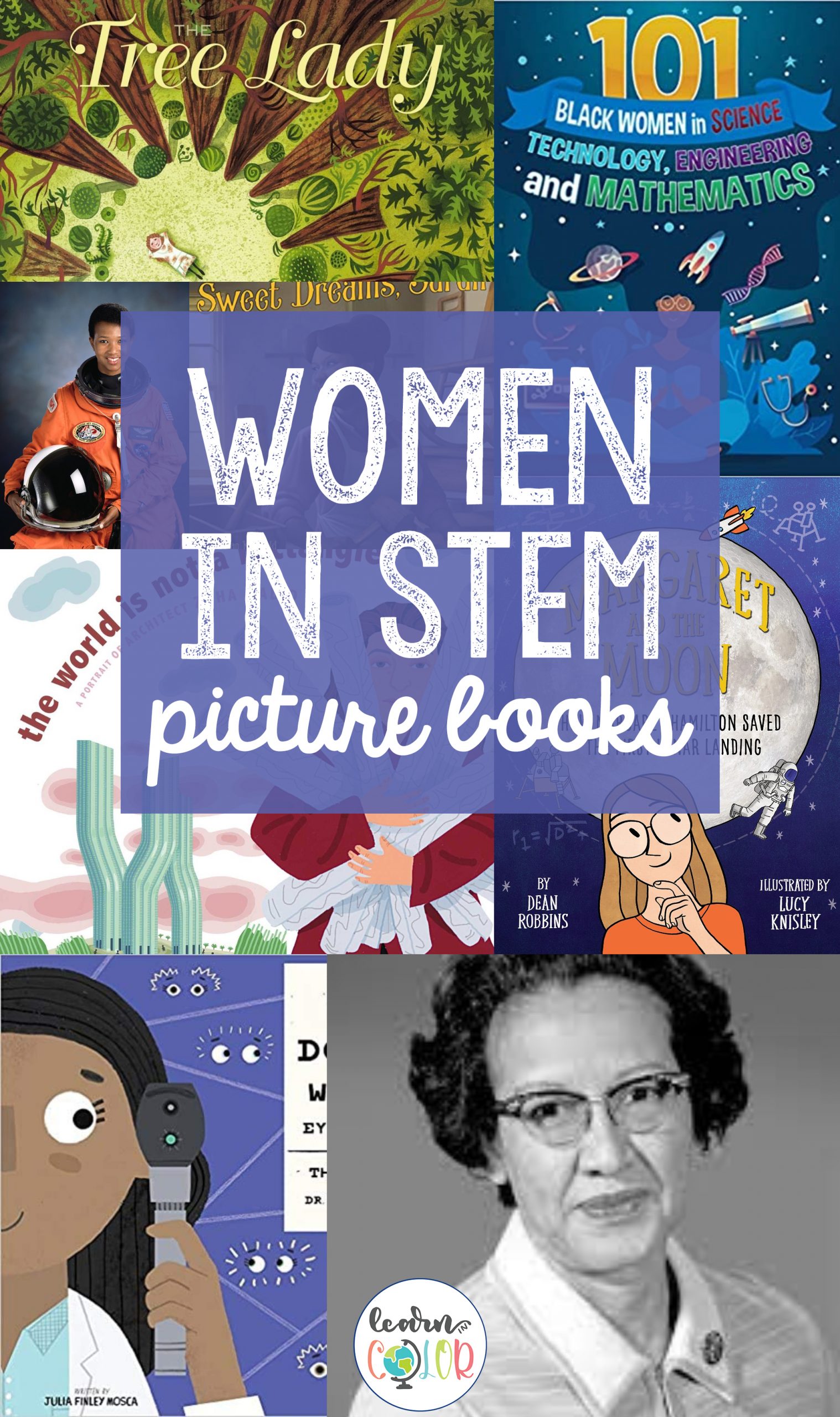 Bring history alive and celebrate women in STEM with this picture book list.

Ada Byron Lovelace and the Thinking Machine by Laurie Wallmark

Ada, daughter of a famed poet, had a mind for numbers. When she meets Charles Babbage, inventor of the first mechanical computer, she figures out how to program the machine. 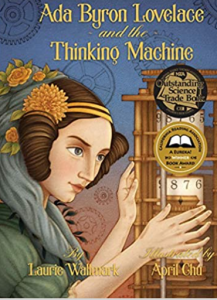 Even as a child, Grace Hopper loved discovering how to get broken things working again. During WWII, she became a part of WAVES, the women’s Naval Reserve, where she put her problem-solving brain to work on complex computer-coding projects.

The Doctor With an Eye for Eyes: The Story of Dr. Patricia Bath by Julia Finley Mosca

Patricia Bath knew she wanted to make a difference in the world by becoming a doctor, but when she began her journey she had no idea what barriers she would face! Despite the odds being stacked against her, Patricia Bath reached her goal and even began came up with a treatment for blindness!

Mattie was never without her notebook–a worn volume with pages filled with sketches of the ideas she had in her brain. With the notebook and her father’s toolbox, Mattie could take apart and put together just about anything. She was always looking to improve on things, like building a faster sled or piecing together a higher-flying kite. She also invented a tool to help loom workers be safe as well as a paper-bag manufacturing machine.

Margaret and the Moon: How Margaret Hamilton Saved the First Lunar Landing by Dean Robbins

Margaret Hamilton was a curious child who grew into an equally inquisitive adult. After graduating from MIT, she worked for NASA, where she developed a computer program that helped solve potential problems that a spacecraft could experience.

Who Says Women Can’t Be Doctors?: The Story of Elizabeth Blackwell by Tanya Lee Stone

In the 1800s, the idea of women attending college to go into the medical field was virtually unheard of. Elizabeth Blackwell knew that more than anything, she wanted to become a doctor. Most inspiring is that she was willing to face rejection and discrimination in order to see her dream come to life. Grab the book guide here. 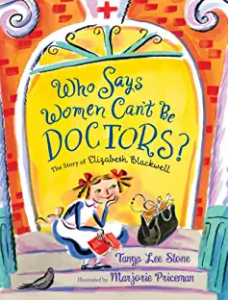 Sarah Goode was one of the first Black women to get a U.S. patent. After seeing there was a need for a bed that you could use for multiple purposes, she creatively came up with the invention of the cupboard bed.

The Elephant Scientist by Caitlin O’Connell

When scientist Caitlin O’Connell traveled to Namibia for the first time, she was excited to spend time with elephants up close and personal. During her hours spent observing these massive creatures, O’Connell made some important discoveries about how elephants live and interact.

Learn about Mae Jemison, a young woman who made history when she was the first African-American woman to travel with NASA to space. This book is a great overview of Mae’s life and a great story to inspire other young girls to follow their dreams. Grab the book guide here. 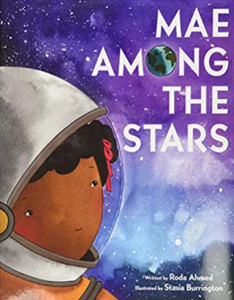 The Tree Lady: The True Story of How One Tree-Loving Woman Changed a City Forever by H. Joseph Hopkins

Katherine Olivia Sessions was the very first science graduate at her alma mater, the University of California. After graduating and moving to San Diego, Sessions became frustrated at the lack of trees in her new city. She wanted more than concrete for San Diego, so she used her knowledge and passion to create an initiative that turned San Diego green.

Raye Montague knew she wanted to be an engineer after stepping foot on a German submarine boat as a young child in the 1940s. She was a brilliant mathematician, and her drive and talent served her well as she worked towards her dream. Despite others trying to stop her from her dreams because of her gender and skin color, she persevered and rocked the boats of the U.S. Navy!

Talkin’ About Bessie: The Story of Aviator Elizabeth Coleman by Nikki Grimes

Bessie Coleman was frustrated with always being told what was and wasn’t acceptable for a poor Black woman to do. Segregation and Jim Crow laws sought to put a lot of limitations on a woman like Bessie, but she did not let anything stop her on her way to reaching her dream of becoming the first African American pilot.

This book showcases the amazing accomplishments of Black women throughout history to today in fields like science, math, and engineering. It also gives a good introduction to some super-cool careers in these areas that just might motivate young girls and boys to achieve their future goals and dreams.

Henrietta Leavitt, now considered to be one of the most renowned astronomers, got her start at Harvard Observatory. Her job was to count stars for the male astronomers. While counting stars, she started writing down the amazing things she saw in the sky. Her calculations about distance between the stars and interesting facts about their brightness helped her male coworkers to finally acknowledge the contributions she could make. 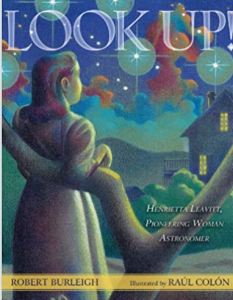 The World is Not a Rectangle: A Portrait of Architect Zaha Hadid by Jeanette Winter

Iraqi-born Zaha Hadid loved designing buildings all around the world. But she faced lots of discrimination from people who rejected her because she was Muslim. This story of her determination and persistence will inspire young girls to dream.

Life in the Ocean: The Story of Oceanographer Sylvia Earle by Claire A. Nivola

As a young girl, Sylvia Earle was fascinated with bodies of water. She stared into the pond near her home, studying its creatures and plant life. When her family moved to Florida, Sylvia watched the waves off of the Gulf of Mexico in amazement. As an adult, Sylvia decided to turn her interests into a career, landing a job as an oceanographer and passionate advocate for the care of our Earth’s oceans.

Mary Anning began discovering fossils when she was just a child, and when she grew up, that curiosity led her to a career as a paleontologist. She found the first complete fossil of a plesiosaur in 1823.

Solving the Puzzle Under the Sea: Maria Tharp Maps the Ocean Floor by Robert Burleigh

Marie Tharp had always loved the ocean. She wanted to do something no one else had ever done before: map the ocean floor! Although many had tried and failed before, Marie took on the difficult task and found a way to do the nearly impossible task. 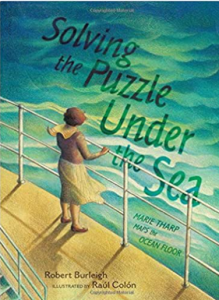 Scientist Rachel Carson compiled her research into a book called Silent Spring. This book proved to be a turning point as it revealed how the chemicals we use impact the environment.

In a time when women weren’t readily accepted into universities, Marie Curie earned dual degrees in physics and mathematics. Her research led to her discovery of radioactivity, and in 1903 she became the first woman to earn the Nobel Prize for Physics.

Learn about the real brains behind some of NASA’s greatest moments: Dorothy Vaughan, Mary Jackson, Katherine Johnson, and Christine Darden. Their mathematical skills and determination allowed them to make history for NASA, the United States, and the world!

The Watcher: Jane Goodall’s Life With the Chimps by Jeanette Winter

Primatologist Jane Goodall has spent her life among chimpanzees, often using unconventional methods to enter into their world on an even closer level. Her love for science, discovery, and the animals she’s given her life to are evident through the pages of this story.

Mama Miti: Wangari Maathai and the Trees of Kenya by Donna Jo Napoli

Wangari Maathai, affectionally known as Mama Miti, founded the Green Belt Movement in 1977. This movement pulled a community together as a united front in order to restore the trees to the forests of Kenya. She was also the first African woman to receive the Nobel Peace Prize.

Katherine always had a brain that loved to learn. Math was her specialty. After starting college at the age of 15 and graduating at 19, she joined NASA as a “human computer”, or person who painstakingly checked mathematical equations in order to assure quality and safety of spacecraft. 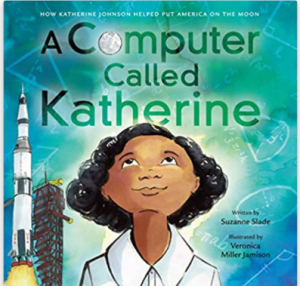 Counting the Stars: The Story of Katherine Johnson, NASA Mathematician by Lesa Cline-Ransome

Even as a child, Katherine Johnson had an insatiable desire to learn. She was always asking questions and wondering things about the way the world worked. This curiosity led her on a path that took her to a job at NASA, where she began to calculate pathways for spacecraft, including John Glenn’s orbit around earth. Grab the book guide here.