There are quite a few books about Europe during WWII, but there are not that many about the Pacific theater. Women Heroes of World War II: The Pacific Theater profiles 15 courageous women in the Pacific. 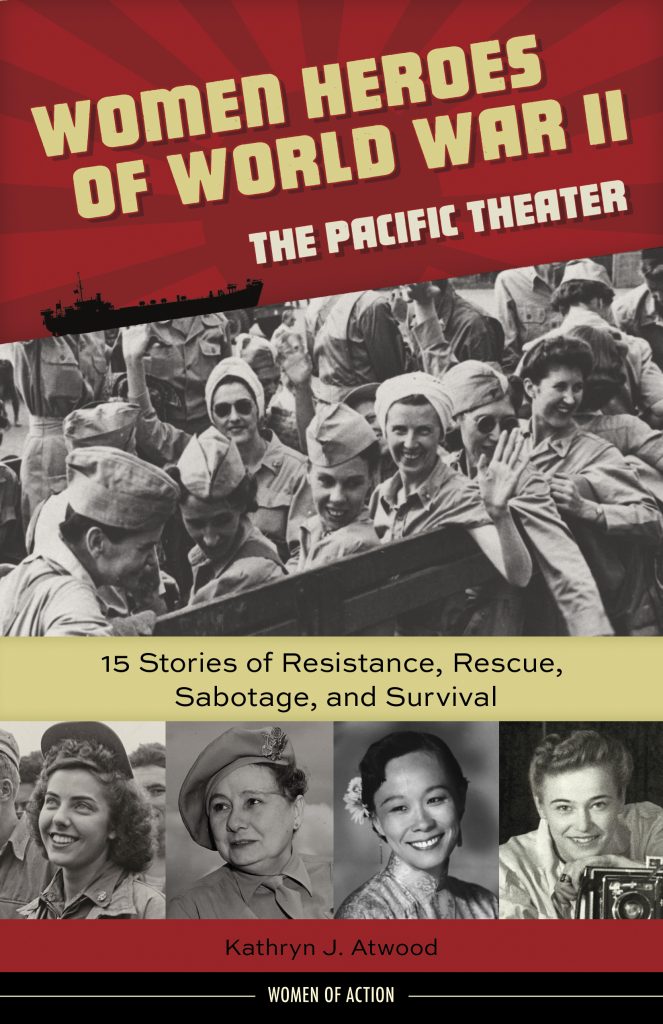 I’ve been a fan of Kathryn Atwood since her original Women Heroes of World War II, which showcases 26 female heroines in Europe. Like most people, I’m more familiar with the European theater than the Pacific theater, but I believe it is important to fully realize the terrorism Japan caused during WWII.
Not many people or history books talk about the Pacific theater to the large extent it needs to be talked about. Under Hitler’s rule, around 11 million citizens died, with about 6 million of those being Jews. During WWII, the Japanese were responsible for about 30 million deaths, with about 23 million of those being ethnic Chinese.
The Japanese bombed Pearl Harbor on December 7, 1941, which instantly entered America into World War II. At this same time, Japan was attacking Singapore and Hong Kong, and invading Malaysia and Thailand. Many people know the atrocities at Auschwitz, but massacres during the Pacific are little-known.
Women Heroes of World War II: The Pacific Theater profiles 15 courageous young women from countries in the Pacific, such as China, the Philippines, and Singapore. Chapters are sorted by country, and each woman’s story lasts about 10 pages. At the end of each chapter, there are more resources for extended research. I prefer the shortened chapters (instead of long biographies) because they allow me to briefly learn about some women, while letting me go more in-depth for my favorites.
Atwood shines a light on some of the horrors of the Pacific theater, such as the Bataan Death March and the rape of Nanking. in an age appropriate manner. At the same time, I never felt like she belittled anything. You’ll meet a woman who was a singer by day, and spy by night, and an Australian nurse who was the sole survivor of a Japanese massacre. The age range is about 14+, which I think is appropriate for most, although assistance through reading some of the chapters may be necessary.
In an interview, Atwood realizes that when people think of WWII in Europe, they instantly think of the concentration camps. However, when it comes to the Pacific, most people’s image is immediately the mushroom clouds from the atomic bombs.
With Pearl Harbor’s 75th anniversary coming up this year, I felt this book would make an excellent gift for both boys and girls in high school, or mature students in junior high. In an age where musicians and celebrities are known as “heroes” – Women Heroes of World War II: The Pacific Theater shows us what true heroism looks like.
Disclaimer: I received this book for free in exchange for an honest review. This did not shape my opinion.
Disclaimer: Some of the following links are affiliate links. I make a small commission from some of the links on this site. You can read my full disclosure here.