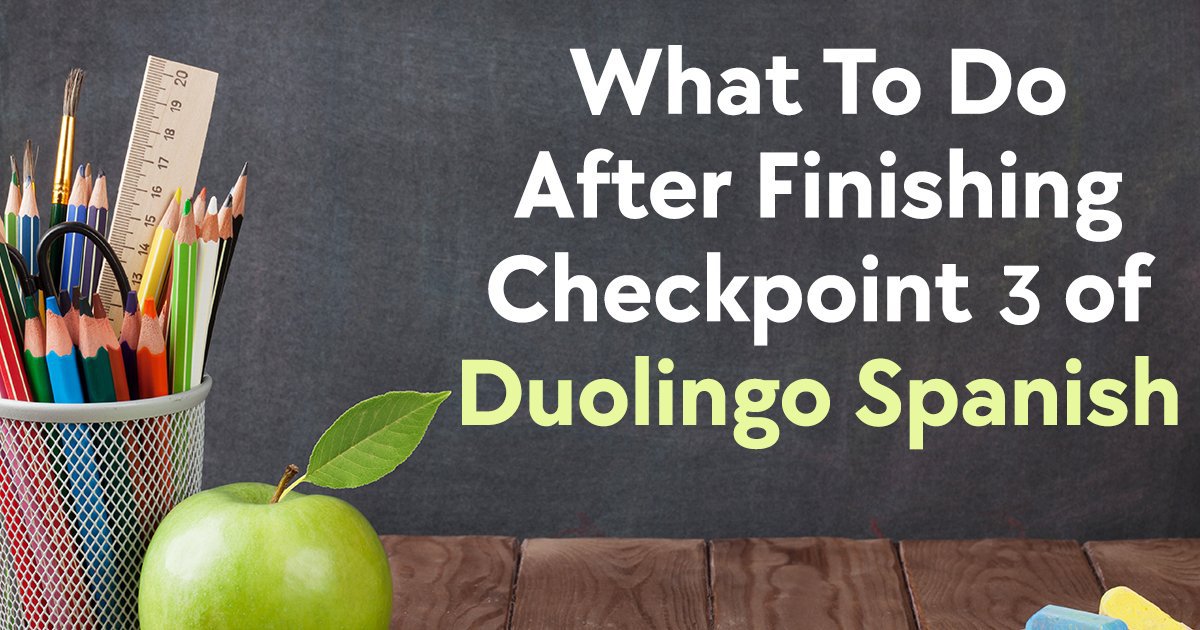 What To Do After Finishing Checkpoint 3 of Duolingo Spanish

As I searched the Internet for beginner Spanish resources, some of the resources I came across were either too easy (“The apple is red.”) or too difficult. I tried to find resources that struck the perfect balance between new and review.

For me personally, I’ve noticed when there’s too much new vocabulary, I shut down/forget it all. But, if the vocabulary tends to be repetitive or if I can pick up on quite a lot of it, it’s more likely to stick in my long term memory! Here are a variety of Spanish resources I’ve found that are perfect for when you’ve finished checkpoint three of Duolingo.

As I’ve progressed, I try to use Duolingo on desktop more (they have a “harder” option, rather than just clicking tiles). I also try to repeat sentences to get used to speaking more.

This Youtube channel has slow-speaking, visual clues that are PERFECT for this level.

I knew I wanted to learn Spanish through movies and watched Mulan in Spanish. I picked out a few words but honestly knew I wouldn’t have been able to follow along without knowing the storyline beforehand. I found Disney Junior shows, which is Disney for preschool/kindergarteners. I enjoyed “Handy Manny” and “Doc McStuffins” and watched them in Spanish with English subtitles. I was having a hearing problem but seeing the words in English forced me to recognize the Spanish and I picked up more words. The episodes are short (15 minutes) and the vocabulary is repetitive and simple.

By accident, I happened to turn on “Minuto Para Ganar” (Mexico’s Minute to Win It). I actually picked up several vocabulary words I knew AND learned new words, since the vocabulary was very repetitive. I definitely want to look into more Spanish game shows.

This site has translations (better than Google translate), conjugations, pronunciations (slow and normal) of every Spanish word. They have vocabulary lists, quizzes and you can also make your own flashcards.

From colors to the bathroom to telling time, this site has simple quizzes to test your vocabulary. This is great for review.

Spanish Pod has a mix of early beginner and beginner Spanish resources. Some of it’s free, some paid, but all are great!

Spanish Playground has simple stories in SLOW Spanish. After finishing checkpoint two of Duolingo, I was able to decently follow along with the storyline. Start with season 1. After finishing Duo’s checkpoint 3, I felt even more confident. Their website also has free comprehension quizzes.

These super-simple podcasts (with text) have classic fairytales in slow Spanish.

This list has the 100 top used verbs in Spanish. I know many of these from Duo (at least the original forms), but I’m wanting to really solidify them all in mi memoria. 🙂

This YouTube video covers the first 100 numbers in Spanish. Here’s another guide of numbers 1-100 with SpanishDict. Then, quiz yourself at Spanish Dict.

For numbers 101, here’s the guide from SpanishDict and the quiz.

This website has loads of informative articles that explain Spanish grammar concepts.

I love this app that encourages language learners from all over the world. Simply upload an audio clip of yourself speaking Spanish or type written Spanish and have it corrected (or your questions answered) by native Spanish speakers within minutes.

This is a fun app to aid with hearing through your favorite songs. Each song has 4 levels (beginner to advanced). Listening to music repetitively is helping give me a feel for Spanish rhythm and grammar patterns. You can “fill in the blanks” for your favorite Spanish songs. “Mañana es Too Late” “Sola” “Dónde Están Corazón” are some of my favorite slower songs.

Lirica has a great Youtube channel with songs that have English and Spanish lyrics. Their app takes songs and dissects them line by line with meaning, pronunciation, and vocabulary. The app doesn’t have as many songs as Lyrics Training, but it’s well worth your time.

This website has the lyrics in English and Spanish right next to each other which makes things easy.

Who knew Luis Fonsi had a ton of love songs before “Despacito?” (He even recorded a Spanish version of the Lion King’s Can You Feel the Love Tonight.) Music is such a fun way to learn vocabulary and grammar. Juanes, Jesse and Joy, Dvicio, old Luis Fonsi, Morat, J Balvin, and Disney have been some favorites for easy-to-follow Spanish.

Randomly speaking throughout the day

I randomly speak Spanish to myself throughout the day – perhaps what I’m doing or what I plan to do. Is it cringe-y? Yes. But, it helps me think about Spanish throughout the day. I’ve seen some people write out their grocery lists in Spanish – I hope to get to that level soon.

Children’s Books At the Library

I highly recommend children’s easy readers in Spanish. You can often find the English equivalent at your library too. The first post I wrote, resources after you finish Duolingo’s checkpoint 2, has more ideas too.

This blog post really helped me with memorizing vocabulary.

Super Holly has a lot of videos in English and Spanish, some are the same video, so you can watch the Spanish video and then go back and watch the English version. She shares her story in the video A Gringa Growing Up in Mexico. She also has fun videos about English and Spanish grammar, language, and culture.

I also really liked her video “45 difficult words to pronounce in English” for Spanish speakers. Whenever I’m struggling with Spanish concepts that Spanish speakers find easy, I have to remember the opposite is true too. 🙂

Luis goes to different places (China, Japan, etc.) to try street foods. His YouTube videos are fun and he talks relatively slowly. You can figure out a low from context.

Easy Spanish has street interviews with people and short Spanish videos. The vocabulary tends to be repetitive and has subtitles in Spanish and English. 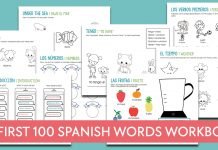 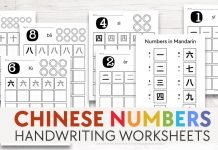 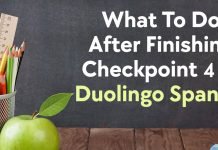