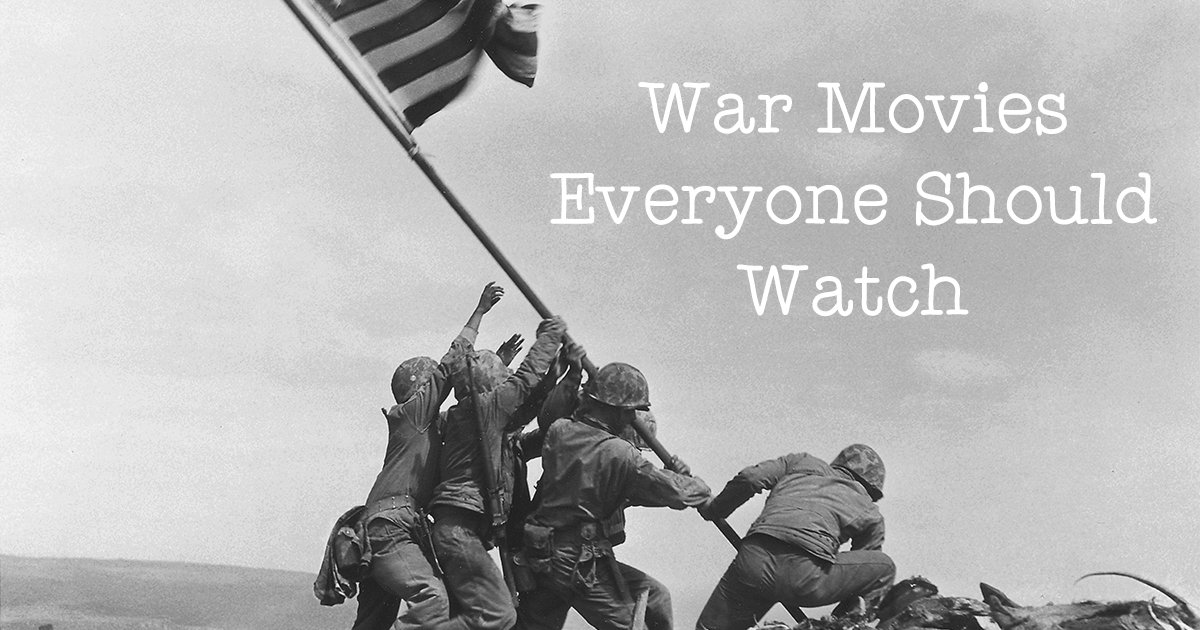 War Movies Everyone Should Watch

I’ve always admired great war films and wanted to compile a list of my favorites. Throughout this list, I wanted to highlight the individuals featured and focused on true stories, with a few of my favorite classics thrown in.

This black and white film made in the 1940s might not be as epic as today’s modernized war films, but Sergeant York is an amazing story of a Medal of Honor recipient. York battled alcoholism before becoming a Christian.

Based on the YA novel, War Horse is one of the few PG-13 films on this list and is great for preteens. If you’re a fan of the movie, you may enjoy the documentary War Horse: The Real Story.

I still haven’t seen this one yet – but 1917 is sure to join the ranks of top war films. Two British soldiers must deliver a message across enemy territory to stop an attack.

This version of the retelling of the Battle of Mount Austen portrays the experience of the C Company soldiers, 1st Battalion, 27th Infantry Regiment, 25th Infantry Division of the United States Army as they fight to seize Guadalcanal from Japanese forces.

As a young boy, Louie Zamperini makes it into the 1936 Summer Olympics, setting the record for the 5000 meter race. Later, while serving as a bombardier in the U.S Army, he’s captured by Japanese forces and taken as a prisoner of war.

The film follows his story as he transitions from an Olympian with all the strength and courage in the world to a prisoner of war, struggling to survive. I didn’t enjoy the movie nearly as much as I loved the bestselling biography, but it’s still a worthwhile movie. It’s also rated PG-13 and does not have as much violence as other movies on this list. (There is also a Young Adult adaption of the book.)

Eric Lomax, a British officer during the Second World War is capture by Japanese forces in Singapore being forced into a POW camp. While there, he’s forced to work on the Thai-Burma Railway and experiences all sorts of torture and struggles. This film follows Lomax’s experience as a POW as well as the aftermath of his trauma. It can be brutal at times but is an excellent story of forgiveness.

Hacksaw Ridge is easily the goriest war movie I’ve ever watched, but one of the most powerful. (there’s also almost no sexual content or profanity)

During the bloody Battle of Okinawa, conscientious objector Desmond Doss helped over 75 men reach safety by bringing them down the steep cliff Hacksaw Ridge overnight. After each man was brought to safety, Doss prayed, “Lord, help me get one more.”

This highly-rated 10 part Steven Spielberg epic is mature but a must-see. The series follows Easy Company from D-Day to the end of the war. Each episode opens with the real men of Easy Company talking. Each episode brings so many great discussion points about character, leadership, and heroism.

The first 20 minutes of this movie, set during the Battle of Normandy, are alone worth watching in this stunning collaboration between Tom Hanks and Steven Spielberg. It’s a classic filled with the horrors of war, patriotism, courage, and sacrifice.

We Were Soldiers covers the Battle of la Drang, the first major battle between America and North Vietnam.

Dieter Dengler, an American army pilot, is captured by communist forces and held in a camp in the Laotian jungle. He and two other prisoners endure much at the camp and eventually escape. Traveling through the thick jungle proves to be another challenge the men must face if they want to survive. There’s also an old documentary about Dengler’s life, Little Dieter Needs to Fly.

American Sniper is based on the memoir by Chris Kyle, American hero. I particularly appreciated this film’s focus on PTSD and life after combat. Sometimes, war movies can “glorify” the bravery and heroism of war. American Sniper isn’t afraid to tackle some of the tough and gritty parts of war: PTSD, struggling personal relationships, and difficult moral decisions.

After being ambushed, Marcus Luttrell was the “lone survivor” in a covert mission gone wrong. The movie dramatizes some parts a bit, but I loved Luttrell’s memoir.