Discover the heroes of the Vietnam War in this collection of true stories about several brave young men. Together they survived ambush, kidnapping, entrapment, and more. Some lived to tell the tale later, some did not. All counted the cost and deemed their sacrifice worth it. 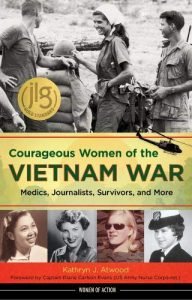 Courageous Women of the Vietnam War by Kathryn J. Atwood

This book chronicles the lives of several women who risked their lives for freedom during the time of the Vietnam War. Read about journalist Kate Webb, who later escaped a prisoner of war camp after 23 days in captivity, Le Ly Hayslip who left Vietnam for America with a dream to found a nonprofit, Lynda Van Devanter, a nurse working on the front lines, and many more brave women who played a part in the war effort.

What was the Vietnam War? (Who Was?)

Readers will gain a well-rounded point of view after delving into this informative book about this much-contested war. Giving fair play to all sides, the author helps readers gain an understanding of the reasons the U.S. decided to enter into the conflict, the loss of American troops during the fighting, and the eventual defeat and lasting impact of the Vietnam War.

The Vietnam War: A Step Into History by Steven Otfinoski

In the midst of the loose and free-loving sixties, the United States faced an important decision. Should they send troops to combat the rise of communism in Southeast Asia or stay safe on their own shores? When young men began to join the fight in the jungles of Vietnam, many citizens started protesting the fight they believed should not be theirs. As students read this book, they will discover the war itself, the conflict threatening to boil over at home, and the mark that the U.S. defeat has left on our country’s history.

A poor German boy who emigrated to the United States as a young man, Dieter Dengler soon found himself crossing the ocean again, this time to serve in the skies over Laos and Vietnam as a U.S. Navy pilot. When he is captured and taken to a camp in Laos, Dengler’s indomitable spirit and his courage help him to eventually leave alive, only one of nine POWs in Laos to do so.

My Name Is America: The Journal Of Patrick Seamus Flaherty (My Name is America)

Patrick is sent to aid in the fight against communism in Vietnam. Meanwhile, his sister remains at home, protesting for peace. As the war drags on, the fight on the home front to end the futile war continues and Patrick struggles to rise each day as he waits for tragedy to strike. 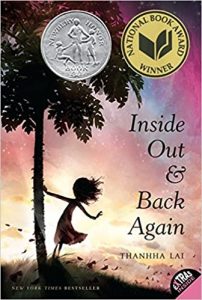 Inside Out and Back Again by Thanhhà Lai

Ha and her family have always lived in the southern Vietnamese city of Saigon. But when war reaches her own doorstep and the city falls to communist forces, Ha’s family is forced to move. While Ha searches for the true meaning of home, she and her family brave the ocean waves in a small boat, escaping to a new future.

Mai, a Vietnamese-American who also goes by Mia, finds herself confronting her family’s Vietnamese heritage and culture for the first time when she and her grandmother make a return trip to Vietnam to find out more about Mia’s grandfather’s involvement in the conflict. This coming-of-age story masterfully weaves Mia’s growing cultural awareness, questions, and sense of belonging into its thoughtful prose.

Four friends join different branches of the military during the Vietnam War. These stories don’t shy away from the horrors of war, but still are appropriate for ages 11+.

The Wednesday Wars by Gary Schmidt

New York middle schooler Holling is struggling to meet his father’s high expectations, find his place in a school full of Catholics and Jews as the only Presbyterian, and muddle through Shakespeare in his solo lessons with his teacher on Wednesday afternoons. The Vietnam War, the shooting of President Kennedy, and the assassination of Martin Luther King Jr. form an important backdrop as he learns more about himself and the people around him. 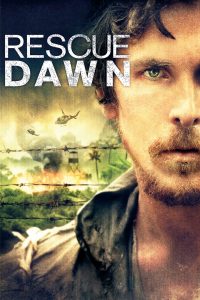 Dieter Dengler, an American army pilot, is captured by communist forces and held in a camp in the Laotian jungle. He and two other prisoners endure much at the camp and eventually escape. Traveling through the thick jungle proves to be another challenge the men must face if they want to survive. Based on a true story, this movie is rated PG-13 for profanity and violence (contains little sexual content).