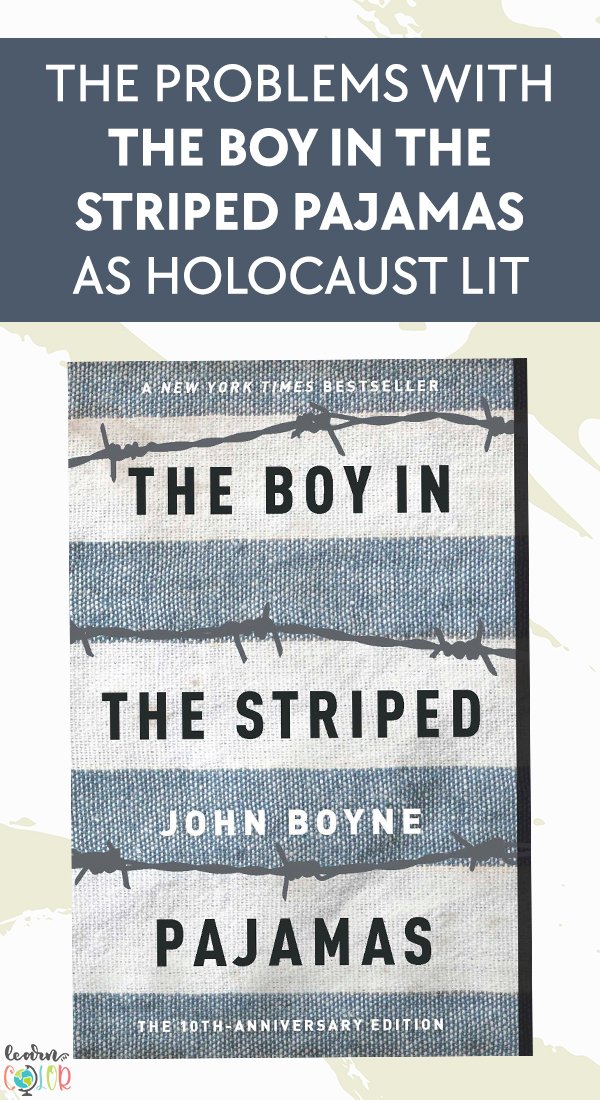 As an educational blog that frequently recommends Holocaust movies, a topic that gets brought up quite often is The Boy in the Striped Pajamas. I don’t actually recommend this book for students to use while studying the Holocaust for several reasons. I’m not alone in my opinions, and Holocaust survivors have slammed this book and movie as being emotionally manipulative and flat out deceptive.

I do NOT want this post to seem like it is attacking anyone who likes the book or who has taught using the book. This book is a wide bestseller and insanely popular.

The Boy in the Striped Pajamas by John Boyne tells the story of the friendship between the German son of a Nazi officer and a Jewish boy in a concentration camp. Bruno, son of a high-up Nazi official, moves to a new home with his father who has recently been promoted to oversee the camp of prisoners. After some exploration, he discovers a long barbed-wire fence stretching into the distance. His curiosity gets the best of him, and he gets closer and closer to the fence, trying to see what lies beyond.

Bruno gets closer and discovers that, to his surprise, the speck is actually a boy. The boy, Shmuel, about his age and also wearing the pajama uniform, is living out a miserable existence worlds away from his own. The two form a friendship through the fence that divides them, unknown to Bruno’s father.

One day Bruno decides to enter into the world of his friend, ditching his own clothing at the fence and donning the striped cloth that everyone in the camp wears. He enters the camp and is accidentally rustled into a group of children being herded to the gas chambers. Bruno’s father searches miserably for his son at home, eventually finding the discarded pile of clothing near the barbed wire fence and dissolving into a furious storm of regret and torment.

So, what’s wrong with it?

This book certainly provides an engrossing and heartbreaking story for readers fascinated with the Holocaust. It also provides several thought-provoking scenes and encourages readers to see through the Nazi uniform and to the father, husband, and human beyond.

One of the main arguments for the book is its theme of innocence. Bruno, as a school-aged child residing in Germany and the son of an important army man, has never heard of Jews or Hitler. He doesn’t appear to have any understanding of the war going on around him or the issues therein.

This is impossible as Bruno would have been likely involved in a Hitler Youth group.  Antisemitism was explicitly taught in schools at the time, so he and his sister would have had at least some knowledge of the state of the world around him. While extensive brainwashing took place, youth were aware of what was going on, even if they were given a skewed version of it.

This allows young readers to believe that the average German citizen had no knowledge or understanding of the true situation, and if only they had known, they would have done something. (As Bruno later does in this story) This is just not true.

Everyone knew Jews were banned from public places, being either driven out, killed, or imprisoned.

A similar problem lies with Shmuel. Many victims DID resist and fight their oppressors in creative and self-sacrificing ways. (One favorite book for middle schoolers is Beyond Courage by Doreen Rappaport, which gives dozens of examples of resistance.) If Bruno could get under the fence, why didn’t Shmuel just go under? In fact, why didn’t EVERYONE just go under and leave?

At Auschwitz (why does Bruno call it “out-with,” English words?), the sad reality is that children like Shmuel would have been killed in the gas chambers upon arrival. Practically the only way he would have survived the initial selection is if he was chosen for medical experiments. (Eva Kor was a child survivor of medical experiments with a great memoir.)

And ANY person at ANY of the extermination camps, kid or not, would NOT have had the chance to sit for extended periods by the fence. The fences were filled with electric bolts and armed guards in watchtowers were guarding the fence 24/7. Getting near the fence meant getting shot or committing suicide by touching the fence.

Some camps were more lenient, such as Bergen-Belsen. However, these camps did not have gas chambers. If the book was set there, then the purposefully shocking ending wouldn’t have been able to happen. That is my biggest issue with the ending: it’s meant to invoke a strong emotional response based on something historically inaccurate.

It’s fiction. Can’t it still be taught in schools?

In short, this story is unrealistic to the point of being embarrassing to survivors. In this age when, sadly, antisemitism is still rampant in many places, false tales hurt those who made it through the horrors of the Holocaust and take the stage when true stories should be elevated. The Auschwitz Museum and Memorial has spoken out against it.

One example of this is the children’s picture book Angel Girl by Laurie Friedman, which was based on Angel at the Fence. This “true love story set during the Holocaust” was one that was featured on Oprah – and was ultimately revealed to be fake. The man had claimed a girl had given him apples across a fence in a concentration camp and the two later met on a blind date in America. None of it happened. His memoir and movie deal were canceled, and I believe the picture book was recalled, but my library ended up with a copy.

A final example is the NYT Bestseller The Tattooist of Auschwitz (see my full review here). Not only was this “fictionalized memoir” unrealistic, it’s been a BESTSELLER and people are believing many of the events happened. The Auschwitz Museum and Memorial released a statement saying they cannot recommend the book due to the high number of inaccuracies. If the point of learning about the Holocaust is to honor the victims, then it might be important when a particular book is getting slammed.

I’m not opposed to Holocaust fiction and I’ve read several incredible fiction novels that do justice to the subject. For example, the United States Holocaust Memorial Museum had an exhibit for the fictional Daniel’s Story by Carol Matas. Daniel accurately represents the life of a teenager in Auschwitz and his life was heavily inspired by Elie Wiesel and Anne Frank.

Likewise, there are some fictional Holocaust memoirs (stories based on true stories but slightly fictionalized to make it more engaging/because not all details may be remembered) like Schindler’s List or Prisoner B-3087.

Even better, there are so many Holocaust memoirs and accurate stories for every age range. Readers really looking to understand the horrors experienced by those imprisoned in camps and the courageous spirit that kept them fighting day after day would do better to check out some of the true stories that more accurately display the times and the resiliency of the human spirit.

Irena Sendler, Corrie ten Boom, and Anne Frank are just a few examples of the horrors, indomitable human spirit and self-sacrifice that are essential in the study of the Holocaust. The Boy in the Striped Pajamas is not. The true stories of the amazing Jewish people who endured the worst of humanity and the heroes who risked their lives to help them deserve to be told, read by many, and remembered for generations to come.

A new study showed that over 50% of Gen Z and millennials in South Carolina couldn’t answer basic questions about the Holocaust. I rarely believe these numbers to be as high as these limited studies claim, but the truth remains: the Holocaust needs to be taught in schools.

I recently learned that on Twitter, fake news travels about six times faster than real news. Why? It’s controversial, it tugs on people’s emotions, and it’s attention-grabbing.

The Boy in the Striped Pajamas certainly tugs on emotions, and it honestly feels like emotional manipulation while doing a disserve to Holocaust victims, survivors, and rescuers.

For resources on teaching the Holocaust, check out this list.

For Holocaust books for grades 4-9, check out this list.