Learn more about the history of pilgrims with these non-fiction and fiction pilgrim books for kids, including books about Thanksgiving.

A companion to Magic Treehouse’s Thanksgiving on Thursday, this nonfiction work answers commonly-asked questions about the pilgrims’ daily lives, their survival during that first harsh winter, and their eventual partnership with the Native Americans who saved their lives.

What Was the First Thanksgiving? by Joan Holub

Part of the fan-favorite What Was series, this book explains the events that led up to the three-day celebration that the Native Americans and the pilgrims shared. This extended feast made history and became an annual tradition that we know as Thanksgiving. 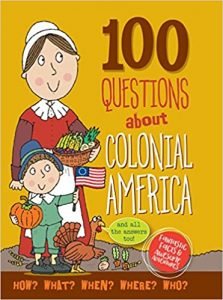 If you’ve got questions about what life was like in the New World, look no further! This book has answers to all of the ‘whys’ and ‘hows’ you’ve ever wondered!

The Dreadful, Smelly Colonies: The Disgusting Details about Life in Colonial America by Elizabeth Raum

Beginning a life in a strange new land was no piece of cake for the colonists. They had to deal with rodents all around, infrequent baths, dirt-caked clothes, disease, and more. This book leaves out none of the dirty details of life in the colonies.

John White left a colony of men, women, and children in the newly settled area called Roanoke and set off on a return trip to England for supplies to bolster the small band for the winter. After three years, he returned to find the settlement abandoned and only a few clues as to the cause of disappearance: CRO carved into a tree and CROATOAN carved into a post. Theories abound to this day about the mysterious event. Piece together the clues and see if you can be the one to solve the mystery!

The Voyage of the Mayflower by Allison Lassieur

Written in a fast-paced graphic novel form, The Voyage of the Mayflower explores the motives, successes,  and failures of the pilgrims who risked it all to begin a new life in a strange land and set up a colony there.

If You Sailed on the Mayflower in 1620 by Ann McGovern

Factual and engaging, this account helps put young readers in the shoes of the pilgrims and sailors who made the arduous journey from England to the New World. 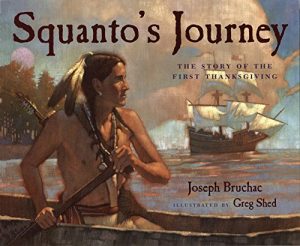 Squanto’s Journey: The Story of the First Thanksgiving by Joseph Bruchac

A good first biography that tells the story of Squanto, the Native American man who became the bridge between the colonists and the native people of the land.

Squanto and the Miracle of Thanksgiving by Eric Metaxas

Squanto and the Miracle of Thanksgiving tells the true story of Squanto, a Native American from present-day Massachusetts. At a young age he was kidnapped, taken to Spain to be sold into slavery, and eventually brought back to America just in time to be the miracle the pilgrims needed to survive in the harsh new land.

John Goodman and his pair of canine companions have made the 66-day journey across the ocean with other pilgrims, hopeful at the prospect of a new beginning in a new land. Together, the trio finds fast friends among the amiable Wampanoag tribe and celebrate the first harvest after a long winter of loss.

Jack and Annie enter the treehouse and find themselves hurtling through time back to 1621. Once there, are enlisted by the pilgrims to help prepare for the first Thanksgiving feast, but they seem to be doing their new friends more harm than good in their efforts to assist.

A Journey to the New World: The Diary of Remember Patience Whipple, Mayflower, 1620 (Dear America) by Kathryn Lasky

Remember and her friend Hummy are traveling on the Mayflower on their way from England to the New World. She writes in her diary about her experiences onboard the ships as well as her interactions with other settlers and Native Americans in the colony.

The year is 1609. Elizabeth spends 71 long days at sea with the first group of women and children to make the journey to settle in the New World. She keeps a faithful record of events to send to her twin brother, whose poor health kept him from making the trip. Through her fictional entries readers can be immersed in the exciting and sometimes harrowing experiences of early American settlers. 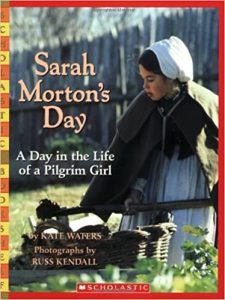 Young Sarah Morton lets readers into her world to experience leisure and hard work in the year 1627 in an early American settlement.

Samuel lives in one of America’s first settlements, and the day has come to harvest the rye fields. It is the first harvest that he is old enough to participate in, and Samuel can’t wait. Learn about daily life for early settlers through this bestseller’s engaging photographs.

Follow Tapenum, a young boy from the Wampanoag tribe living near Plymouth Plantation, as he goes about his day. He gathers food and enjoys time with friends while contemplating the changes that have come since the arrival of the pilgrims.

On the Mayflower by Kate Waters

Experience the trials and anticipation of two children as they traverse the ocean on the voyage from England to the New World aboard the Mayflower. Contains photographs of the Mayflower II. 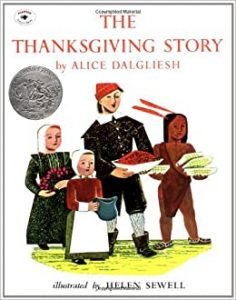 The Thanksgiving Story by Alice Dalgliesh

In this Caldecott award-winning story, a brave family boards the Mayflower and sets out for America. When they arrive in the New World, they experience hunger, cold, sickness, and uncertainty. But with strong family support and the unexpected kindness of the Native American tribes nearby, the Hopkins begin to feel hopeful that this strange new land will become a home.