From Vivaldi to Mozart, learn more about famous composers with these picture books. Use them to teach music or music history.

Picture books are such an excellent introduction to everything…including famous composers and musicians!

Italian composer Vivaldi’s most notable work, Four Seasons, is showcased here in a detailed account of four orphan girls who performed his work for an adoring audience. When Padre Vivaldi was separated from the children he had grown to love at the local children’s home for a while, he wrote Four Seasons as a way to mark the passing of time.

For the Love of Music: The Remarkable Story of Maria Anna Mozart by Elizabeth Rusch

Siblings Maria and Wolfgang Mozart became renowned across Europe for their musical giftings and had opportunities to perform in front of royalty from age 12 on. The two were extremely close and similarly talented, but as they grew older, the pressure increased for Maria to marry and Wolfgang to become more successful than before. Society imposed itself on them in ways that might have made for a different outcome had the siblings been born today.

This books will introduce children to this great American Modern composer and trace the development of his most notable piece: Rhapsody in Blue.

Beethoven searched for inspiration for a new symphony–and he found it in the-larger-than-life Napolean Bonaparte. But by the time he finished his composition, the hero had turned into a political scandal by placing himself on the throne as Emperor of France. Beethoven, upset and angry, ripped the music to pieces. Luckily, one of his friends rescued a copy of the work.

Duke Ellington tries to attempt the impossible–transforming the classic Nutcracker Suite into in a jazzy piece. Some of the band don’t believe it can be done, but Ellington is out to prove them wrong. 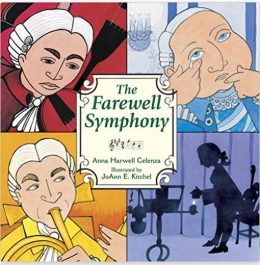 Prince Nicholas of Esterhazy kept Franz Joseph Haydn and his orchestra members nearly hostage at his summer estate, planning, composing, and performing music for parties, dinners, and even garden walks. Everyone was sick and tired of the relentless schedule, so Haydn composed a special musical score to convince the selfish prince to allow everyone to return home.

Told from the perspective of a young J.S. Bach, this book tells the story of the famous composer and his fascination with musical patterns. His interest in and gift for music was developed at a young age and grew with time.

Erik Satie may have looked pretty average on the outside, but underneath his mind was spinning in directions most of the world could never understand. As a composer, he was even more eccentric; trying to create music that was paradoxical in every sense. He wanted music that would appeal to old and young alike and he did it in a chaotic, unique way that made his music unlike anything the world has heard before or since.

I, Vivaldi by Janice Jordan Shefelman

Vivaldi’s mother pressured him to become a priest, but his first love was always music. He wanted to please his mother, but also wanted to follow his dream, so he stubbornly held on to music while halfheartedly pursuing the priesthood.

The Story of the Orchestra: Listen While You Learn About the Instruments, Music, and the Composers Who Wrote the Music by Robert Levine

70 selections from orchestral greatness will take readers on an immersive journey through music as they read and listen about the music and composers that have made history. 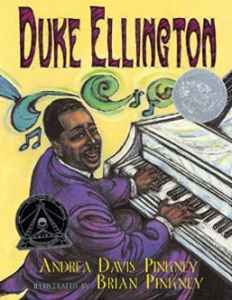 Duke Ellington: The Piano Prince and His Orchestra by Andrea Davis Pinkey

In spite of the racism that threatened to oppress him, Duke Ellington worked to overcome these barriers and became the most unforgettable jazz musician of his time. This book tells the story of this great composer through the language of lilting jazz.

The Extraordinary Music of Mr. Ives: The True Story of a Famous American Composer by Joanne Stanbridge

Charles Ives was heartbroken when he heard of a wartime tragedy: the sinking of the ship the Lusitania. He worked out his grief through his music, and in doing so, helped bring healing to himself and others who were also struggling with the loss.

Anton Dvorak heard a songbird lifting its lovely tune to the air, and soon another bird joins the first. Dvorak watches the song-and-dance that the two birds perform as they build a nest, and the composer begins to write down the lilting song on paper, then his sleeves, furiously scribbling trying not to miss a thing. And thus was born the masterpiece that is the American Quartet.

A brief introduction into the life and times of Italian composer Giuseppe Verdi. Born to a family of moderate means, Verdi attended music school and developed a real talent. Later in life, he composed several notable operas.

A professional musician at the young age of 17, Mozart left a legacy of some of the most famous and recognizable compositions in the world. This children’s biography gives a brief glimpse into the life of this notable man whose music later inspired Beethoven. 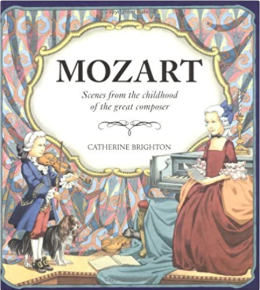 Mozart: Scenes From the Childhood of the Great Composer by Catherine Brighton

The sister of Mozart, Nannerl, tells the story of the growing up years of this child prodigy and his mishaps and mischief. Her story also hints that perhaps Nannerl would have been as famous as her brother, had it not been for the social rules imposed on women at the time.

The Other Mozart: The Life of the Famous Chevalier de Saint-George by Hugh Brewster

Stories of the Great Composers by June Montgomery and Maurice Hinson

A collection of short informational tidbits about each of the famous composers, coupled with a CD showcasing their most famous works of music.

Secret Lives of Great Composers: What Your Teachers Never Told you About the World’s Musical Masters by Elizabeth Lunday

From jailbirds, to ladies’ men, to draft dodgers, the greatest composers of all time had more to them than their musical legacies. In this intriguing work, readers will learn about the unknown and humorous sides of these musical wonders. 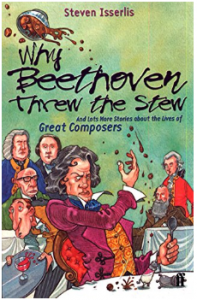 With humor and wit, readers are introduced to Beethoven, Bach, Mozart, Schumann, Brahms, and Stravinsky. This account is full of little-known anecdotes about these eccentric but genius composers.

Irving Berlin: The Immigrant Boy Who Made America Sing by Nancy Churnin

A refugee from Russia, Irving Berlin found himself in a new country, taking comfort in composing music that inspired Americans from all walks of life. Using his unique background and upbringing as a springboard, Berlin’s music eventually became the soundtrack of the United States.

This story is told in letters between a boy and his uncle. Things change for Christoph when an eccentric man moves into the apartment above his family home. What follows are moments of chaos and crazy, punctuated by spurts of great genius.

When Peter IIyich Tchaikovsky comes to the United States for the first time, he finds an unlikely friend in the seat next to him on the train. Jenny Petroff is a shy, timid child, but she and her seat neighbor find that they share a love for music and America.

Ludwig Van Beethoven: Getting to Know the World’s Great Composers by Mike Venezia

Renowned composer Beethoven is shown here in a sweet, kid-friendly depiction of his life and works of musical art. 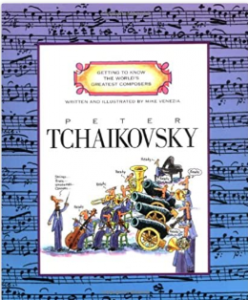 Peter Tchaikovsky: Getting to Know the World’s Great Composers by Mike Venezia

An interesting biography with hilarious illustrations that will help teach children about this great composer of ballets like Swan Lake, Sleeping Beauty, and the Nutracker.

Johannes Brahms: Getting to Know the World’s Great Composers by Mike Venezia

A short introduction to this German composer of the Romantic era who is often touted as one of the “Three Bs”, among other greats like Bach and Beethoven.

The interesting and little-known story of George Fredric Handel’s life. From playing in secret to hide from his father who didn’t want him to play, to composing famous and oft-performed masterpieces, this biography and accompanying CD will bring Handel to life.

The Music in George’s Head by Suzanne Slade

Children will learn about composer George Gershwin and his genius creation of the famous Rhapsody in Blue. George was riding on a train when the rhythmic clacking of the wheels and the wind rushing by the car sprang into a complete composition in his mind, so fast he could barely get it down on paper.

What Charlie Heard by Mordicai Gerstein

Charles Ives used inspiration from everyday life in New England to develop his own unique American sound that was surprising and unexpected. Learn about how he created his style and composed his music. 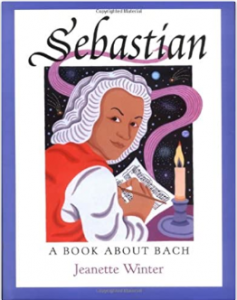 Sebastian: A Book About Bach by Jeanette Winter

Sebastian grew up a musician and when he married, he wanted to pass his love of music on to his growing family. He wrote a small book for his wife, Anna Magdalena, so that she and the children could play simple music together. Children learning music today still learn from Anna’s book, and Bach’s thousand-plus compositions live on.

Duke Ellington: His Life in Jazz by Stephanie Stein Crease

This interactive biography takes readers through the life of Duke Ellington, highlighting his music career as well as his contribution to the world of jazz. The pages also contain activities that teach how to develop your own ragtime rhythm, create homemade instruments, and dance the jazzy steps of the Lindy Hop.