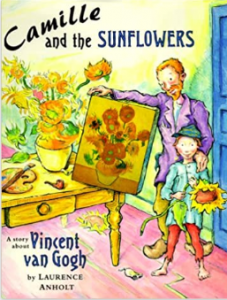 Camille and the Sunflowers: A Story About Vincent Van Gogh by Laurence Anholt

Young Camille meets a mysterious stranger when his family gifts the newcomer some furniture and a listening ear. In return, Van Gogh paints portraits for the family, and Camille brings the odd man sunflowers in a gesture of continuing friendship. Despite the kindnesses of a few, Van Gogh’s eccentric ways are too much for the rest of the town and he is driven out.

The Magical Garden of Claude Monet by Laurence Anholt

When Julie visits the countryside, she can’t help but compare it to the crowded streets of her Paris home. She loves the quiet and the gardens of Giverny, and while walking through a particularly beautiful area, she befriends a man she assumes is the caretaker. The gardener, actually Claude Monet himself, takes her under his wing and spends the day with her enjoying nature’s beauty.

Degas and the Little Dancer: A Story About Edgar Degas by Laurence Anholt

Marie has dreamed her whole life of becoming a ballerina on the stage, but her dreams are crushed when her parents reveal they do not have the funds to make her plans a reality. Instead, she signs up to be an artist’s model at a ballet school, the closest thing she can get to her dream. The sculptor Edgar Degas sees her and asks her to stand for a sculpture, changing her life forever.

Leonardo and the Flying Boy: A Story About Leonardo da Vinci by Laurence Anholt

Zoro, apprentice to da Vinci, is fascinated by his mentor’s diagrams, particularly the one that depicts a flying machine. As da Vinci starts to explore the possibility of bringing his design to life, Zoro looks on with wide eyes.

Picasso and the Girl with the Ponytail by Laurence Anholt

Young Sylvette was known among her friends as a daydreamer and a shy, whimsical girl. These qualities made her perfect for the role of model when Picasso noticed her ponytail profile and asked to use it in his works of art. She ended up posing for more than 40 of his paintings, and Sylvette and Picasso developed a sweet friendship. 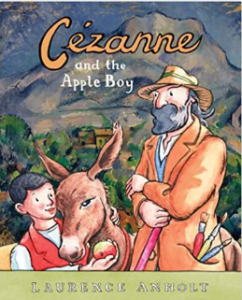 Cezanne and the Apple Boy by Laurence Anholt

Young Paul joins the elder Paul Cezanne on a painting expedition in southern France. Cezanne paints a portrait of his apple-cheeked boy as well as several landscapes they see along the journey. Most people think that Cezanne’s paintings are common-looking, but young Paul thinks they are masterpieces, and a traveling art dealer sees something in them as well, leading to eventual fame for Cezanne.

Frida Kahlo has been commissioned to paint the portrait of young Mariana. When Mariana enters Frida’s studio, she feels frightened. Frida soon puts her at ease by displaying her menagerie of pets, plethora of plants, and skads of sketches. Mariana thinks that Frida is the bravest woman in the world, but Frida thinks that Mariana is pretty courageous too.

Monique, a nurse for the elderly, enters the room of an aged Henri Matisse and is amazed at the vivid colors dancing around the room. The two develop a bond of friendship which later leads them to begin an ambitious project together. The end result–the majestic Matisse Chapel in France.

Tell Us a Story, Papa Chagall by Laurence Anholt

Twin siblings Meret and Bella love visiting their grandfather, Papa Chagall. He weaves stories for them about his life and artistry, and he tells these fascinating yarns over the course of the day the three spend together.

The Fantastic Jungles of Henry Rousseu

Henry Rousseu never took a art class, but hard work, determination, and a willingness to fail a few times served this self-taught painter well. Henry didn’t begin painting until he was 40, and it wasn’t until age 61 that his paintings began to be recognized for their greatness. His story will inspire young readers to keep on keeping on. 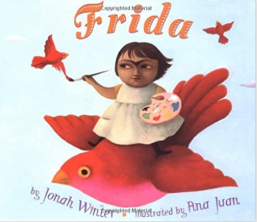 Deep loneliness, a bout with polio, and an accident involving a city bus were not enough to put a damper on Frida Kahlo’s indomitable spirit. Set in Mexico, this abbreviated biography of the famous artist’s life will encourage readers to persevere through any circumstance.

Henri Matisse began to rise in popularity as a painter, but an unexpected illness left him bedridden and unable to lift a hand to a canvas. Henri’s creativity, however, was not crippled by his sickness, and he picked up some scissors and began to cut out paper shapes, developing a new form of art.

My Name is Georgia by Jeanette Winter

Georgia O’Keefe painted big flowers and gardens from Texas to New York. This is a short biography and an interesting introduction into the life of this artist and how she discovered she had a real talent.

When was just a young boy, Edward Hopper wrote the following on his pencil case: ‘Edward Hopper–Would-be Artist’. That simple declaration drove him to follow his dream. This is his story; from childhood to notable painter.

Me and Uncle Romie by Claire Hartfield

Romare Bearden, a Harlem Renaissance artist, created collages that told stories about the neighborhoods and city in which he lived. In this book, a fictional nephew meets his artist Uncle Romie for the first time and experiences the city and the rhythm of life there through the paintings of his relative. 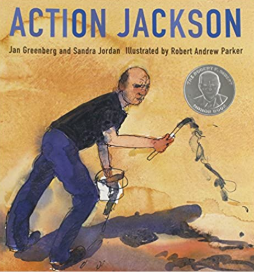 In the summer of 1950, Jackson Pollock was working on his genius project, Lavender Mist. This book lays out his unconventional methods as an artist as well as his typical day-in-the-life.

On a sunny day in Etretat, France, Claude Monet begins to develop a masterpiece. This story follows the unique creative process of this impressionist painter as he prepares a new work on the beach.

Katie and the Mona Lisa by Julie Danneburg

Katie and her grandmother set eyes on the famous Mona Lisa while touring an art museum, and the Mona Lisa steps out of the frame and begins to talk to Katie. Katie and her new friend walk the halls of the museum together, looking at other notable pieces from artists like Raphael, da Vinci, Carpaccio, and Botticelli. At each painting, a background on the work and its artist is passed on to Katie.

James Warhola, nephew of Andy Warhol, spins a story from his childhood, letting readers glimpse the artistic process of the artist who turned trash into treasures. It also explains how James’ own artistic career was influenced by his famous uncle.

Me, Frida by Amy Novesky

Frida Kahlo and her husband, Diego Rivera, left Mexico for California to further Rivera’s painting career. Stuck in a strange new country, Frida began to experiment with paints, and soon she was developing her own handicraft as an artist. 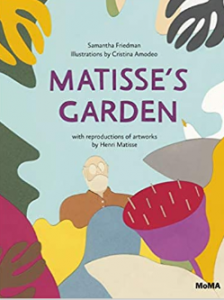 Scissors in hand, Henri Matisse cut out the shape of a bird. He studied it and decided it was lonely, so he began to cut out flowers and plants to surround it. This book tells the story of the unconventional artist with a child-like mind.

When Anna wanders away from her uncle at the art museum, she begins to befriend the artists she meets while trodding through the halls. Anna discusses art with a whole slew of artists like Rembrandt, van Gogh, Warhol, Matisse, Picasso, Chagall, Pollock, and more. With each conversation, she gains new insight into the artists and their creations.

Alexander Calder had a knack for creating mesmerizing shapes and designs out of other people’s junk and transforming the shapes into mobiles that hung and spun with a hypnotizing air. Calder, nicknamed Sandy, began creating new things out of the old at a young age, enchanting friends and family alike with his abilities. Later on, life brought him to the stage, where he charmed audiences with his circus-in-a-suitcase.

The words of Vincent Van Gogh are set next to his masterpieces, both the well-known and the more obscure. These excerpts are taken from his letters to his brother, Theo, giving us an intimate look at the artist like never before.

Wassily Kandinsky was one of the first abstract artists, and his story is told here in The Noisy Paint Box. He had a unique ability to feel colors as sounds and vice versa. This gift allowed him to create some works of art that were developed in an unprecedented style that was not popular at first. He continued to hone his craft, however, and eventually became a celebrated artist. 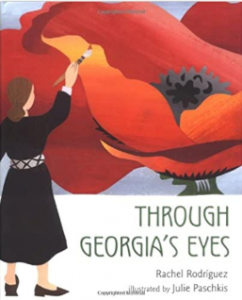 Georgia O’Keefe’s eye for minute details helped her to create masterpieces of realistic and brilliant-looking flowers that popped off the page and turned heads. This tale chronicles the life of Georgia, a born Wisconsin-ite who moved to the big city until the noises and crush of people gave her claustrophobia that sent her to the Southwest. There she learned to breathe and paint again.