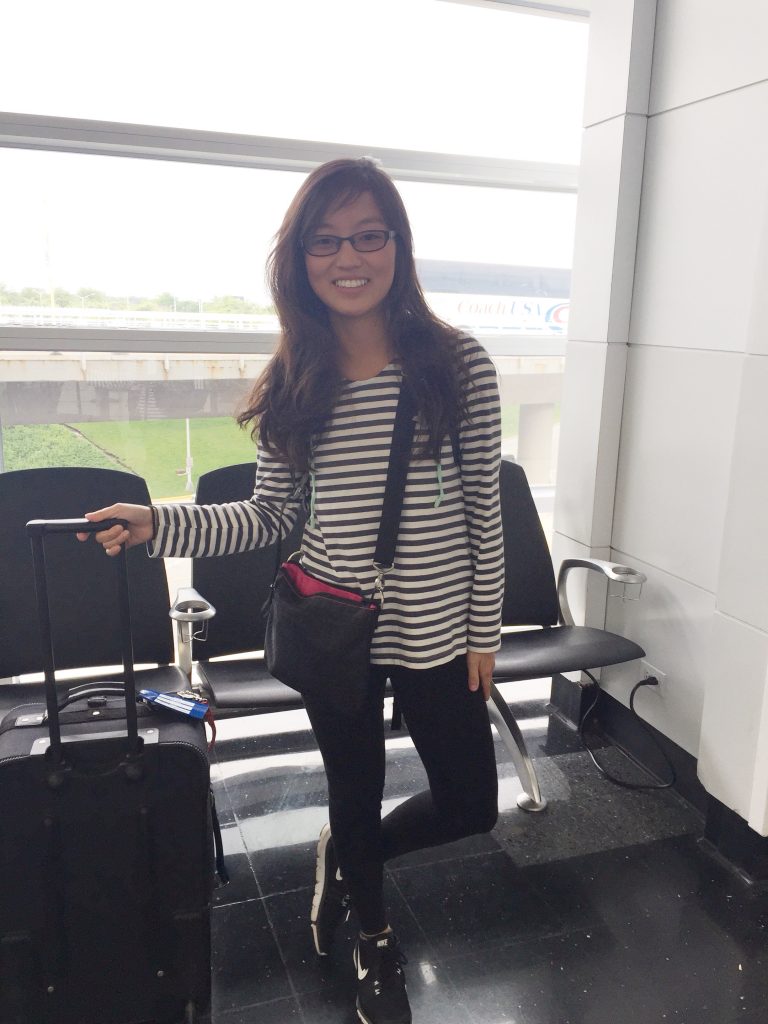 After many years of waiting, this year, I finally had the opportunity to visit Israel on a school trip!! We were there for 10 full days, and had 48 people in our group. Our group’s age range varied from college students to a few people in their 70s – the age diversity
I checked off three big things on my “must do before I die” list.
1. Visit Israel
2. Visit Yad VaShem (the Holocaust memorial museum)
3. Float in the Dead Sea
We did so much on this trip, often hitting 3-9 places a day, with the average being about 5. Here are the highlights and my favorite, most meaningful parts!

Day 0: We finally arrived at Israel! After a 10.5 hour trip to Istanbul, Turkey and a 2 hour flight to Tel Aviv, it was so exciting to finally see Hebrew! Everything before (our airline and in Istanbul) was in English and Arabic. We stayed at Yom Hashmonah, which was dedicated to eight Finnish Jews who died at the hands of the Nazis. I think it was the only building we saw that was made out of wood!

Our day started at 6:30 – bright and early! The first photo (top left) is a view outside of our hotel. There were gorgeous beautiful biblical gardens surrounding it! We did some hiking, and on a particularly steep hill, I only fell on my tush once. 🙂
We learned about ancient life – eating, gardening, agriculture, engagements, deaths, burials, and more. The top right photo is an ancient burial cave. It was customary to bury people within 24 hours of their death. We learned about the seven species of Israel and their beautiful contribution to the land of Israel. 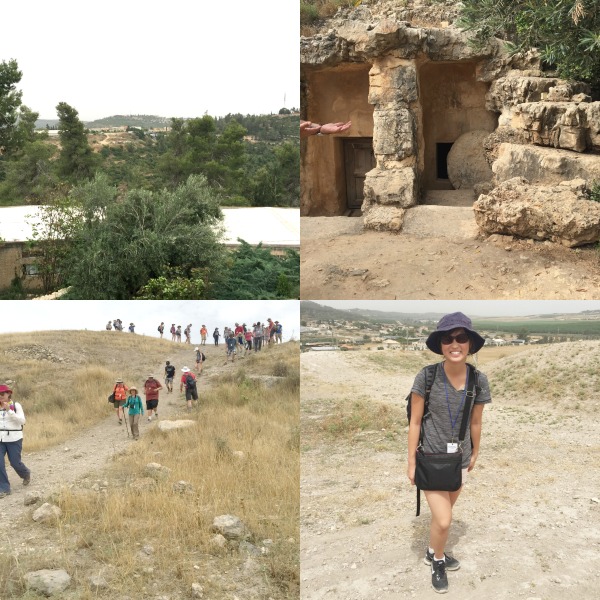 We explored some underground caves, where we saw stagnant water. We contrasted this stagnant water with running, flowing living water
Next we journeyed to a pigeon farm (bottom right), and Azekah, where David and Goliath fought (bottom right). It was here as we were reading Scripture when it finally hit us – this is Israel! It’s a crazy feeling that I’ve been looking forward to for forever. 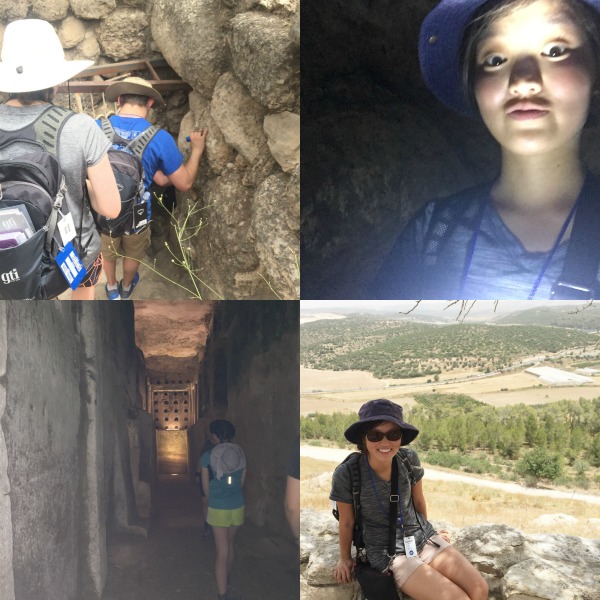 We ended our day at Beth Guvrin, a national park with the ruins of Maresha. Maresha was a city in ancient Judah. 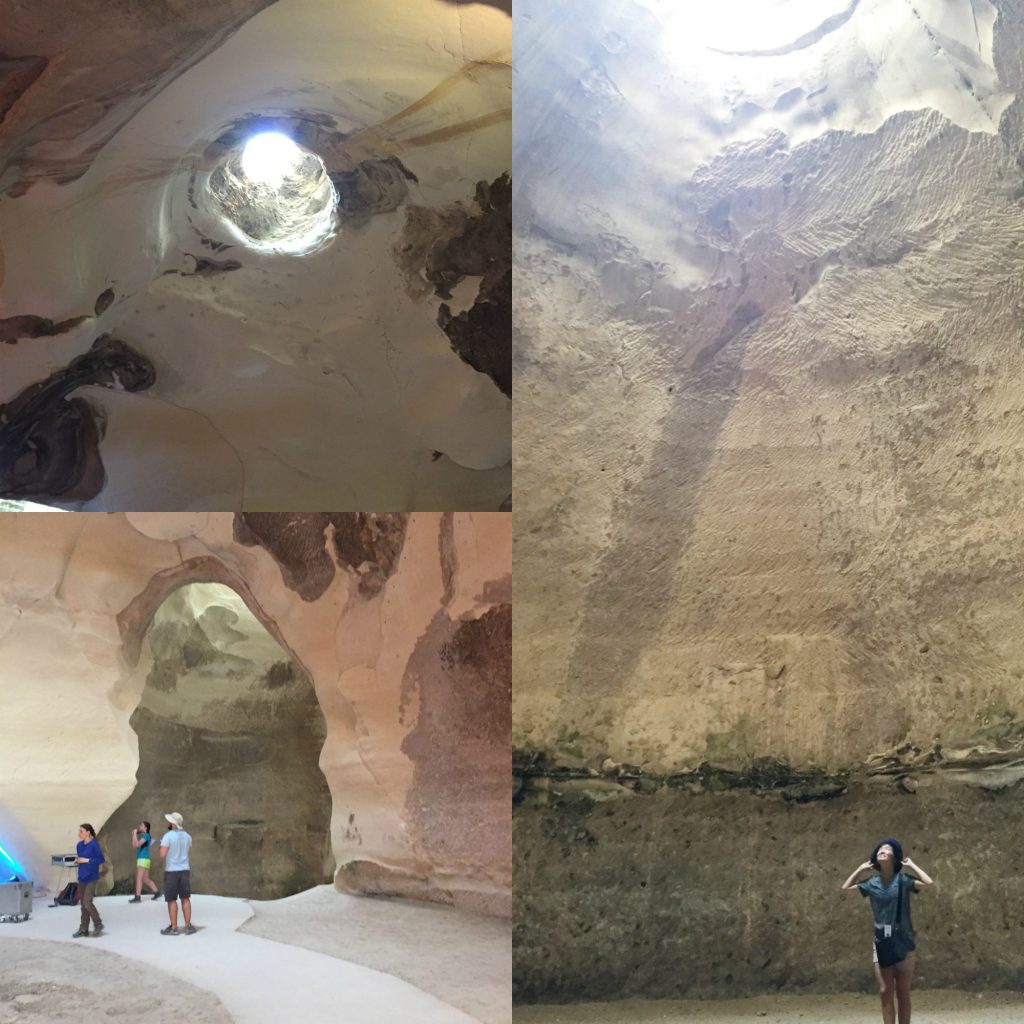 Today we visited Tel Arad, the Dead Sea, Masada, and experienced Bedouin hospitality. We also got to ride a camel!
We were planning to hike Masada, but were unable to because of the extreme heat conditions. Instead, we took a cable car up and learned about the history of Masada, which means “fortress” or “stronghold.” 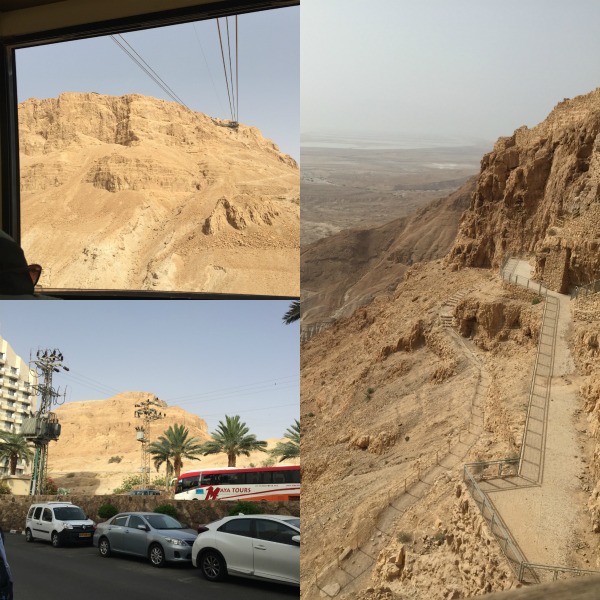 The view outside our hotel was a breathtaking view of the Dead Sea. (It’s literally dead – it doesn’t move so it’s like a warm puddle and there isn’t anything growing or living in it.) I got to float in it – which is over 10x as salty as the regular ocean!
Several women were in bikinis while swimming in the Dead Sea. This is a stark contrast with pageant queen Miss Iraq, who was getting death threats for competing in a swimsuit at the Miss Universe competition. The freedom and resilience of Israel is shown in the structures and the wide variety of lifestyles we saw – the very religious and the modern secular world. It’s hard to argue about how “horrible Israel is” when it’s the only country that I as a female have freedom. I’m no feminist, but the freedom I felt in Israel seems drastically different from their neighbors in the middle east.

The view outside of our hotel was a beautiful pool and the breathtaking Dead Sea. On each door in our hotel, I spotted a mezuzah. Deuteronomy 6 commands Israel to “write these commands on your doorpost” which the mezuzah does, literally! 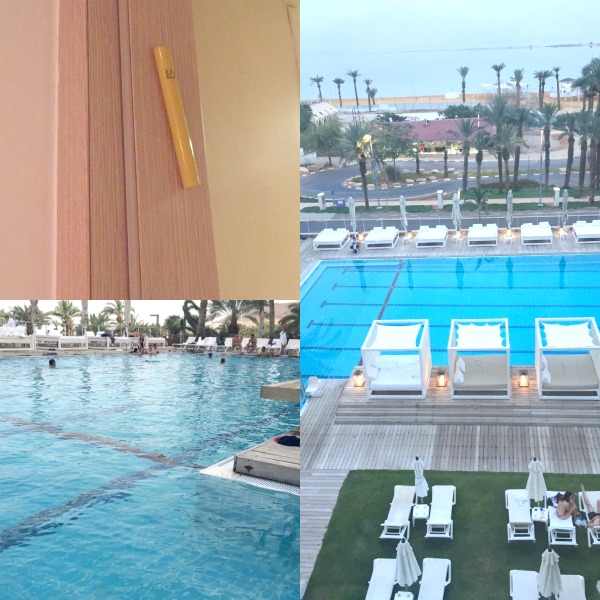 Day 3:
Today we visited Ein Gedi, Lower Jordan, and Qumran, and six people became baptized in the Jordan River!
Firstly, EIN GEDI WAS AMAZING! We saw the caves were David would have hid from Saul. After a couple days (of wandering?) in the desert, this was the first place we finally saw fresh, flowing water. I jumped in (twice) with my clothes on! 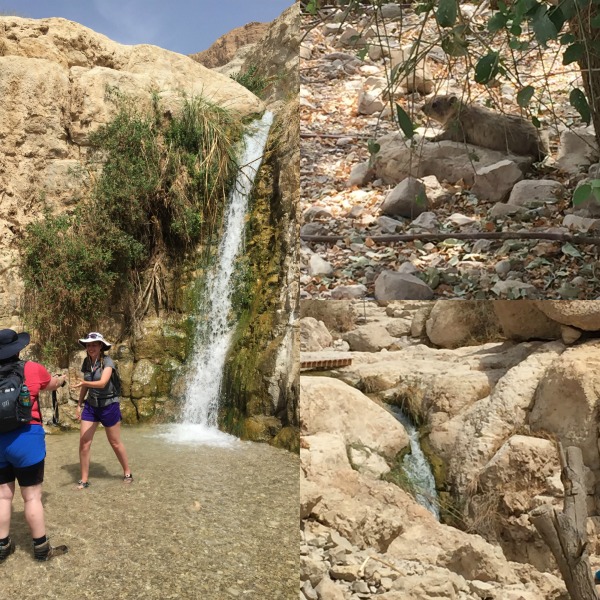 Qumran was where the Dead Sea Scrolls were found, and we learned the full significance of those documents.

At the Jordan River, I saw Israeli soldiers for the first time! The two soldiers were guarding the border by Jordan. As we sat by the Jordan River, we were only a few feet away from Jordan. Military service is required for all men for three years and women for two years after they graduate high school. After that, Israeli citizens are on reserve.
Day 4:
Today we visited Katzrin, Tel Dan, Mount Bental, and had a Shabbat dinner.
Katzrin was an ancient village where we dressed as first century Christians! We made pita bread, saw an ancient olive press, and ate a piece of wheat. 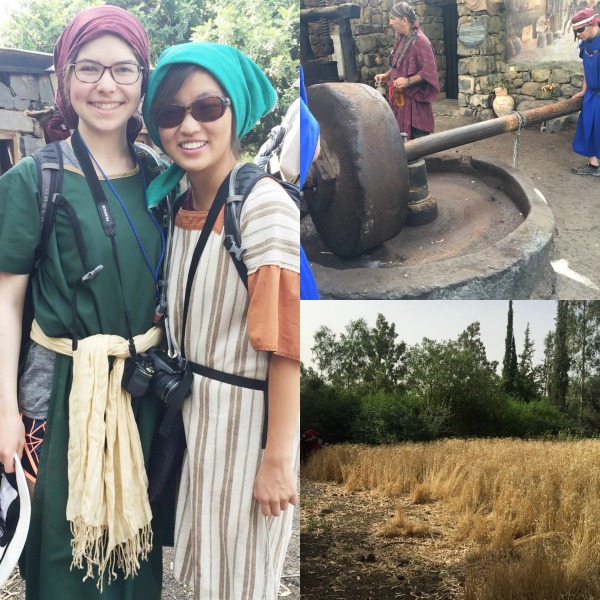 We visited Mount Bental, and saw a beautiful panoramic view of the Golan Heights. We saw bunkers and I saw a dinosaur, so of course I had to get a good picture by it.

Day 5:
Today we visited Mount of Beatitudes, Mount Arbel, Tabgha, Chorazin, and Capernaum, many of which Jesus had visited.
Mt. Arbel was one of my favorite hikes of the trip! It is in the northern Galilee. The hike was a little exhausting at first (with stairs of elevation) but the hike ended with climbing up on rocks! At its peak, it is 594 feet above sea level. 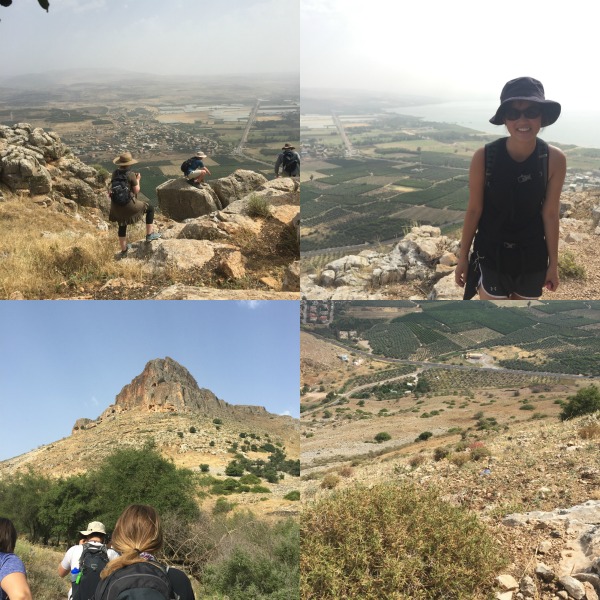 We visited a lot of other cool places, but one of my favorite places on the trip was the Mount of Beatitudes, where Jesus gave the Sermon the Mount. There, we read Jesus’ famed sermon. We spent some time to reflect and pray during this time, where I felt a strong sense of peace.

Day 6:
Today, we visited Beth Shean, Gan HaShlosha, Susita, and ended with a peaceful boat road on the sea of Galilee.
At Susita, this may be the place Jesus references in Matthew 5 a “city on a hill that cannot be hidden.” 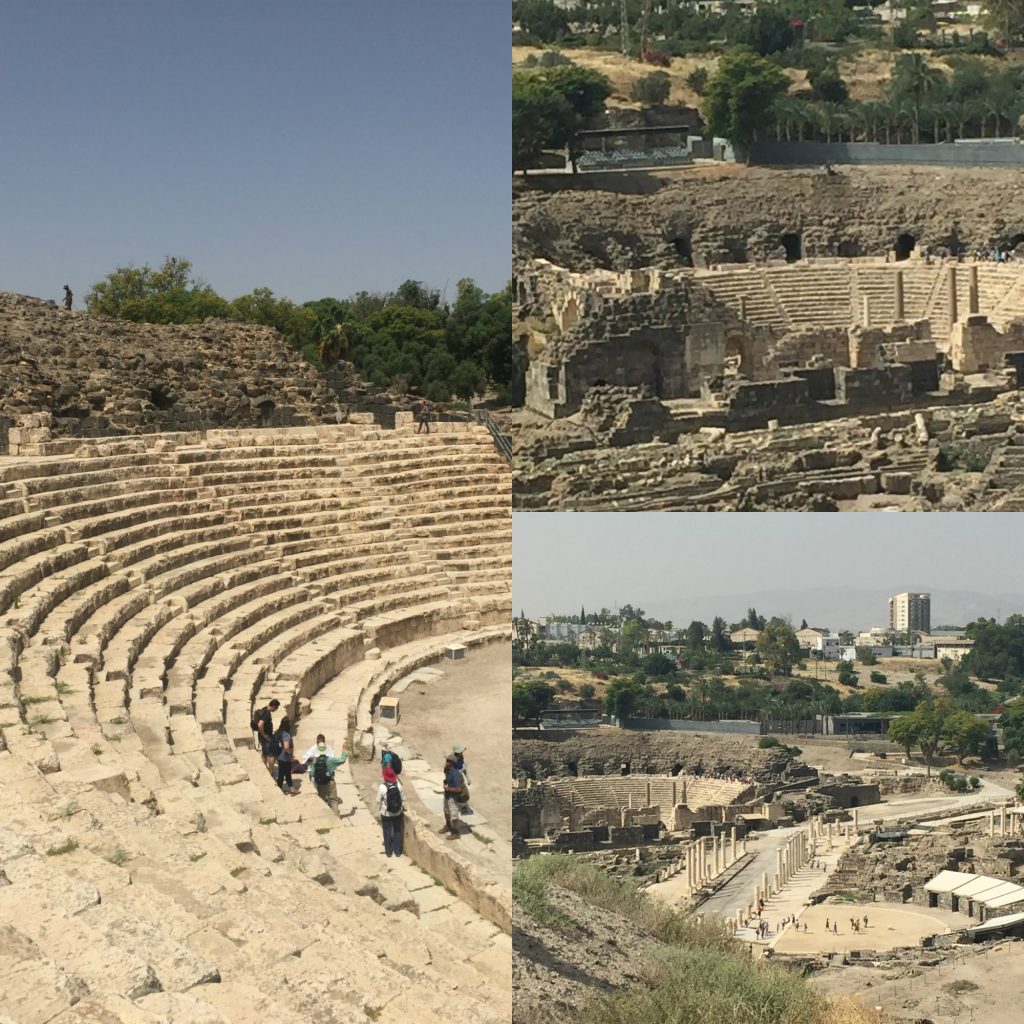 We went to Gan Hashlosha, another beautiful national park. The water temperature was perfect and clear.
We ended our day at the Sea of Galilee, which was calming and refreshing compared to the heat.
PS I summoned the courage to order this popsicle in Hebrew and paid in shekels. 🙂 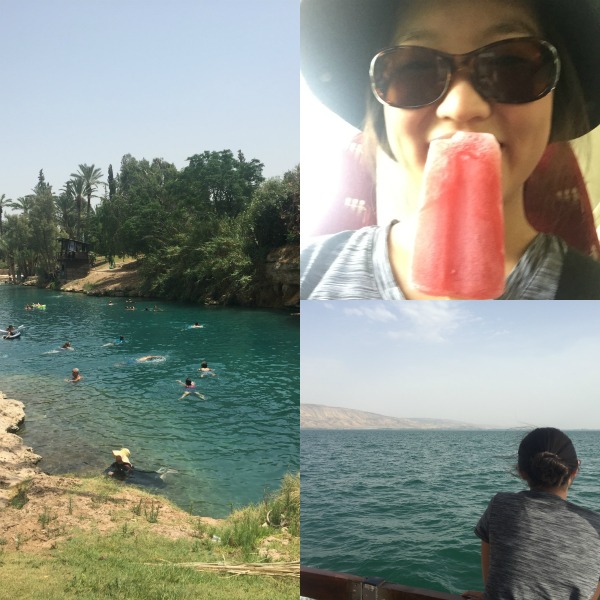 Day 7:
Today we visited Caesarea Maritima, Megiddo, Nazareth, and Mt. Carmel.
The Caesarea was my favorite place of today. We saw the Mediterranean Sea and for a brief moment I got to dip my hands in it. 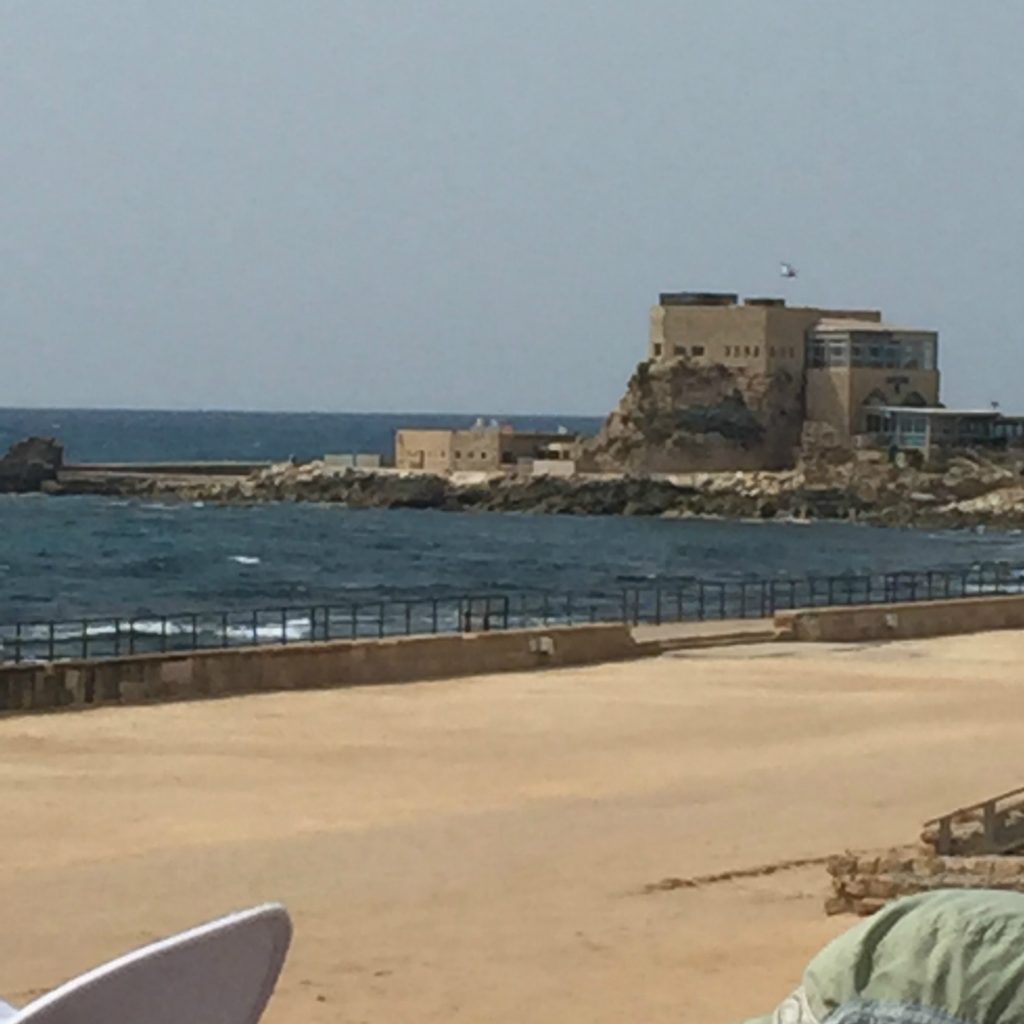 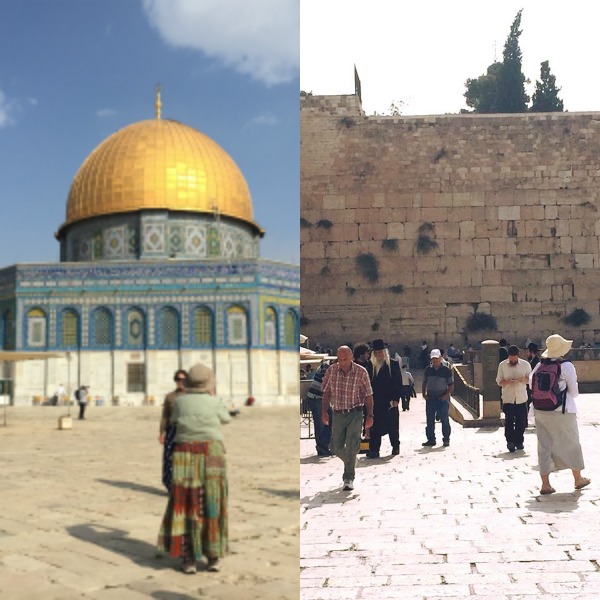 At Bethlehem, we were rushed through the cave that is supposed to have been the birthplace of Jesus. (I sadly didn’t get any good pictures.) A Catholic church had been built around it, and it was very ornate and modern looking. We did learn the manger Jesus was born in was most likely made of stone, instead of the hay/wood manger on our Christmas cards.

“If I forget you, Jerusalem, may my right hand forget its skill. May my tongue cling to the roof of my mouth if I do not remember you, if I do not consider Jerusalem my highest joy.” -Psalm 137:5-6

Day 9:
Today, we visited the City of David, Southern Steps, Hezekiah’s Tunnel, and Yad Vashem.
One of the best insights I gained from this trip is overall perspective, especially from the view of the biblical author! For example, we read Psalm 121, one of my favorite psalms. In the words of a fellow woman on the trip, when I had previously read that psalm I had the visions of lush Sound-of-Music like mountains (cue Julie Andrews singing). In reality, the mountains of Israel look nothing like that.
Psalm 23 was another favorite psalm where we gained perspective. The “green pastures and still waters” that David refers to do not closely resemble the lush view I had previously imagined. Green pastures were more like patches of grace and still waters were small brooks or pools of water. This gave a greater appreciation of scripture, as in this context why green pastures and still waters were so valuable to David was because he had to trust God to find those “right paths.”
Hezekiah’s Tunnel (mentioned in 2 Kings 20:20 and 2 Chronicles 32) was a water tunnel underneath the city of David. For 20 minutes, we were submerged in knee-length water. It hit my waist a couple of times! 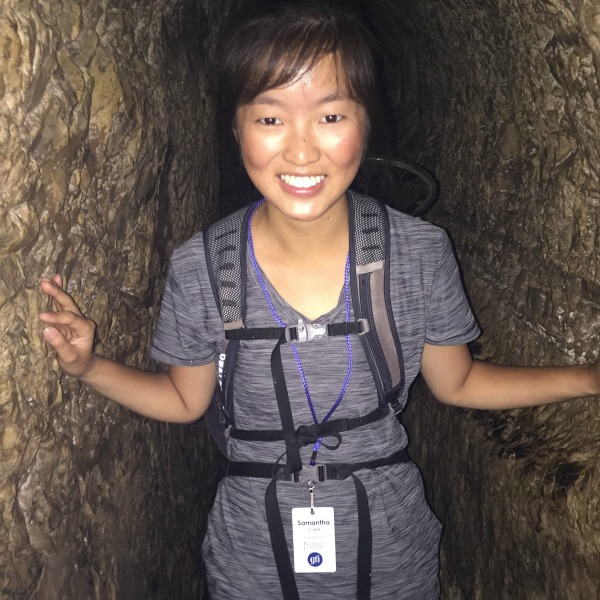 We visited the Southern Steps, which is by the southern edge of the Western Wall. This is believed to be the area where Jesus often taught when he was in Jerusalem. 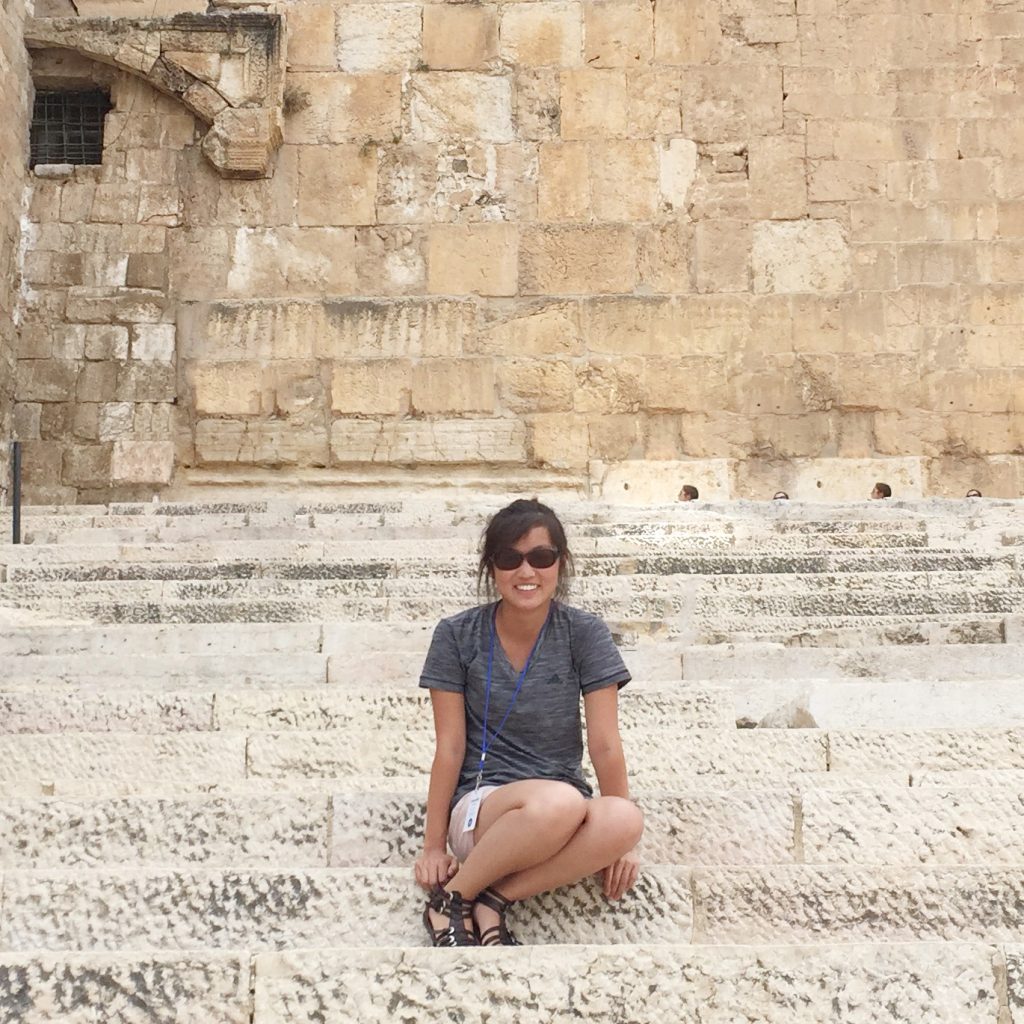 For lunch, we visited Liberty Bell Park. It has a replica of the Liberty Bell, and is dedicated to America! (PS We also passed the new embassy in Jerusalem.) 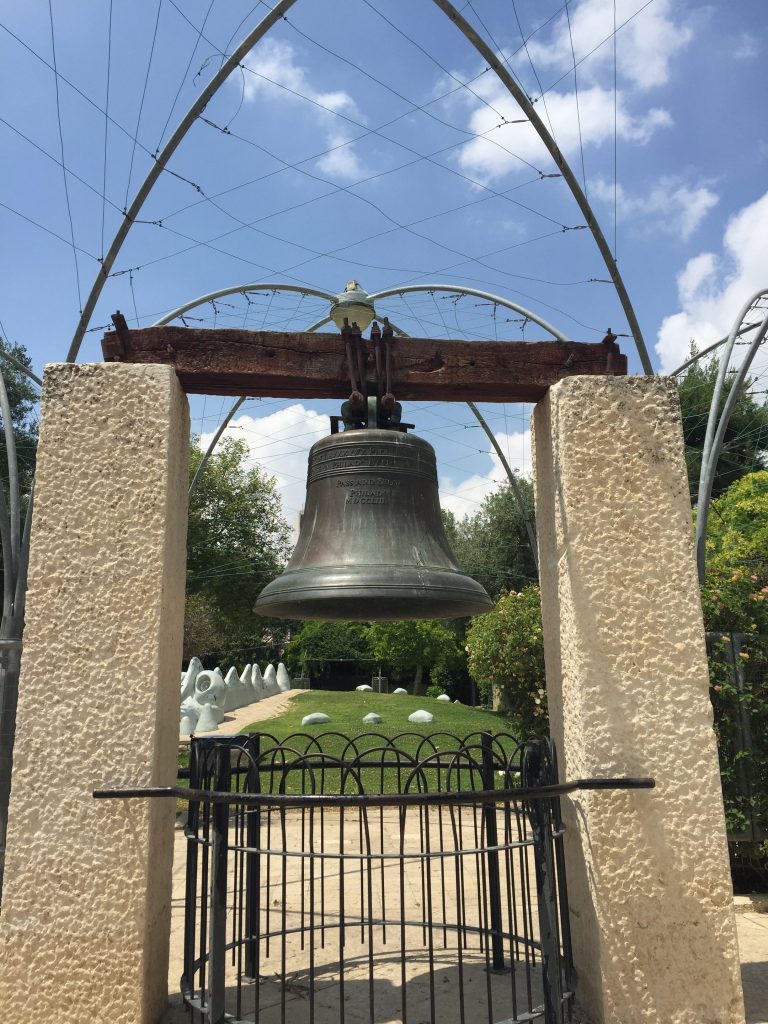 Lastly, we ended with Yad VaShem, Israel’s Holocaust memorial. We weren’t allowed to take pictures inside of the museum and I’ll probably write a whole article about this, but here were some highlights:
The first two pictures are in the Avenue of the Righteous, where trees are planted in honor of the righteous gentiles who rescued Jews during the Holocaust. The top left is of me with Irena Sendler’s tree. Irena rescued 2,500 Jewish children throughout the war, and her bravery and courage inspires me daily. I’ve mentioned her dozens of times on my blog, and was so excited to see her name and memory. (Here are some Holocaust movies, many of which include stories of rescuers.)
Despite being horrifically tragic, the museum ended with a beautiful outlook of new Jerusalem. The museum wasn’t very graphic, but instead wanted to educate future generations on the Holocaust. At the end of a long hour of visiting the museum, it ended with a sign of hope and resilience. 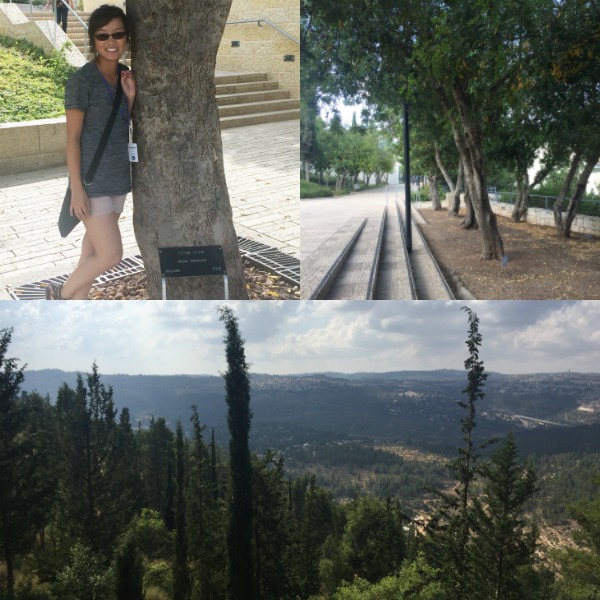 Today focused on many places of Jesus’ life. We visited Via Dolorosa, Gethsemane, Israeli Museum, Mount of Olives, Ramparts, Pool of Bethesda, Farewell Dinner, Saint Anne’s, and the Church of the Holy Sepulchre, where it is presumed Jesus died and was resurrected.
We spent most of the day studying Jerusalem, past and present, as were in awe of some of the places where Jesus walked and hoped for peace and prosperity for Israel. The day went by quickly, and we weren’t able to spend more than an hour at most of the sites. 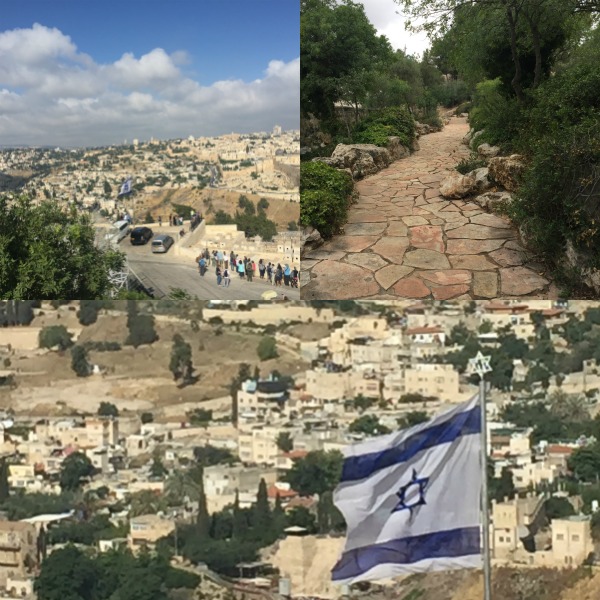 At the Church of the Holy Sepulchre, where it is presumed Jesus died and was resurrected, I was sadly somewhat disappointed in the experience. Both locations are mere feet apart (which fit in with what we learned about ancient burials!) but a church had been built over it, and it was highly and in my opinion overly ornate. It took away from the significance of what Jesus did for us when he sacrificed himself for our sins.
This is a very brief, summarized snapshot of everything I learned and experienced during this trip and in this amazing land! Overall, I had an INCREDIBLE time in Israel and definitely want to go back someday!
I am ridiculously thankful to have been able to experience the Holy Land, learn more about Jewish culture, and gain perspective on the Bible. 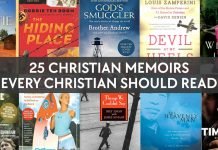 Hanukkah Books and Movies for Kids