Whether your kids have a parent in the military or are interested in America’s military, here are some books about the military, soldiers, and veterans. 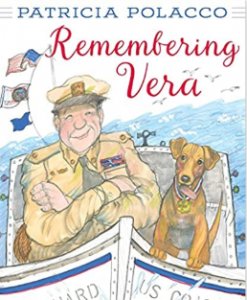 A US Coast Guard patrol saw the mangy stray dog and decided to take her in. They named her Vera, and soon she was a fixture at the San Francisco Coast Guard base. She brought some fun and smiles to those stationed there and later proved a valuable asset in many other ways as well.

An American soldier stationed in the Philippines during WWII finds himself bitten up and miserable with bug bites. When a local child helps to ease the pain of his welts, he befriends her and the two form a bond that unites them despite the language and cultural barriers.

Stars Above Us by Geoffrey Norman

A young girl and her father look for a special way to stay connected with the father’s deployment looming closer. Together, they choose a special star and decide they will each look at it to remind themselves that the other is thinking of them, no matter where they are in the world.

A little boy waits, sometimes with little patience and an abundance of excitement, for the day his daddy will walk through the door.

A Paper Hug by Stephanie Skolmoski

A little boy misses his deployed father and desperately wants him to know that he thinks of him and eagerly awaits his return. He sends his dad a ‘paper hug’ across the ocean in the form of a care package. 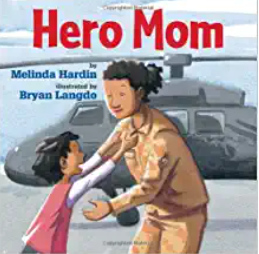 Makes a strong connection between superheroes of comic books and the women who wear combat boots. Kids will understand that moms in the military are everyday heroes they can look up to!

Superheroes fly around the world and sometimes are away for long periods of time, and a similar sacrifice is made by the dads who decide on a career in the military. Military dads are heroes too!

Filled with Navy vocabulary, this book gives a good view of the inside of a ship and lays out the responsibilities of the men and women aboard in a simple and straightforward manner.

Young Natalie misses her father, a soldier deployed in Iraq. She knows that while her father is fighting for his country and family with stalwart courage, she too must hold down the home fort with bravery until he returns. 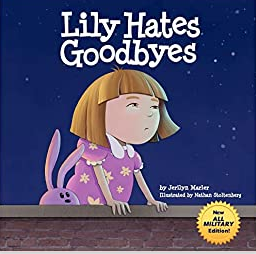 Lily has a really hard time with goodbyes, and she is no stranger to them as she is part of a military family that experiences regular deployments. While Lily doesn’t look forward to saying goodbye, she also learns to have eager anticipation for the reunion that will eventually take place.

The ABCs of the Army by Maria Cordova

A fun way to introduce your little one to army terms and phrases that aren’t common among civilians.

I Miss You!: A Military Kid’s Book About Deployment by Beth Andrews

When one family member is deployed, it is often hard for children to wrap their minds around this big change and what it will mean for them. This book gently addresses the stress and anxiety that children might feel and answers questions they might have about keeping in touch.

My Dad’s a Hero by Rebecca Christiansen

A sweet tribute to the ways that military members contribute to our society in valuable ways. Also includes space at the end for kids to place photos of themselves and their own hero parent.

H is for Honor by Devin Scillian

A military alphabet that celebrates the honor, courage, and determination displayed by our country’s defenders. 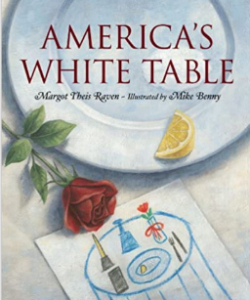 Setting the white table in military dining halls is a common practice, but how did this tradition come to be? This book explains the deep significance behind the empty place settings as a way to honor those who fought but never did made it back to eat.

A young girl named Jenny is feeling anxious about her mother’s upcoming training in Europe. She knows her mom will be far away for some time, and she expresses her fears to her mother. Jenny’s mom reminds her daughter that she is going to be flying tanker jets in order to secure her daughter’s freedom for many years to come.

Lizzie misses her mom who is deployed overseas. She frequently writes and sends letters to help keep her connected to her mom, and their sweet relationship is played out across the pages.

Kids who have experienced the pain of a parent deployed will relate to this emotional tribute to those who must spend time apart in the name of defending our country. In an age-appropriate way, this book articulates the feelings kids might be experiencing when absent from a parent for an extended period of time and offers ways for children to direct those feelings positively.

I Love You Near and Far by Marjorie Blain Parker

When military families move, they uproot their lives in every aspect. Children often experience sadness and loneliness when they realize that they will no longer be near grandparents, cousins, aunts, uncles, and other extended family. This book tenderly deals with these big emotions by spinning a positive outlook that love can cross a great distance. 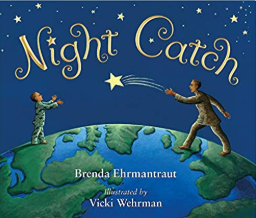 A dad, deployed and separated from his son by an ocean, uses the North Star to play a nightly game of catch with his boy who remains at home.

Shea Leigh misses her daddy, a member of the National Guard stationed far away in Iraq. She wants to send her father a little bit of comfort in the form of a teddy bear named Boo Boo. When Boo Boo arrives in Iraq, he gets the grand tour of the army base and gets to fly in a fighter jet–all while keeping strong the bond between father and daughter across oceans.

Before becoming a renowned baseball star who fought for racial equality, Jackie Robinson served in the United States military. This is an interesting story about a little-known time in Robinson’s life.

A little boy fascinated by airplanes listens to his great-uncle recount his own time in the sky. When WWII came knocking, the Tuskegee Airmen stepped up to do their part with courage and determination. These oft-unsung heroes of WWII are celebrated in this simple, lyrical text. 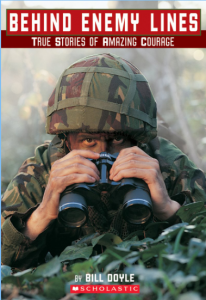 Behind Enemy Lines by Bill Doyle

Aimed at grades 3+ in a similar vein as “I Survived,” this book has several stories of people who have escaped harrowing events from WWI, WWII, the Vietnam War, and more. I really enjoyed this one!

With the memories of WWI still fresh in their minds, the Allies decided to band together to bring an end to WWII as swiftly as possible. Hitler had to be stopped–they were agreed, and the world leaders knew that to win, they would have to raise the bar like never before. Thus began a series of crazy, creative, and cunning strategies like the world had not seen previously: dead bodies dressed like spies washing up on German shorelines, poisoning livestock, hiring and training assassins. A thoroughly engaging account of the tactics used to bring the world back to peace.

For kids grades 5+, this is a great story about a radarman in the British Air Force and his dog Judy, who met as POW during WWII.

Who Were the Tuskegee Airmen? by Sherri L. Smith

This brave crew of African American pilots were significant in the fight to bring an end to WWII. The chapters recount stories of dangerous missions and narrow escapes of these military flyers, while also giving readers a window into the personal lives of several of the men.

Part of the Dog Tags series that tells the stories of soldiers and their faithful canine friends, this installment introduces readers to Gus and his bomb-sniffing dog Loki. The two learn to trust each other and work together as their mission in Afghanistan becomes all the more dangerous. 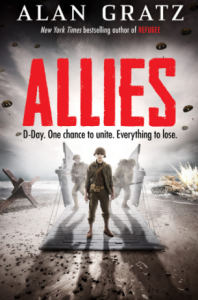 In a show of unity like the world has not seen before or since, troops from the UK, Canada, the United States, and a group of Frenchmen who opposed Hitler’s rule fought for freedom, justice, and equality on the beaches of Normandy on D-Day. But after that day, those same soldiers who fought for equity found themselves at war again, against racist ideals and systems held by the very people they had fought alongside on the beaches. This book tells their stories and reminds us that D-Day proved what unity can accomplish and calls for a return to it as a worldview.

Code Talker: A Novel About the Navajo Marines of World War Two by Joseph Bruchac

During WWII, Navajo code talkers were essential senders and receivers of unbreakable messages that used their native language.  Their efforts were critical in the fight against Japanese forces and their story remained classified until long after the war.

I Pledge Allegiance by Chris Lynch

Four best friends all sign up with the army when one of their crew is drafted, although each of them ends up in a different branch. They keep the protection of the others in the forefront of their minds as they seek to be the best they can be in the position they find themselves in. They all remember the pledge they made to return safely home together. Part one of a five book series.

A white teen and an African American teen are both drafted into WWII. The two boys are about to face a grueling test of their courage and resolve. As the day that would later be known as D-Day dawns, these young soldiers will face danger like never before. They desperately hope they will survive. 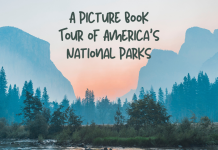