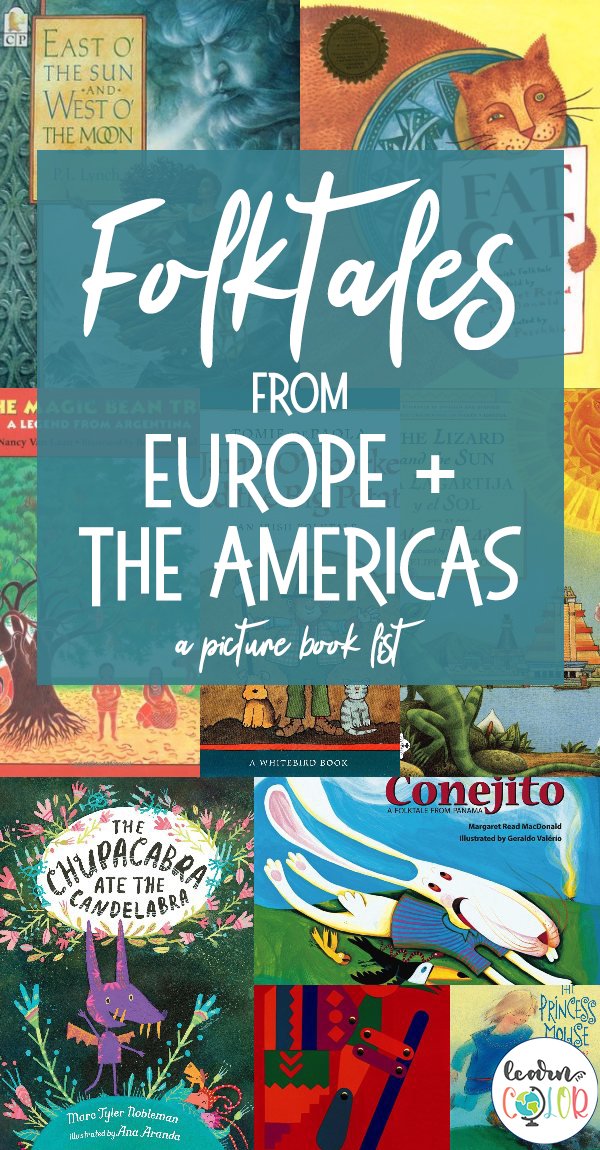 Legends and Folktales From Europe and the Americas

As a child, I loved reading fairy tales and folktales

Legends and folktales from Africa

Three goats expertly evade the trolls trying to eat them up. Using their cunning, they manage to find a way across the bridge controlled by trolls and to the scrumptious green pasture beyond. 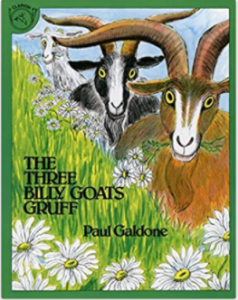 When two brothers come of age, they each cut down a tree. The place it falls will determine the direction they should go in to find their bride. One brother’s tree points to the forest, where he finds a mouse. He brings her back home and is ridiculed by his family until a bit of magic ensues.

This Creole tale set in Louisiana stars two sisters–the lovely Blanche and the mean-spirited Rose. Blanche’s aunty, wishing to reward her tender-hearted niece, gifts her with some talking eggs that contain magic and treasure.

The ducklings that hatched in mother duck’s nest were all sweet, snowy white creatures. One, however, was gray and clumsy and his siblings laughed at him. He eventually grows up into a beautiful, graceful swan.

Enjoy this Swedish spin on “stone soup.” A travel-worn man stops at the home of an old woman to rest his bones for the night. At first, she is hesitant to welcome him in, but he soon charms her into accepting him in and helping him whip up a pot of nail soup, beginning with, what else, a nail.

A nasty troll-bird threatens the village, so Ola shoots it down and all the people get together to enjoy a roast bird feast. However, two trolls discover what happened and determine to get revenge.

Tim O’Toole and the Wee Folk by Gerald McDermott (Ireland)

Tim, a bit of an outcast, finally stumbles on some luck when he receives a magic gift. In an effort to finally be accepted, however, Tim loses the gift in a tricky tr

ade. A group of leprechauns band together to help Tim recover his present. 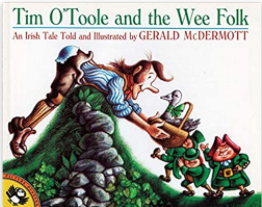 The Tomten by Astrid Lindgren (Sweden)

The Tomten, a kindly troll-like creature, lovingly cares for the animals in an old barn while the winter snow falls softly outside.

Half a Kingdom by Ann McGovern (Iceland)

A band of trolls kidnaps! A poor peasant girl must use her ingenuity to save him in this Icelandic folktale.

Fin the giant gets winds that the fiercest giant in the land is on his way to challenge him in a fight! Full of fear, Fin and his wife concoct a clever plan to defeat the giant bully.

Three goats live in fear of the chupacabra, knowing the fuzzy creature is out to eat them. One day, they decide enough is enough and set out to scare their nemesis with a candleabra–with hilarious results.

Blanzeflor, a beautiful and kind girl, is forced to marry a cruel king. He gifts his new bride a necklace that he warns her never to remove from her neck. Seeing the poverty of the townspeople around her, Blanzeflor disobeys and begins to remove one pearl at a time and giving them away. When the king discovers what she is doing he becomes furious and a flock of birds descends from the clouds to rescue her. A “meow, meow fat! hungry, hungry cat!” goes around eating everything in sight from soldiers to a mouse, to an elephant. He grows and grows until he is humongous and would have kept growing if the mouse hadn’t snipped his stomach open, let everyone free, and sewed him back up. Now he’s “meow, meow flat! empty, empty cat!” (here’s another version of the story)

Jamie is very lazy and relies on his wife to do all of the work. But one day while the hardworking woman is busy doing all the chores, her back goes out. Jamie begins to prepare for his funeral as he is sure he will die from lack of food. A fairy he meets along the way gives him a gift, a mysterious potato seed. When Jamie plants it, everyone is in for a surprise, most of all Jamie.

An anthology of Irish folktales with beautiful watercolor illustrations.

A porquois tale about why moles choose to live alone in tunnels underground.

A little girl sacrifices herself to save her family by going North to live with a polar bear, who is actually a bewitched prince. Unknowingly, the girl puts a spell on the bear that binds him to the trolls, and she must travel east of the sun and west of the moon to a faraway land in order to rescue him. 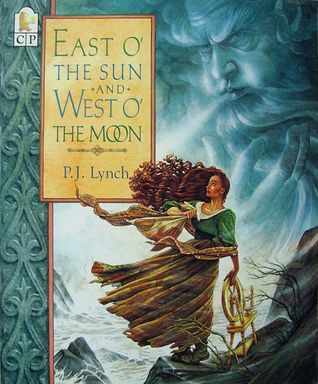 The Lizard and the Sun by Alma Flor Ada (Mexico)

A porquois tale that explains why lizards like to lay out in the sun.

A collection of Celtic mythology and folktales written for younger readers. 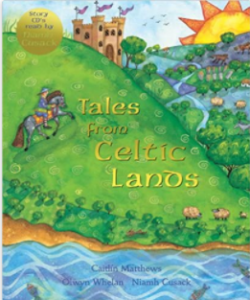 While out walking one day, Halva finds a polar bear cub and brings it back to her home. Sister Bear proves to be helpful to the family by helping to supply food in the cold winter months, and makes everyone laugh by dancing to Halva’s flute. One night, the two are on a journey and stop to rest at a home terrorized by trolls. Sister Bear and Halva combine their wits to rid the house of its unwelcome inhabitants.

Conejito is heading to his aunt’s house to eat dessert. Along the way, he must evade the jaws of a lion, fox, and tiger who would all like some dessert of their own.

In this hilarious trickster tale, a guinea pig named Cuy tries to avoid getting eaten by telling a hungry fox that the sky is falling and they must hide.

A trickster tale about a crafty tortoise named Jabuti who often plays jokes on his fellow animals. A vulture, tired of putting up with the tricks, decides to teach him a lesson. 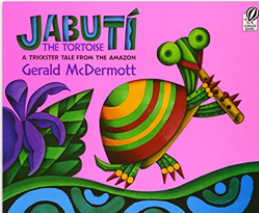 In this bilingual folktale, the beautiful cuckoo must put her pride to the side in order to save her friends from a fire, reinforcing the idea that inner beauty is of greater importance than outer vanity.

Mariana and the Merchild by Caroline Pitcher (Chile)

An old woman named Mariana lives out her lonely days by the sea. She longs for companionship but the children of the village are afraid of her and tease her. One day, Mariana opens up a shell and inside she finds a mer-child. Mariana lovingly cares for the girl until her mother returns to fetch her. After watching Mariana with her charge, the village children are no longer afraid of the old woman and embrace her.

There is a widespread drought in the land because the Great Bird is blocking the people’s prayers for rain. Topec is just a boy, but he decides that he will work to scare away the bird and bring rain to the thirsty ground. After he is successful, the magic tree gifts the people with an abundance of beans.

Martina and the Beautiful Cockroach by Carmen Agra Deedy (Cuba)

Marina, a grown cockroach now at 21 days old, is ready to test her suitors and make a decision about who to marry. At the wise advice of her grandmother, she spills coffee on each of their shoes to see if they react in anger. Each of them fail the test and leave. In the end, only a gentle mouse remains. 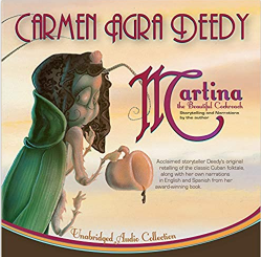 DK Eyewitness Medieval Life offers an in-depth look at life during that era. It covers several different perspectives from both the town and the country and for the peasants and the aristocracy of the era.

Want to extend learning even more? Check out this Europe Unit Study! This comprehensive, 240-page unit study goes in-depth to the culture, languages, geography, history, landmarks, and tourism of five different European countries: England, Germany, France, Italy, and Russia. Each of the five unit studies included are highly interactive and contain book, movie, person, and topic resource lists so your students can learn through several different forms of media. All five studies also have 8-9 different subjects, allowing students to explore the country through its music, art, animals, geography, and more! To tap into students’ artsy side, the interactive notebooks provide a creative way to learn some fast facts about the country. STEM projects engage students who love to learn in a hands-on and memorable way. This unit study also includes two picture book study guides and some cheat sheets to help students remember things about the country. As a bonus, 10 pages of guided research sheets are also included. Your students are sure to enjoy the Europe Unit Study. Check it out on the Learn in Color shop and use code LOVETOLEARN for 20% off.