Discover more about places around the world with these fairy tales, folktales, and legends picture books set in Africa.

Legends and Folktales From Africa

Why the Sky is Far Away by Mary-Joan Gerson (Nigeria)

Legend has it that when the Earth was young, people could take whatever they needed from the sky. But soon, many people grew greedy and took more than they could use, frustrating the generous sky who decided to draw up and far away from prying hands. 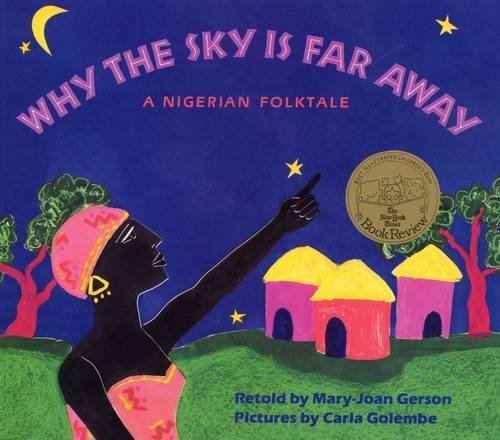 A Story, A Story by Gail E. Haley

Ananse, the Spider-man, wants to gain access to the stories that the Sky god holds. The Sky god sends him on a wild goose chase, not believing that he will really be able to complete the challenge given and fulfill the tasks. Only when it is too late the Sky god realizes that Ananse may have a few tricks up his sleeve.

Water is sad because he never gets invited to spend time at Sun’s house. Sun says that the reason water cannot come to visit is because his house is too small, so he builds a larger one. After completing the new house, he invites his friend over. But when water comes over to visit, he fills the whole space, leaving no room for Sun or Moon. The three realize they will not be able build a home big enough for all of them, so they try to find a new place to live. Can you imagine where they ended up?

One leg goes one direction. An arm flails over here. Head bounces around on the ground searching for the others. To be complete, each of the parts need each other, but how will they work together?

A mosquito lies to a lizard…and so begins a chain reaction of events leading to catastrophe after catastrophe. A pourquoi tale from West Africa that explains the reason why mosquitoes buzz in people’s ears today. 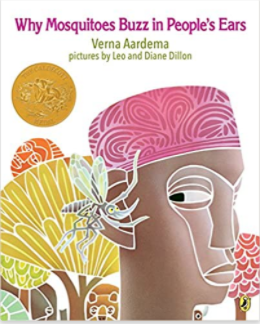 Anansi the Spider is on a long and harrowing journey. Fish and Falcon both try to stop him by harming him, but luckily Anansi is saved by his brave sons. However, he can only honor one son for their heroic acts. He must decide which one to reward and calls on the god Nyame to help him decide.

Bringing the Rain to Kapiti Plain by Verna Aardema (Kenya)

When the Kapiti Plain suffered a serious drought, Ki-pit brought the rain back to the land. Set to the rhythm of the nursery rhyme “The House that Jack Built”.

Rabbit’s house has been broken into by someone, or something, and Rabbit gathers his friends to help rid his home of the invader. This story is written in a very unique style in that it is a play within a play.

The Hatseller and the Monkeys by Baba Wague Diakite (Mali)

A hatseller walks around all day long with the caps balanced atop his head, attempting to sell his wares. One afternoon, he grows sleepy and decides to take a rest by a tree. When he wakes up, the tree full of monkeys above him have covered heads while his own is bare. 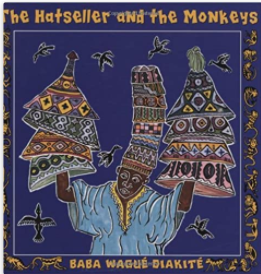 The King thinks he is the smartest and cleverest in the land. But when he discovers that there is a girl named Sense Pass King whose wits surpass his own, the king is extremely angry. He calls for a showdown of sorts. The winner will determine the fate of the kingdom.

In this African Cinderella, Mufaro has two lovely daughters, and the King has noticed them. To discover their true character, the King goes undercover and realizes his first impressions might have been wrong.

A gray ringdove calls together all the birds of the area one afternoon to ask them who has the most beauty. Unanimously, blackbird is voted as the one with the most attractive features. At the other birds’ request, blackbird agrees to paint dark markings on them, but reminds them that their color isn’t what will make them beautiful or not. The message about the importance of inner beauty is clear.

A young mouse brags about being the strongest animal in all of the land. His grandfather rebukes his grandson’s cocky attitude and tells him of a very large, extremely strong creature called the elephant. The arrogant mouse does not believe that anyone could be stronger than he, so he sets off in search of this elephant to prove his strength against her.

To please the Sun-god, Zomo the trickster rabbit must accomplish a series of tasks. He does this successfully using his craftiness, but in the end finds out the real joke has been played on him. 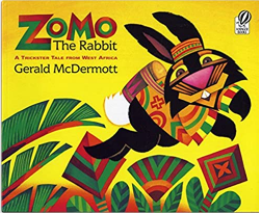 The Name of the Tree by Celia Barker Lottridge (Central Africa)

The land has been bone dry for a long time and desperately in need of rain. The animals have eaten all the grass they could find, and all that’s left to eat is the fruit of a very tall tree. To get to the fruit, the animals have to figure out the name of the tree. Problem is, the lion is the only one who knows the name and he isn’t giving it up easily.

Koi and the Kola Nuts by Verna Aardema (Liberia)

When Chief Ogumefu’s youngest child, Koi, is told that his only inheritance will be a small and unsightly kola tree, he is incensed. Koi decides that his measly inheritance offers him no reason to want to remain at home, so the young boy sets off on a journey of the world with only a bag of kola nuts for company. He hopes to run across some treasure or a way to make money, but instead learns an important lesson: doing good is a wonderful inheritance to have.