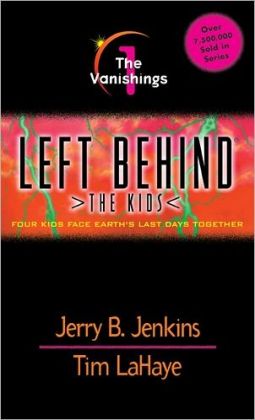 Left Behind is the bestselling series of 16 books by Jerry B. Jenkins and Tim LaHaye dealing with the end times, the Rapture, tribulation. What few do not know is there is also a series for teens and preteens, “The Kids” version. (I would not recommend this series for kids under 10, simply due to the intense nature of the series. There is nothing offensive, except obviously very-real violence.) This series of 40 books deal with exactly what the adult series did, except from the point of view of teenagers. Each book is about 150 pages, and each ending flows right into the next book with non-stop action.
—
Judd Thompson Jr. – The Runaway. Typical 16 year-old Judd is sick and tired of everything his mom asks him to do. The simplest tasks will set off a debate. After a credit card company mistakenly puts Judd Jr’s name on Judd Sr.’s (Judd’s father) credit card, Judd realizes he can spend thousands of dollars on this little card. Angry at his parents for bossing him around and for making him go to church, Judd runs away – both from his family, and symbolically, Jesus. As a child, he had never actually accepted Christ into his heart, but he had memorized tons of verses and stories. By himself on a plane to London (with Hattie and Rayford Steele from the adult Left Behind series), he begins smirking about how grown up he is and how “this will show them.”
Vicki Byrne – The Rebel. 14 year old redhead Vicki was the rocker type – short clothes, leather, jewelry and heavy makeup, tough. Growing up in a trailer park, followed by the constant “trailer trash” stereotype – Vicki felt the need to be rough and tough. Two years ago, her party-parents had a drastic change in their lives – they accepted Christ – and she wanted nothing to do with it.
Lionel Washington – The Liar. 13 year old African-American Lionel is growing up in a rich part of town, causing ridicule from his cousins who claim he’s “rich” and “white” now. Lionel loves his parents, but he, and his uncle, have a secret; despite the family church history, he and his uncle are not Christians. Lionel is in no way proud of his secret, and unlike Judd, feels horribly guilty.
Ryan Daley – The Skeptic. Best friend of Raymie Steele, 12 year old Ryan was my favorite character of Left Behind: The Kids series. (until Conrad came into view around book 12) He is the only one who had never grown up in a Christian household.
—
Then the Rapture happens. Reading the Rapture, specifically from the view of Judd, gives me chills. I could not imagine something so horrific as realizing you’ve been left behind – especially if you grew up in a strong Christian household, and every single person close to you was raptured. Judd, Vicki, and Lionel’s whole family (and most of their friends) were raptured. Ryan’s parents both die in the midst of the chaos.
There is really nothing more to the book than their pre-rapture lives, the Rapture, and the immediate aftermath, most of the action starts in future novels. Being a short book, I would HIGHLY recommend buying/loaning at least 5 books of the series at once.
The writing is nothing really unique (throughout the whole series), even a little too bland and simple, but I didn’t really mind this due to the fantastic storyline. Background plots (and characters) are from the adult Left Behind series, so it would be interesting for an adult and teen to read them simultaneously. (For a list of synopsis and their adult-book pairings, see here.)
I read all the books up until about 35-ish. My library didn’t have 2 of the books, and this isn’t really a series where you want to skip a book, although each book does catch you up with what previously happened. When I finally figured out how to transfer books, months had passed and my memory was fuzzy exactly which book I last read. Now, rereading The Vanishings makes me want to reread the series again and see how it ends! But, I won’t be able to reread the series without reading the whole series again…so…
Warning: You will not be able to put them down.
ALSO: A remake of the adult Left Behind movies is coming out this year!