Welcome to Inspirational Tuesday! A while ago on Facebook, I posted the story of Chiune Sugihara, a Japanese diplomat who saved 6,000+ Jews during the Holocaust. Many of you commented you had never heard of him, and it got me thinking: You know the Adam Lanza’s, the evil people of the world. Yet often, for some weird reason, the good people often go overlooked. Every Tuesday, I decided to balance it out by showcasing a courageous and inspiring person. Feel free to comment your requests. 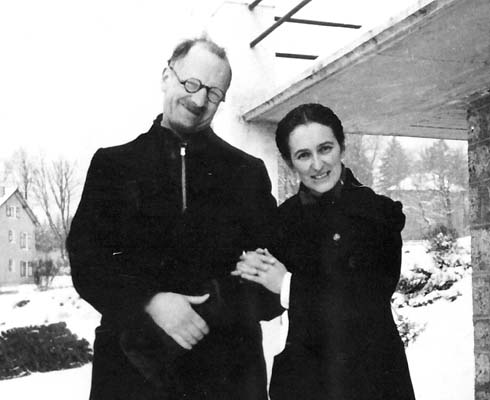 I can’t remember how I first heard about the Trocme’s and Le Chambon, but they remain one of my favorite stories from WWII. This week is close to the anniversary of the Vel d’Hiv roundup in Vichy (pro-Nazi), France during WWII. On July 16 and 17 in 1942, 14,000 Jews were arrested, and the majority died in concentration camps. The Vel d’Hiv was what inspired an entire village of 3,000 to resist the Nazis.
Le Chambon was a small Protestant village in the mountains of Catholic France. Andre Trocme and his wife, Protestant pacifists, moved there after WWI and served as a pastor for about 15 years. After the Vel d’Hiv roundup, they felt an increasing urge to help Jews, and made it their mission to help any Jew who came to their door. Andre began urging his congregation to follow, and soon many were volunteering to hide Jews in their home.

What started with a refugee woman knocking on their door pleading for help during a cold evening, turned into a mass-operation the entire village of Le Chambon took part in.
The citizens helped Jewish refugees by feeding and clothing them, forging documents, forging ration cards, providing temporary shelter, or permanently hiding them for the remainder of the war. Jews were housed in homes or public buildings throughout the village, and the children were even given an education. When the Germans would come to raid their village, the Jews would find shelter in the wooded hills nearby. After the Germans left, members of the village would come into the woods, sing a little song, and the Jews would know it was safe to come out.
In early 1943, the Gestapo began cracking down hard; and ordered Andre to submit a copy of the names of Jews in Le Chambon. Andre refused, and was later arrested. Although he was soon released, he went into hiding in the village, but still remained in charge to keep the village running smoothly. His cousin Daniel Trocme, who was working at a school, could have easily fled when the Nazis invaded the school in search of Jewish children. Instead, he chose to stay with the children and was one of the few in the village that were arrested and later executed.
The entire village of Le Chambon rescued about 3,500-5,000 Jews total. Any one of the members could have snitched; whether it be a child accidentally, or an adult maliciously for a hefty reward from the Germans. The big question: Why did they do it? Andre’s response to this question was simple: “These people came here for help and for shelter. I am their shepherd. A shepherd does not forsake his flock. I do not know what a Jew is. I know only human beings.” Being a Protestant village, they felt they sympathized with the Jewish persecution, as Le Chambon was historically somewhat of a refuge for Protestants in a strongly Catholic nation.
The Trocmes and the entire village have been recognized by Yad Vashem as Righteous among the Nations. (A gentile who rescued Jews during WWII.) In the gardens of Yad Vashem, a tree was planted in honor of Andre and Magda Trocme, and another in honor of Daniel Trocme. A small garden and plaque were dedicated to the people of Le Chambon. The only other village to be honored as Righteous Among the Nations was Nieuwlande, a Dutch village with about 117 members.
For more about the Trocme’s and Le Chambon:

“Nobody asked who was Jewish and who was not. Nobody asked where you were from. Nobody asked who your father was or if you could pay. They just accepted each of us, taking us in with warmth, sheltering children, often without their parents—children who cried in the night from nightmares.”