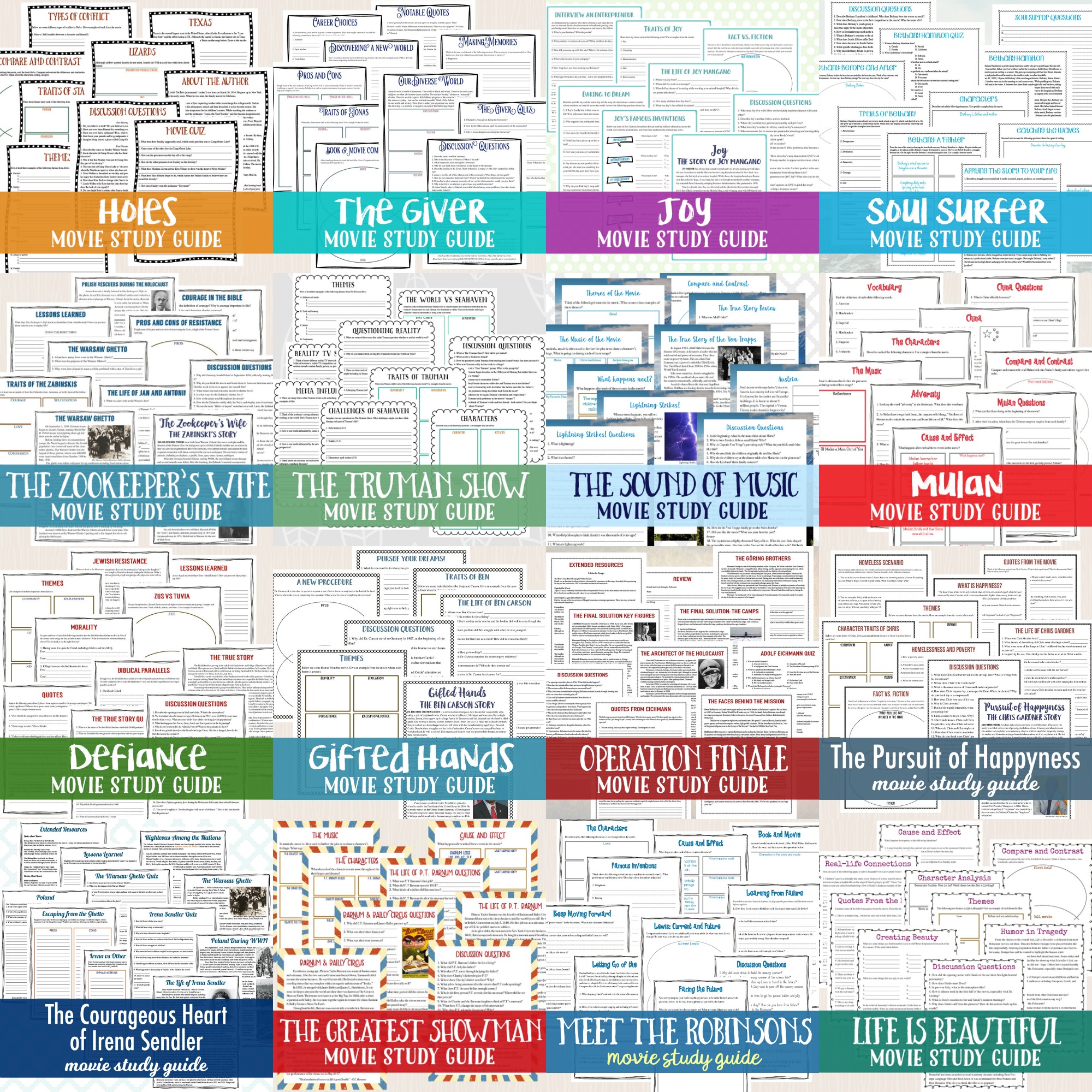 You can also find all movie studies on Teachers Pay Teachers!

Barry is a bee who recently graduated from college. After venturing into the human world, he learns humans use bees for honey and he is determined to do something about it! This cute movie is a great reminder of knowing when to stand up for what you believe in, and also confessing when you make a mistake.

Irena Sendler rescued 2,500 Jewish children during the Holocaust. This Hallmark Hall of Fame film shares her story of courage and rescue in the midst of the darkest of times. It is not graphic and can serve as a great introduction to the Holocaust.

Based on the biography, Defiance tells the story of the Bielski brothers. During the Holocaust, this courageous band of brothers helped shelter over 1,000 Jews in their forest hideaway. It brings to light Jewish resistance during the Holocaust, which is often a neglected topic.

Kuzco is a spoiled king who is turned into a llama! This fun family flick teaches great lessons on friendship and caring, plus learn a bit about llamas and the Incas.

Fiddler on the Roof (G)

Traditions! In this musical, Tevye is a poor Jewish milkman with five daughters. He must balance the old traditions of his village with the new times in this great movie about conflicting values and changing lives.

Swim the East Australian Current and follow along as Marlin, a clown fish, goes on a desperate search for his only son. The Pixar movie is breathtaking and beautifully made. It leaves room for so much discussion on ocean life.

Ben Carson beat many statistics as a child including poverty and growing up to a single mother. He later became the first neurosurgeon to successfully separate conjoined twins.

Jonas lives in a seemingly perfect world without pain, suffering, or heartbreak. However, it comes at a cost. His world is devoid of color, happiness, or love. This thought-provoking movie is based on the Newbery award winning novel and makes us wonder if a perfect world would be as perfect as it appears.

The Greatest Showman is a musical filled with so many great lessons on perseverance and learning from failure. Use it as an opportunity to learn more about the real Barnum and Bailey Circus!

Stanley Yelnats is wrongly convicted of stealing a pair of shoes. For his punishment, he is sent to Camp Green Lake, where he must dig one hole every day. But why? Based on the Newbery award winning novel, Holes is an incredible story with adventure that can be appreciated by every age. It also has valuable lessons on racism and justice.

How to Train Your Dragon (PG)

Learn about vikings and dragons with Hiccup and Toothless!

Joy Mangano is currently a millionaire with several bestselling products, but her rise to fame wasn’t always easy. This movie is loosely inspired by her life but the heart of it remains true: through Joy’s determination, hard work, and grit, Joy has succeeded through life’s frustrating lows.

Life is Beautiful is a poignant film and in my top 3 favorite films. The first half is a romantic comedy, where bookstore owner Guido tries to win the heart of his lover. The second half is set in a concentration camp, where Guido uses his same wit and humor to save the life of his son. This film has SO many good lessons and themes worth exploring for those 12+!

This film was nominated for several Academy Awards and won a few, including Best Foreign Language and Best Actor. I’ve seen the film several times in English and in Italian with English subtitles, and I enjoy the Italian much better!

Keep moving forward with Meet the Robinsons, a family-friendly animated movie with themes of perseverance and creativity! Lewis is an orphan who is set on inventing a time machine so he can go back and see his mom. After a silly turn of events, Lewis learns the importance of letting go of the past and “keep moving forward.”

Mulan is one of my favorite Disney classics! Inspired by the ancient Chinese legend, Mulan bravely takes her father’s place in the Chinese army and eventually saves China from the invading Huns. This kid-friendly flick is filled with great themes and Mulan serves as a great role model.

Enter the world of Narnia through these 50 pages of comprehension and analysis. I also have each movie available to purchase separately.

Inspired by the 1899 Newsboys strike, Newsies is a musical tackling courage, child labor, and injustice. The child-led strike was against an unfair price hike. Although the strike was only a partial success, there’s many lessons we can glean from the Newsies story.

Night at the Museum (PG)

Night at the Museum 1 and 2 is one of my favorite examples of a silly, fictional movie that can teach history in a fun and memorable way!

The Prince of Egypt (PG)

The Prince of Egypt tells the biblical story of Moses through rich characters and a beautiful soundtrack. Although it has some scary scenes, this is overall a positive choice and a great retelling of the Exodus. It serves as a springboard for comparing and contrasting this classic film with the original story from the Bible.

The Pursuit of Happyness (PG-13)

Chris Gardner has a literal rags to riches story, as he battles homelessness with his young son in this true story. Today, Gardner is a multi-millionaire. This is the powerful story of a father’s love, hope, and perseverance.

Secondhand Lions is a coming-of-age film about a shy young boy sent to live with his eccentric uncles over a summer. It’s rumored that his uncles have millions stashed away. Is there actually money – and if so, where did they get it? This film is filled with great lessons and is a positive choice for a family movie night!

The Sound of Music (G)

In this Academy Award winning musical, a young nun is sent to become a governess to seven children. This family film is filled with many sweet, valuable lessons and can serve as an introduction to pre-WWII Austria.

Bethany Hamilton was 13 years-old when she lost her left arm in a vicious shark attack. Through faith, hope, and determination, Bethany went on to become a national champion surfer. This is her incredible and inspiring story!

In this science fiction film, Truman is a carefree man who slowly begins to discover everything about his world isn’t real. He is actually the star of a hit reality tv show which films 24/7 in a built set. Examine society’s addiction and love of reality tv and the effects of its stars!

This fictional animated movie tells the true stories of the homing pigeons who helped deliver messages during WWII!

Jan and Antonina Zabinski were the owners of the Warsaw Zoo in Poland. During WWII, the couple helped shelter hundreds of Jews and resistance members. This is their story of courage and bravery.

You can also find all movie studies on Teachers Pay Teachers! 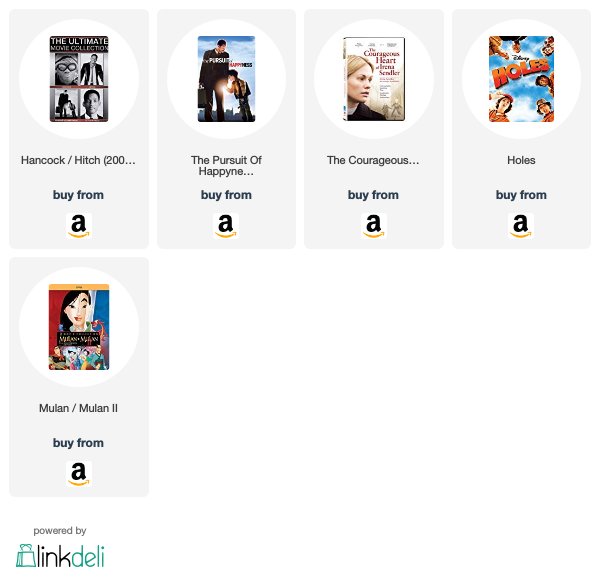