Teach your kids about major events in history with these historical fiction picture books with animals, including books about American history and Europe.

Rescue and Jessica by Jessica Kensky

Jessica’s life changes forever when an accident takes her legs and many of her abilities. She is given a black lab puppy called Rescue, who wonders if he will have what it takes to make a difference for the sullen girl. Together, the two form a friendship that teaches them to lean on the other when they aren’t sure they can believe in themselves.

Sgt. Reckless, a Korean War hero, was enlisted to assist soldiers in the dangerous job of carrying heavy weapons across long distances. Her bravery likely saved countless lives, and today she is honored as a Marine hero. 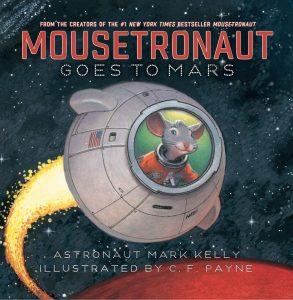 Mark Kelly boarded the space shuttle Endeavor in 2001, along with a few mouse friends he had made along the way. Here Mark imagines the story of a mouse who grew up dreaming of making his inaugural trip into space and becomes the hero of the day.

Alligators in the bathtub? Tigers in the Oval office? Learn all about the weird, wacky, and wonderful pets loved by presidents and their families through the years.

Seabiscuit was far from a winner when Charles Howard bought this racehorse with a losing streak. With some extra practice and a lot of love, Seabiscuit began to rise to fame, eventually earning him the opportunity to race against Triple Crown winner War Admiral.

The Incredible Life of Balto by Meghan McCarthy

In 1925, a fierce blizzard swept across the Alaskan wilderness, and Balto bravely led his dogsled team through the snow to the town of Nome, bringing much-needed medicine and supplies. He became famous after his heroic act, and a statue in honor of him was placed in Central Park.

Dr. Francine Patterson, the patient woman who taught Koko the gorilla how to communicate using American Sign Language, writes here about Koko’s pet kitten, All Ball, and the unique bond shared by the two animals. 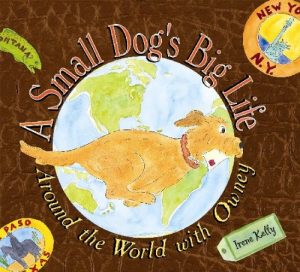 A stray dog named Owney waltzed into the hearts of many when he decided that a New York post office was going to be his new home. He began to journey with parcels of mail all over the United States, and then the world, capturing the attention of people everywhere. In total, this small canine traveled the continents for almost ten years before finally retiring.

Ivan: The Remarkable True Story of the Shopping Mall Gorilla by Katherine Applegate

A shopping mall owner in Washington state thought he knew just what was needed to keep people coming to his stores: a larger-than-life animal attraction like Ivan the Gorilla. Soon, well-meaning visitors expressed concern for the welfare of a gorilla being forced to live inside of a shopping center, and he was moved to a more appropriate habitat at Zoo Atlanta. Contains photographs and fun facts of the real Ivan.

When her owner signs up to fight in the Civil War, “that dadblamed cow” follows him. She never leaves his side, even though she is usually extremely particular and enjoys having things a certain way. She becomes an unofficial mascot for her battalion, bringing some joy to the endless days at war. Based on a true story.

Rags: Hero Dog of World War I by Margot Raven

American soldier James Donovan tripped over a pile of rags in a Paris alleyway, only to find that the pile of rags was in fact a dog who needed lots of love and a little soap. Rags became a much-loved part of the unit, bringing smiles wherever he went. When both Donovan and Rags sustained extensive injuries, army doctors told Donovan that they were going to send him home, but Rags was not willing to leave the side of the man who had rescued him.

A stray dog wandering the streets of Russia became one of history’s first animals to enter into space. Her solo mission played a vital role in helping humans understand how traveling in space worked and paved the way for successful human orbits beyond Earth.

Dogs in Space by Vix Southgate

Belka and Strelka went from street dogs to space dogs in 1960 when they were chosen to orbit the planet in one of Russia’s most important space missions. The two canines became the first to enter space and successfully and safely return to earth, becoming key players in the quest to get humans into outer space. 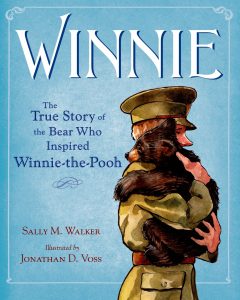 Winnie: The True Story of the Bear Who Inspired Winnie-the-Pooh by Sally Walker

Harry Coleburn’s beloved bear cub, brought with him from Canada when he traveled to England to train for the fighting in WWI, was too big to be carried to the battlefield in France. Coleburn wasn’t sure what would become of his pet Winnie when he left him at the London Zoo. Luckily, Winnie wasn’t alone for long, as a boy named Christopher Robin became a regular visitor inside the enclosure, playing with the bear as if he had known him for a lifetime.

A Canadian soldier en route to England to prepare for battle saw a small black bear cub at a train station and decided to take him all the way to Europe. He called the bear Winnipeg, in honor of his hometown, and the bear stayed with him until the soldier had to head to the front in France. Winnie’s new home became the London Zoo, where Christopher Robin and his father, A. A. Milne, visited and began to dream about all the adventures the bear might have had.

The Cats in Krasinski Square by Karen Hesse

Two sisters living in Warsaw, Poland know that the people stuck in the Ghetto on the other side of the wall are in desperate need of food and supplies. They notice the cats slipping in and out of secret holes and hideaways near the wall, and the girls determine that food could also be passed through these passageways to the hungry hands beyond. When the Gestapo attempts to overthrow their plan, the girls thrust the cats in the direction of the Gestapo dogs, and a wild chase begins that removes the attention from the girls, allowing them to smuggle much-needed supplies to the people waiting on the other side of the wall.

A kind soldier named Robert Conroy takes in a stray dog, who he lovingly dubs ‘Stubby’. Stubby never leaves his master’s side, even following him into battle as WWI rages around them. The brave dog becomes a warrior and friend to many fighting in the trenches. Grab the book guide here.

Based on the amazing true story of a pigeon who saved a group of soldiers. An American battalion fighting in WWI used several trained carrier pigeons to help relay messages back and forth. When the soldiers become lost, they realize Cher Ami is their last hope of survival. They send the pigeon with a message, and pray that the brave bird can make the journey.

In the 1800s, a railway inspector lost both of his legs in an accident and feared that the tragedy would also mean the end of his livelihood. But Jim had an idea that might save his job–he trained Jack, a clever baboon, to help him do all of the things he couldn’t do with only one leg.

Animal lovers will be delighted with these fast-paced series that tell about significant points in history–through the eyes of animals!

White Star: A Dog on the Titanic by Marty Crisp

Sam Harris offers to care for the dogs on board the ‘Unsinkable Titanic’, and he befriends several, especially the captain’s beloved Irish Setter. When the great boat hits an iceberg, Sam and Star find themselves in danger and must band together to survive.

Brind and Glaive, Sir Edmund’s hunting dogs, take their duty to protect the family very seriously. But when the Black Death strikes too close to home, the dogs find themselves on the run with Sir Edmund’s daughter. Suddenly, the great hunting dogs have become the hunted, and they must work to keep their young charge safe against the unseen enemy: the plague that seems to follow them wherever they go.

WWII has ended, but Russian teen Mikhail knows that his neighbors won’t like it if they find out he is harboring a German shepherd. Since the dogs are associated with the enemies of his country, Mikhail knows it won’t be easy to keep Zasha safe.

A farm horse named Joey is sold to be used as an army steed, and Albert, his boy, is devastated. Joey proves very useful to his unit–helping to carry heavy equipment, transporting hurt soldiers, and going straight into battle without fear, but all the while he is wondering about Albert, the boy he left behind on the farm. Albert, too, is watching and waiting for his best friend to come home.