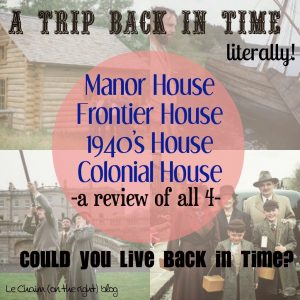 No electricity. No washer. No dryer. No fast food. No internet. No toilet paper. One shower (if that) a week. For 9 weeks. For 5 months. For 3 months. For an awfully long time.
About a decade ago, PBS had a series called “House” and they offered many families a chance to go back in time – literally. Settings included the Victorian Era, WWII England, The New World (Early America), and the Frontier in the late 1800s. The experience was made as realistic as possible – from the clothes, the house, the setting, the food, the appliances, the mannerism, and the work. Before going full-into the time period, all participants were given pre-time period information so they could really learn about the time period before experiencing it themselves, thus being better prepared for the show instead of having major culture shock.
Although many of the participants thought it was all just fun and games in the beginning, it turned out about a 90:10 work to play ratio. What was really interesting is that despite lots of hard work and once-a-week-baths, the majority of the participants didn’t want to leave afterwards. Each gained something of value from the show; they learned life lessons and character, found themselves stronger as a person, felt less-entitled, and many families grew closer.

The show received thousands of applicants and looked for those who showed true interest in the time period, instead of just applying for “adventure” or a challenge. Many of the participants had ancestors who had lived during the time period, so that was why they were interested. Others just loved the time period and wanted to experience it firsthand. Each set was made as realistic as possible with lots of research put into it – and they did a pretty darn good job recreating life in different time periods in history. 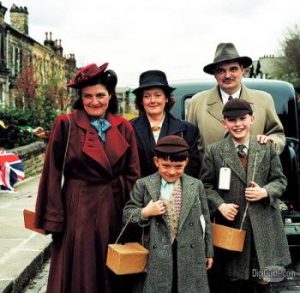 1940s HOUSE – 1939-1945 – highly recommend! a must watch!
As a major WWII buff, this was my favorite and greatly encouraged me to pursue WWII frugality. (even more than I was already doing) The three-generation Hymer family that participated were amazing. I was a bit scared at how they would do at first when the family sold their rabbits (a main food source during the war) but after that, they really did a great job. Participants were a couple (Michael and Lyn), their divorced daughter Kirsti, and her seven and 10-year-old sons Ben and Thomas. The participants – even the little ones – were amazing and really tried hard to recreate the experience – despite it being tough at times. The family built an air raid shelter, lived on rations, and they even had a local grocer who recreated a part of his store 1940s style!After the war experience, Lyn said she got so used to walking everywhere she rarely used her car. Instead of going to the grocery store like she used to in the 21st century, she continued to go to the baker for bread, butcher for meat, etc. like in the 1940s. Her “post-war” life including cutting her pre-war grocery bill 50%, since they had grown accustomed to rations and just living on less and making do.100% family friendly.
MANOR HOUSE – 1900 – highly recommend
This one was my sister’s favorite – and I loved it. The entire cast was fabulous and had a great attitude about their less-than-fun roles. Everyone had a role and status in this one, which made it very interesting! While one girl gets stuck as the scullery maid (the lowest servant), the Olliff-Cooper’s are living a lush life with an entire staff at the snap of their fingers. The Olliff-Cooper’s didn’t have it all easy either – can you imagine having to walk past a person “lower than you” (in the Olliff-Cooper’s case, everyone) and not even acknowledge the person? There is a little bit of talk of romance, a man getting dressed and occasional, rare profanity, but major expletives are bleeped and overall, it was a fantastic show! Recipes from Manor House to try!
FRONTIER HOUSE – 1883 Montana – recommend
Couple Gordon and Adrienne Clune went from a very lavish lifestyle to a little log cabin. Their teenage daughter Aine and their teenage niece Tracey participated and although they snuck in this and that, overall, for what they were faced with, they did a pretty good job. Mark and Karen Glenn were my favorites – Karen was a very serious person, although she and Mark definitely had their marriage problems. A young man, Nate, started the project with his father to build a cabin for his soon-to-be-wife. He and his wife, Kristen, actually married during the project and had a frontier wedding! This part was so sweet! Great cast, great people, with many challenges! I highly commend all of them for trying to relive the experience as best they could. Even the two teenage girls, who snuck in make-up and watched a few minutes of TV (the producer was LIVID) didn’t do horrible – especially since they came from very luxurious lives in the 21st century. There’s a few mentions of birth control and a few references to sex in the show, but otherwise it is OK.
For teachers grades 5-9: http://www.pbs.org/wnet/frontierhouse/resources/lessons.html
COLONIAL HOUSE – 1628 – do not recommend – avoid at all costs
This is the only one of the four we didn’t like. The characters were awful! Out of 5,000+ applicants, I don’t know HOW they got chosen. They were whiny, they refused to obey any rules (that adhered to the time period) and they began to purposefully try to gang up on the authorities so they would give in to certain rules (i.e. no profanity, go to church on Sunday, cover your head). Very few of them were trying to relive the colonial experience. Yes, I get they had a lot of tough situations. I’m not saying I would be gung-ho and not want to go back to my cozy 21st century lifestyle. Still, none of them even TRIED to make do with ANYTHING. We never finished this one because I couldn’t stand the cast. It’s a shame, because it had a lot of potential.
For history buffs, also check out 30+ Ways to teach History Without a Textbook!