Chivalrous is the second book in the Valiant Hearts series by Dina L. Sleiman, with the first being Dauntless. 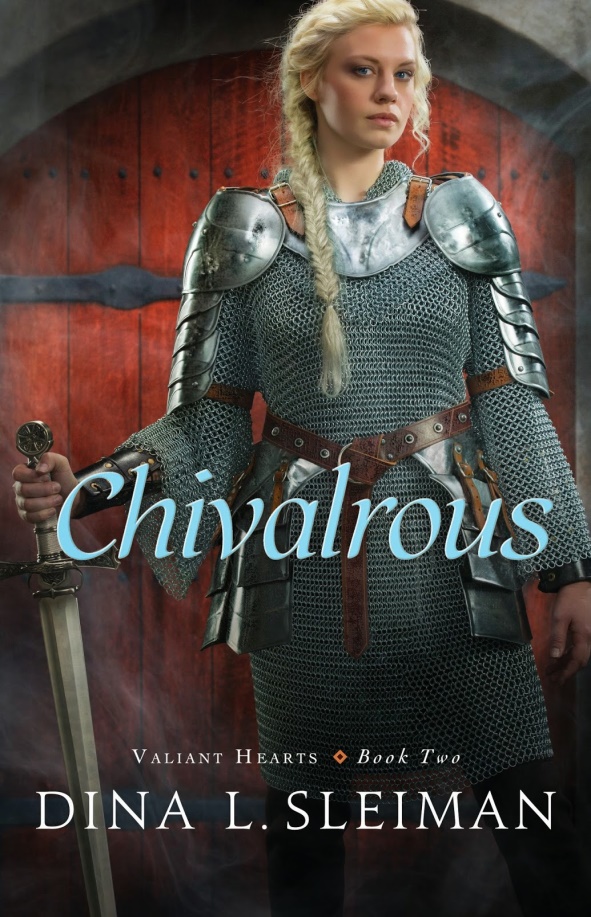 Gwendolyn Barnes is a child of title, her father being the noble, but ruthless Baron Barnes of North Britannia. She is now 16 years old, and without a husband. Though she should have already been married off, Gwen has somehow managed to avoid it, in hopes that three or five years will go by and she can remain a spinstress the rest of her life. Extremely tall, with golden blonde hair, her appearance is quite the mask to hide what free-spirit she has inside.
Instead of doing what noble women usually do, such as embroidering or playing musical instruments, Gwen uses her time to sneak out of the palace to go off with her lady’s maid Rosalind and practice jousting or horse back riding in the open fields. But when her father returns for good this time, Gwen feels as if her life is over. As soon as she meets her father again, he makes his goal clear: He wants to marry Gwen off soon. But not just to any man. He wants a ruthless brute who will be able to tame his head-strong daughter.
Meanwhile, Allen of Edendale, is ready to move on to a new future. After being taken in by Lord Linden, the man who provided sanctuary to the notorious band of outlaws the Ghosts of Farthingale Forest, Allen began to train with his soldiers, along with Red, he friends from their outlaw group. But now, with Allen being newly knighted and learning the news of Lady Merry Ellison and Timothy Grey were to be wed soon, Allen finds that he must go on with his life and decides to head to North Britannia.
When Allen arrives in North Britannia, he learns of a jousting tournament and immediately takes the advantage to make a name for him in this new place that he hopes to call home. Meanwhile, Gwen has ideas of her own. She decides that she is going to compete in the tournament under another royal’s name. She soon realizes she’s going up against the same knight she had been fawning over earlier, which just so happened to be Sir Allen of Edendale. Alas, she is beaten in the jousting tournament and the sword-fighting.
This is just the start of Allen and Gwen’s relationship. Allen gains the Duke Justus DeMontfort’s respect after Allen saves the life of a child, forfeiting another tournament, and Gwen begins to realize how much she indeed does like Allen. But trouble arises when the duke is killed in a cold-blooded murder, and Allen’s old love, Lady Merry Ellison is kidnapped and is forced into marriage. It will take both Allen and Gwen to save the day, and just maybe, realize their growing feelings for each other.
Dauntless was a pretty good read, but I remember not reading it as fervently as I read Chivalrous. I stayed up until 12:40 in the morning under all of my blankets with a flashlight, just dying to finish it before I go to sleep (which I did, successfully). To be honest, in Dauntless, felt less interesting because of my yearning for Merry to get together with Allen. So you can only imagine my excitement at seeing Allen’s story continue in this second book.  Allen is a godly young man who seeks God’s wisdom and yet is still growing in his relationship with the Lord. Gwen has learned that she must look out for herself – because no one else will – but she soon realizes how much she needs the Lord in her life.
Both of the characters were shaped wonderfully. I loved reading through the conflict in the book. Allen being torn by duty and doing what he knows is right in his heart, and Gwen fighting for what she wants to be her future. I also loved seeing the Ghosts of Farthingale Forest make a surprising guest appearance. The supporting characters that played big roles were also some of my favorites. Such as the Duchess DeMontfort, Gwen’s mother, Rosalind, and Gwen’s brother Hugh.
Overall, this book was a great read. The action, adventure, and spirituality balanced out the romance in a wonderful way. I recommend this book for anyone who loves to travel back in time where jousting was the sport of the day, and there were still knights in shining armor.
Disclaimer: I received a copy of this book for free in exchange for an honest review. No other compensation was given.