Books Set in Africa for Kids

Bintou longs for beautiful, flowing braids to replace the fluffy tufts that sit atop her crown. After acting the hero for her cousins, Bintou is granted a wish. Will she choose to ditch cornrows forever or will she decide to embrace her true beauty?

The Day of Ahmed’s Secret by Florence Parry Heide (Egypt)

Ahmed spends the day talking butane gas containers to various stops throughout the bustling city of Cairo. Ahmed trudges through busy marketplaces, crowded alleyways, and streets filled with beeping horns. All the while, he holds his secret close, waiting for the moment he can return home and reveal it to his family.

B is for Baby by Atinuke (West Africa)

Baby’s older brother loads up his bicycle with a bunch of bananas for Baba. Little does he know, his baby sister has secretly stowed away on the trip to the nearby village.

Baby and Mama are weaving their way through a crowded Nigerian market, shopping for fruit. Unbeknownst to his mother, Baby is collecting a bit of food from each stall they pass and filling a basketful.

Bernardi’s treasured music box was handcrafted by his Babu, a gifted toymaker. When a tourist offers Bernardi a price he can’t refuse for the box, he reluctantly sells it, knowing that the money will pay his way to school. Babu takes notice of the difficult decision his grandson made, and begins to craft a brand new box. 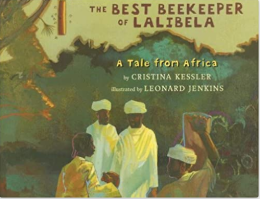 The Best Beekeeper of Lalibela: A Tale from Africa by Cristina Kessler (Ethiopia)

In the mountain village of Lalibela, Almaz watches the beekeepers with fascination. Almaz knows that beekeeping is men’s work, but despite opposition from her neighbors, she determines that she will become the best beekeeper among them.

Afam excitedly plans an outfit and choreography for a Mmo, a celebratory dance. But it seems like everytime he starts his project, another event gets in the way. Will he ever get to perform his dance?

A young girl prepares for her grandmother’s visit. As grandma shows Stephanie how to tie a head-dress and shares her favorite book, Stephanie returns the favor by teaching her grandma how to care for her baby doll and kick a ball.

One Plastic Bag: Isatou Ceesay and the Recycling Women of Gambia by Miranda Paul (Gambia)

In Njau, Gambia, plastic bags were beginning to pile up. Animals choked on them, mosquitoes bred in them, and burned bags left behind a putrid smell. Isatou Ceesay noticed this problem and decided to do something about it. She found a way to recycle the bags and in the process changed the landscape of her Gambian village.

A young Ugandan girl receives a goat, a gift donated through an international organization. With the resources provided by the animal, Beatrice’s family is able to send her to school for the first time.

Seeds of Change: Planting a Path to Peace by Jen Johnson (Kenya)

Wangari Maathai, the first African woman to receive the Nobel Peace Prize, grew up loving nature and animals. Her curiosity was further fueled when she had the chance to attend school. After graduating, she studied at university in the United States and became a renowned environmentalist.

Wangari Maathai’s appreciation for nature and cultivating the earth was borne in her at a young age. In 1977 she became a crusader for the earth with the founding of the Green Belt Movement, an organization that wars against erosion and deforestation. Her efforts have spurred the planting of over 30 million trees to date in her native Kenya. 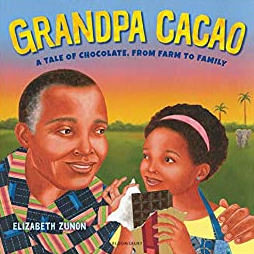 Grandpa Cacao: A Tale of Chocolate, From Farm to Family by Elizabeth Zunon (Ivory Coast)

A little girl is celebrating her birthday by baking a delectable chocolate cake with her father. As they mix the ingredients together, her father tells her all about Grandpa Cacao, a farmer living on the Ivory Coast. While munching on the cake, he tells his daughter that it is because of Grandpa Cacao that they can enjoy chocolate. But the birthday fun isn’t all over yet because someone is knocking at the door…

A little boy’s dreams know no bounds as he looks to the stars above his grandfather’s home. But when the rain starts to come, the boy wonders if his dreams were too big after all.

Siba and Saba have a unique gift: whenever they lose something, they dream about where to find it. But one night, they find two objects they had never lost–a silver shilling and a school uniform. An adventure is about to begin for the two sisters who are always finding and losing with playfulness and grace.

Kondi shakes off his brother’s assertions that he will not be able to make a galimoto, a toy vehicle made from wires. Kondi searches for pieces of wire to complete his craft, and the whole village joins in to play with his creation. 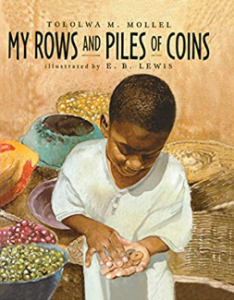 My Rows and Piles of Coins by Tololwa M. Mollel (Tanzania)

Saruni carefully counts and arranges his collected coins in rows and piles, making sure he has enough saved to buy the beautiful red and blue bicycle he saw in the marketplace. He has saved for a long time, hoping that the purchase will help ease the burden his mother has to carry from the marketplace to home. But when he finds he doesn’t have enough to buy the bike, his father steps in to save the day.

A traditional Masai story and play within a play. A cast of characters dons their costumes and begins to act out the story of a group of animals trying and failing to rescue Rabbit from the monster inside her house.

Mustafa gains possession of a colorful rug from his father’s shop after it is found to have a hole. As he runs through the marketplace, a rooster joins him, and a host of tourists from around the world make the noises of the rooster from each of their countries. In the end, Mustafa leads the troupe back to his father’s rug shop.

One bright day in Egypt, a multitude of book lovers gathered to join hands around the Library of Alexandria to protect their beloved collection of books. In a strong display of unity, the people of Alexandria chanted, “We love you, Egypt!” and the library was saved. 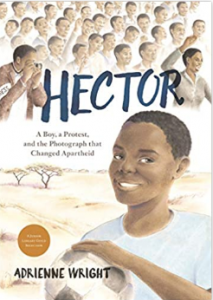 When I Get Older: The Story Behind “Wavin’ Flag” by K’Naan (Somalia)

K’Naan, a rapper, singer, and poet, was a teenager when a civil war rocked Somalia. When the situation became unsafe, K’Naan’s mother moved the family to Canada. After the move, K’Naan struggled to adapt to the strange new land, and eventually did. All the while he has held on to the roots and rich culture he left behind. 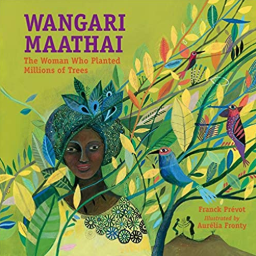 Wangari Maathai: The Woman Who Planted Millions of Trees by Franck Prevot (Kenya)

Wangari Maathai was determined to help her country rid itself from the troubles that plagued it. A voracious learner, she grabbed hold of every opportunity that presented itself and worked to further cultivate and share her love for nature. She founded the Green Belt movement in her native Kenya to help aid in the fight against deforestation and urbanization and paved the way for a hopeful future for Kenya and the world.

The Boy Who Harnessed the Wind, Young Reader’s Edition by William Kamkwamba (Malawi)

When young William’s village was devastated by a severe drought, William began to pour over the books in the library, desperate to find a solution. Soon, he was building a windmill which would change the village forever by bringing electricity to his home and a reliable way to water the fields.

Africa is Not a Country by Margey Burns Knight (Various)

This delightful book showcases the beautiful diversity of daily life, people, plants, animals, and landscapes across the continent made up of 54 distinct countries.

When Mama Braids My Hair by Monique Duncan (Various)

A little girl sits with her mother while she braids her hair into several styles that represent prominent African cultures. First Nikki becomes an African queen, then a Nigerian deity, next a Zulu warrior, and finally a Masai fighter, transported to each culture through her mother’s swift fingers atop her head. 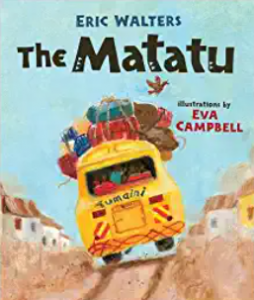 Kioko is fascinated by the comings and goings of the matatus (buses) in his village. Finally, on his fifth birthday, he gets the chance to ride one with his grandfather. He excitedly boards the bus and watches with curiosity as a group of dogs chase after the departing bus. When he asks his grandfather about this, his grandfather spins a delightful tale.

Etabo has always wanted to race camels someday, but it feels like his dream will never come true when water becomes too precious and his father must sell the family camels.

After visiting her extended family in India, Savita returns back to her home in Kenya. As she processes her return home, she discovers a “bundle of secrets” about India that are tied to her Kenyan home.

A West African collection of traditional lullabies and nursery rhymes in several languages, opening a unique window into the world of children in the African continent. 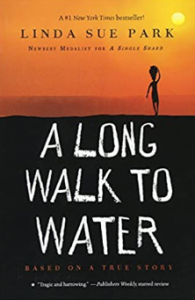 A Long Walk to Water by Linda Sue Park (Sudan)

This story is set across two different years. Nya must make a trek for water that is two miles one way on the daily in order to ensure the survival of her family. Salva, a “lost boy” of Sudan, also must traverse many miles daily in a search for a safe place to rest for the night. The two children both walk in seemingly endless paths across Africa, and in the end, find their ways converging.