King Arthur is not a historical figure, but his legend has fascinated people for hundreds of years. It’s possible he was based on a real man called Arthur that lived in the 400s in Britain. This man helped to organize the Celts against the Saxons, but ended up succumbing to the sword on the battlefield. When the Celts fled to an area of modern-day France, they brought with them stories of their brave leader Arthur. The legend of Arthur has grown to fantastical levels since as storytellers changed and added elements along the way over a period of many years.

According to legend, Arthur was born the son of a king. When the king passed away, he stuck his sword deep in a stone and vowed that the next king to take his throne would be the one who was able to pull out the weapon from the rock. None could but Arthur, who easily pulled Excalibur from the stone even though he was a little child. When he grew up, Arthur presided over the Knights of the Round Table, a cohort of soldiers who pledged their loyalty to him. Together they enjoyed many successful conquests before a traitor among his knights led the group into a battle that ended in Arthur’s fateful death. Enjoy these stories about King Arthur, his knights, and tales of chivalry, dragons, and bravery! 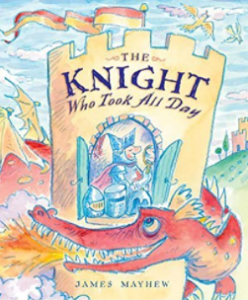 The Knight Who Took All Day by James Mayhew

An imperious knight wants to impress a beautiful woman and win her hand. When he sees a fierce dragon on the horizon, he knows he has come upon the perfect opportunity! He quickly calls his squire to help him prepare for battle, but it soon becomes hilariously obvious that this knight is more concerned with keeping up appearances than slaying dragons.

Watch a knight and the castle he guards prepare for nighttime as the sun sets. To reach his bedroom, he must traverse through dark forests, to brush his teeth he must contend with chomping crocodiles. Good thing it’s all in a knight’s work for this knight! Daytime scenes grow gradually darker as bedtime approaches for everyone at the castle.

Merlin and the Dragons by Jane Yolen

Each night when he lays his head on his pillow, young Arthur’s dreams are riddled with nightmares. What if he’s not the rightful heir to the throne? Luckily, when the doubts begin to take over, the wizard Merlin is there to save the day with a story. He tells Arthur a tale of two dragons, of the battle between good and evil, and helps Arthur understand something about himself in a brand new way.

The Kitchen Knight by Margaret Hodges

In the days of King Arthur, a nondescript man stumbled into the castle, begging to be allowed to stay. Arthur concedes, provided the man works for his bread and water by serving in the kitchen. After proving his worth, Gareth becomes Sir Gareth in a knighting ceremony led by Lancelot. Now part of the Round Table, Sir Gareth enters into the fray of battle and rescue. 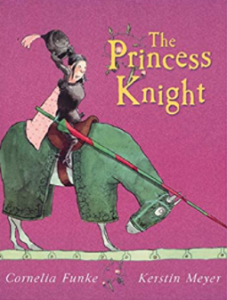 The Princess Knight by Cornelia Funke

The king makes an announcement to the waiting crowd: the winner of the jousting tournament will be gifted the hand of his daughter in marriage. Princess Violet isn’t happy that this is being done without her permission, so she decides to fight on her own behalf, much to everyone’s surprise.

Henry Alfred Grummorson, a many-greats-removed grandson of the legendary King Arthur, desperately wants to live up to the legacy of his famed relative. He sets off in search of adventure, but finds it eludes him entirely. The dragon he meets isn’t interested in incinerating him and would rather blow smoke circles. The cyclops he stumbles on will only challenge him to a staring contest. Will Henry finally find true adventure when he crosses paths with a leviathan?

The Knight and the Dragon by Tomie dePaola

This wordless book is a delight! A dragon who is content to use his fire-breathing for good and a knight who doesn’t really like to fight meet and form a beautiful friendship and a sweet business deal.

Stealing the Sword by Wendy Mass

In this chapter book for younger elementary students, best friends Chase and Ava discover a suitcase full of an odd collection of things. When they look inside, they find themselves whisked back in time to King Arthur’s castle! There they meet the wizard Merlin who reveals the real reason they have been summoned to the past: to rescue the king! 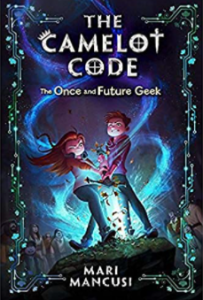 The Camelot Code by Mari Mancusi

When young Arthur accidentally shows up in the 21st century and searches his name on the internet, he decides he doesn’t want to lose his first love or die in battle. If he chooses to stay in modern times, will it mess up too many things and change the course of history forever? Part of a two-book series.

The Otherworld Chronicles by Nils Johnson-Shelton

In this thrilling trilogy, Artie, an avid gamer, is shocked when a special message pops up on his video game. He follows the clues and soon learns that the decisions he makes in the game and real life will have consequences, and it’s up to him to save both worlds.

Of all of King Arthur’s Knights of the Round Table, none will go down in history like the great Sir Lancelot. He was brave, noble, and chivalrous, but only if he could get a nap in first. This lighthearted and hilarious story chronicles the adventures of Lancelot, the courageous and sleep knight. Part of a five book series.

The Sword and the Circle: King Arthur and the Knights of the Round Table by Rosemary Sutcliff

When Arthur pulled a magical sword from a stone when no one else could, his life took an interesting turn. Adventure seemed to find him everywhere he went, leading Arthur to assemble a group of elite knights, win the heart of a fair lady, and learn of magic from a wizard called Merlin.

In this fractured tale, Arthur is not a brave and noble knight, but in fact a bully and tyrant. When the Saxons come against Britain in battle, a young girl named Gwyna finds herself forced into servitude by one of Arthur’s bards, who transforms her into the Lady of the Lake. 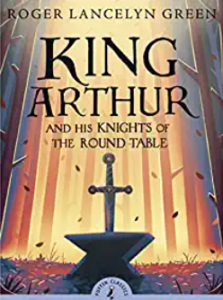 This retelling of the legendary King Arthur and his escapades also includes amazing stories of Lancelot, Gawain, Percivale, Gareth, and Galahad.