On April 15, 1912, the RMS Titanic sank. Learn about this fateful day through these Titanic books for kids, including picture books and chapter books.

If You Were a Kid Aboard the Titanic by Josh Gregory

Meet the many passengers of the Titanic and the features of such a magnificent ship in this fun illustrated read. This story offers a great variety of characters and ways to engage with this moment of history. 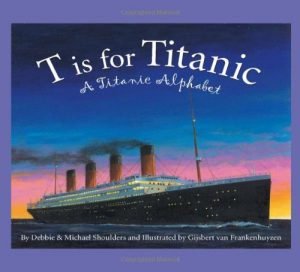 T is for Titanic by Michael and Debbie Shoulders

Learn all about the Titanic and the alphabet in this beautifully illustrated picture book. Authors Michael and Debbie Shoulders incorporate pieces of this ill-fated event to tell the story of the sinking, while also easing kids into it and offering another form of learning.

You Wouldn’t Want to Sail on the Titanic! by David Stewart

This interactive story will keep kids entertained and make them feel like they’re in the story. Read about the Titanic with so many illustrations to aid the many fun questions and facts about the night this ship collided with a large iceberg and changed the lives of so many.

This beautifully illustrated book is the story of a boy, his bear, and their escape from the sinking of the Titanic. This telling of the collision is an easy way for young readers to understand these historical events.

Jim Mulholland has been assigned as cabin boy for one of the finest ships the world has ever seen. He also is in charge of the ship’s cat, caring for her between his duties. When he loses her before the ship takes off, Jim finds himself in the midst of a major struggle that will affect the rest of his life. This touching story is a great way to show another side of the Titanic story and form of entertainment. 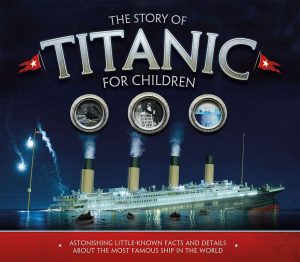 The Story of Titanic for Children by Joe Fullman

This story of the Titanic introduces children to the tragic events an a comprehendible and interesting way. This book of great visuals offers so many little known facts about the great ship.

What Was The Titanic? by Stephanie Sabol

This volume of the What Was? series dives into the Titanic and its disastrous sinking. Read along to hear what happened that cold April night and learn all about the magnificent ship so many couldn’t wait to board.

Tonight on the Titanic by Mary Pope Osbourne

Jack and Annie are taken back to 1912 when hundreds boarded the ill-fated Titanic. Read as they do what they can to save the ship and those around them throughout one of the most frightening moments in history.

After you read Jack and Annie’s exciting adventure, check out this book full of the many facts that coincide with their story. Read about the Titanic and all the information that surrounds this tragic historical moment. 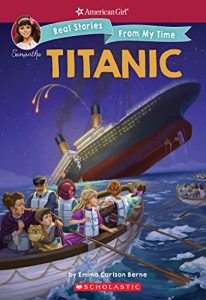 Not only are the stories of real passengers included in this fully illustrated book, but also some of American Girl, Samantha Parkington’s own story. This telling of those tragic events is one that kids can easily be brought into the story from.

Read the stories of ten young individuals whose lives were changed as soon as they boarded the magnificent Titanic in April of 1912. The unique use of young voices offers an interesting perspective to this historical event. I’m a huge fan of Alan Zullo, having read many of his other books.

Voices of the Titanic by Mary Montero

This book of stories from real passengers of the Titanic will be one not quickly forgotten. Read 20 biographies from those who boarded the doomed ship and gain even deeper insight to the tragedy.

I Survived the Sinking of the Titanic by Lauren Tarshis

Read along as George experiences what he thought was the greatest journey of is life thus far, but is face with tragedy in this thrilling account of the night the titanic sunk. This is a great way for kids to get the full story from a familiar perspective. There is also a graphic novel version.

Read detailed information about the supposedly “unsinkable” ship with images that support all the facts. Kids will enjoy being able to get a “real” glimpse into the story of the Titanic and what’s become of it. 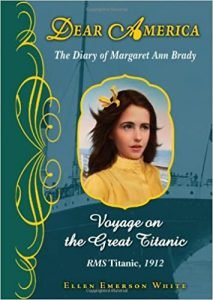 This is one of the most popular renditions of Dear America. Read about Margaret Ann Brady’s Titanic voyage in diary format. I’ve read others in this series and they may be only suitable for middle school students and up, but they are well worth the read.