Tree-ear is an orphan who dreams of watching master potter Min work. He dreams of one day making his own pot, but once the possibility becomes a reality, Tree-ear encounters many obstacles. Park writes the touching story of a boy who has set out to prove himself despite so many odds being against him.

Thirteen-year-old Ming’s father is convinced that Emperor Qin’s tomb and its life-size terra cotta army lie in the land around them. He has limited time to prove his theory or face being sentenced to the labor camps like so many others. Chang explains the history of Emperor Qin and his terra-cotta army and life during the Communist Chinese reign throughout the 1970s to Ming and readers in this action-packed story.

Mai is anxiously awaiting time at the beach when her parents tell her that they’ll be spending their vacation in Vietnam instead. Mai wants nothing less than to be in Vietnam once she’s there and has trouble balancing life back home with the life of her distant relatives here. Though, as she slowly gives into hearing and learning about the culture, Mai discovers the true meaning behind words like home and family.

Jade remains within the walls of her family’s home but is constantly thinking about what lies beyond them. Her older brother has constant stories of trips to the mountains, conversations with new people, and trying new things such as painting. Jade longs to have the same experiences or to even know what some could be like, though she knows life is different for girls than it is for boys. Park’s portrayal of 17th-century Korea and Jade’s contemplation and longing is one that can not be soon forgotten.

Heart of the Samurai by Margi Preus – Japan and America (1841)

After a Japanese fishing boat sinks, the crew is forced to swim to the shore of an unknown island where an American ship eventually rescues them. Manjiro, a fourteen-year-old boy aboard the ship is curious about America and settles there with the ship’s captain. Manjiro lives in New England with him for some time before heading to San Francisco to search for gold. When he finally returns to Japan years later, he’s taken in as a prisoner due to the country’s closed borders. Read along as Manjiro proves himself and his value, even with Western experience.

Inside Out and Back Again by Thanhhai Lai – Vietnam

After the fall of Saigon, Ha and her family must flee. Their new lives are waiting for them in America, but leaving home and reaching new land is yet another challenge. Follow along as Thanhha weaves her personal experiences into Ha’s story. 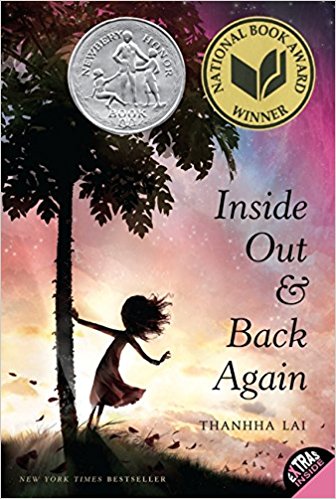 India has been separated into two countries and tension between the Hindus and Muslims have risen. Since twelve-year-old Nisha is half Hindu and half Muslim, she feels more conflicted than ever. As she wrestles with where she belongs and losing her homeland, she writes to her mother, providing readers with insight into her struggle.

When You Trap a Tiger by Tae Keller – Korea

Lily and her family move in with her grandmother to care for her and just as they do so, a magical tiger from her folktales comes to life. As the tiger takes her on a journey through her family history, Lily faces temptation and must find the courage to stand up for those she loves in this provoking and fun story.

The Land I Lost: Adventures of a Boy in Vietnam by Quang Nhuong Huynh – Vietnam

These fifteen tales bring readers into a world of both incredible beauty and danger. Read as Huynh tells of his growing up in the highlands and jungle, where encountering a tiger or deadly snake is a normal daily occurrence and the way that his life drastically changed.

Under the Broken Sky by Mariko Nagai – Manchuria

Natsu and her family live a simple life near the border of the Soviet Union, but it’s disrupted when her father is recruited to the Japanese army. Natsu must now look out for her younger sister, Asa, making difficult decisions as the 1945 Soviet occupation occurs and effects them.

Children of the River by Linda Crew – Cambodia/America

When she was thirteen, Sundara was forced to flee Cambodia without her family. As she starts high school in Oregon, Sundara struggles to fit in. Read this story of a young girl who has much more than the typical high school struggles to deal with.

Hang takes her brother Linh to the airport as the Vietnam War comes to a close. She is desperate to find a way for them to reach America, but before she can do so, Linh is ripped from her arms and she’s left behind. Six years later, she finds herself in Texas as a refugee, clinging to the dream of finding her younger brother. Join her on her journey through what is lost and what is yet to be found in this touching story. This one is best for grades 7+.

Princess Kazunomiya falls in love with a Prince, whom she has been promised to for years. Suddenly, she is promised to someone else for political power. This historical love-triangle romance is best for grades 5+. It offers rich insight on Japanese history and culture.

Chiko’s father is a doctor, but is now in prison for resisting the government. Chiko is devastated, but doesn’t have a desire to fight. Tu Reh does. He wants to fight for his people’s freedom because of the way he saw it being taken from them as his family’s home was destroyed. As the war rages on, each boy is changed in a multitude of ways. Read as they discover each other and what is really happening around them. This one is best for grades 7+.

Ji-li’s world begins to crumble as China’s leader starts the Cultural Revolution. Those she once was familiar with start to turn on her and her family and Ji-li can’t understand why. As she and her family are imprisoned, she faces one of the most difficult decisions yet. Read as she describes life in Communist China during 1966.

During World War II, Manzanar was created. In the desert mountains of California, thousands of Japanese Americans lived in camps. Read as Jeanne recalls her family’s experience there in 1942 in this inspiring memoir.