Check out these Ancient history children’s books about Rome and Italy to learn more about important events in Ancient Italian and Roman history.

Jack and Annie travel back in time to collect a valuable tome from Pompeii. But when Mount Vesuvius erupts above them, the siblings must find a way out of the city with the book before its too late. 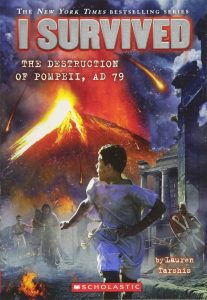 I Survived the Destruction of Pompeii by Lauren Tarshis

Marcus knows his father is a learned man of science, and he has also come to trust when his father doesn’t feel good about something. As Marcus sees the worry lines dig deeper grooves on his father’s face, he starts to worry too. Soon the two find that their fears were not unfounded. The sleeping mountain overshadowing their town awakes and Marcus and his father must flee for their lives.

Escape from Pompeii by Christina Balit

When cinder and ash fell from the sky that fateful day in 79 A.D. Pompeii, Tranio and Livia escape the destroyed town in a boat. As they sail away, they witness the ravaging of their beloved home at the mercy of the molten lava.

Flavia and her band of unlikely heroes must find out who is killing guard dogs around their port city home of Ostia before its too late. This captivating tale has a fast-paced plot that will have readers rooting for the lively Flavia, Jonathon the secret Christian, Nubia the slave, and Lupus the beggar as they seek justice in Ancient Rome.

The Last Girls of Pompeii by Kathryn Lasky

Julia, the daughter of a wealthy ship-builder born with a withered arm, and Sura, her beautiful slave, are living in the shadow of Mount Vesuvius in Ancient Rome. Julia’s family plans to ship her off to a temple because of her birth defect, and it is likely that Sura will also suffer a dreadful fate. The two girls band together when fire begins raining from the sky and try to flee the erupting mountain before they perish. Recommended for readers ages 13 and up for some mature themes.

Detectives in Togas by Henry Winterfield

A fun mystery set in Ancient Rome. Rufus is getting a lot of flack for the rude message painted on the temple of Minerva, problem is, he didn’t do it! Can he and his friends find the true culprit before Rufus has to suffer the consequences? 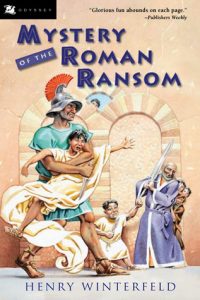 Mystery of the Roman Ransom by Henry Winterfield

Rufus and his friends are back in this fast-paced detective tale. The boys acquire a slave to give as a gift, but soon they find out he’s not who they thought he was, and they are scrambling to save the father of one of their crew before the mystery man assassinates him.

Romans on the Rampage by Jeremy Strong

Perilus loves the thrill of a good chariot race. He ceaselessly practices for the day when his dream of becoming a charioteer will be fulfilled. His pieced-together contraption pulled by his pet goat isn’t close to the real thing, but when a spot needs filled in a chariot race after tragedy strikes, Perilus hopes he’s up for the challenge.

A Roman soldier, politician, and charismatic speaker, Julius Caesar had it all. His rise to power and dictatorship gained him some enemies, and a group of Romans intent on bringing his reign to an end mercilessly assassinated him on the now-infamous ides of March.

The Roman city that was buried in ash as Mount Vesuvius spilled her contents over the people below wasn’t uncovered again until the mid-1700s. This guide to all things Pompeii explains what happened on that tragic day and also contains pictures and explanations of what followed when archaeologists came to town. 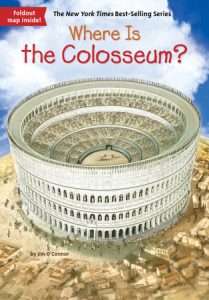 Readers will be enthralled with the stories that took place inside this impressive structure. Built for entertainment, scores of people flooded the Colosseum to be shocked and dazzled by the games within. After the fall of the Roman Empire, the Colosseum remained and is still standing today as one of Italy’s most popular tourist attractions.

Jack and Annie return home after their rendezvous in Pompeii, and they have a lot of questions to be answered. Join the siblings as they find out all about daily life in Ancient Rome, how the civilization rose to power, what happened to the famed city of Pompeii after the volcano erupted, and more.

Readers will love becoming Ancient Rome historians with this fun guide to all things Roman. There are quizzes to take, fun facts to share, and lots of pictures to view!

Full-color foldout flaps help to immerse readers in the experience of reading about this fascinating time and place in history. Includes 3D models of buildings and gathering places of the city before its destruction, the volcano during the eruption, and the perfectly preserved imprints of human and animal bodies found afterward.

The day that ash and fire rained from the sky and snuffed out life in Pompeii is richly described in this Step Into Reading book.

This exciting account of the day Mount Vesuvius erupted and Pompeii was buried is complemented by paintings similar in medium and style to the artwork that was found when archaeologists began excavating the site in the 1700s.

Bodies From the Ash by James Deem

This book is filled with intriguing pictures and interesting accounts of the day Pompeii was annihilated by a nearby volcano, its disappearance until the eighteenth century, and the surprising findings of archaeological expeditions hundreds of years later.

In 79 A.D., the people of Pompeii were going about life as usual when suddenly Mount Vesuvius, which they thought was only a harmless mountain, erupted and fire and lava rained down on the city. Afterward, the city was completely buried in ash and was not re-discovered until the 1700s. Find out why you wouldn’t have wanted to be there on that fateful day. 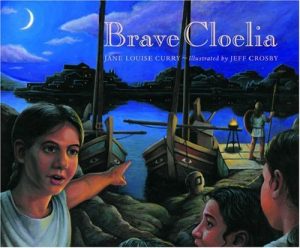 In this true story of courage in the face of danger, a young Roman teenager named Cloelia is kidnapped by the Estrucans along with several others. Her ingenuity allows her to escape, but then she returns to appear before the king and make a way for the other hostages to be released. Her bravery was lauded by many in Rome and a statue was erected along the Sacred Way in her honor.

If you had just gained a position as a centurion in Ancient Rome, this guide would help you know how to eat, dress, and survive.

So You Think You’ve Got it Bad: A Kid’s Life in Ancient Rome by Chae Strathie

Kids will love reading about some of the gross and gruesome aspects of life in Ancient Rome. Life wasn’t easy back then, as this book will prove with its stories about washing clothing in urine, snacking on rodents, and fighting gladiator-style!