The non-fiction companion to Hour at the Olympics (see below), this book tracks the facts about the first Olympics and fifth-century Greece after Jack and Annie return from their adventure and have a lot of questions. 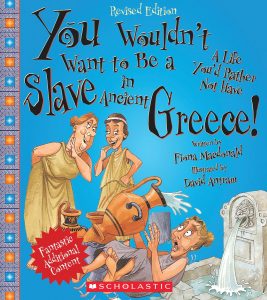 You Wouldn’t Want to be a Slave in Ancient Greece! by Fiona MacDonald

Readers will love this humorous and interesting account of slavery in ancient Greece. This book takes a lighthearted approach to a very dark subject, but does not leave out the grisly truth. For this reason, it is recommended for ages 9 and up.

Aimed at ages 7 and up, this factual read is a great introduction into one of the most important and intriguing civilizations of the past.

Where is the Parthenon? by Roberta Edwards

Do you know what the Parthenon was used for after its years of being a temple were through? Discover the Parthenon all throughout history–from its conception in 438 B.C. as an honoring place to the goddess Athena, to a church, then a mosque, an armory, and eventually a tourist site.

If You Were Me and Lived in Ancient Green by Carole P. Roman

The Trojan Horse: How the Greeks Won the War by Emily Little

Helen of Troy is being held by the Trojans and the Greeks must come up with a plan. Discover the amazing story showcasing the resourcefulness of the Greeks in this “Step into Reading” tale.

Written in an alluring graphic-novel style format, this work depicts both the mundane and the avant-garde aspects of life in ancient Greece that made it a celebrated civilization then and now. 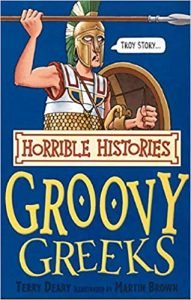 Read all about the groovy (and gross) lives of the ancient Greeks, from running naked in the Olympic games, doctors who tested ear wax by tasting it, and the first running water toilet in Athens.

Wise Guy: The Life and Philosophy of Socrates by M.D. Usher

Perfect for grades 2-4, this biography on the father of western philosophy is sure to delight. Readers will learn about Socrates’ life, his early start into philosophy in his local marketplace, and his eventual demise. The ending also features other significant people throughout history who were influenced by this man’s great thinking such as Martin Luther King Jr. and Erasmus.

The Parthenon: The Height of Greek Civilization by Elizabeth Mann

The Parthenon is the heart of Athens in the ancient world. This book outlines the intricacies of its construction and the importance of this exceptional structure.

Archimedes and the Door of Science by Jeanne Bendick

With humor and straightforwardness, Jeanne Bendick introduces readers to Archimedes, the ancient Greek mathematician and scientist whose contributions to the fields changed them significantly. 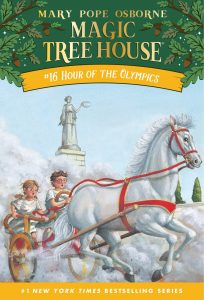 Jack and Annie find themselves whisked into an Olympic-sized adventure when they travel in the treehouse back in time to the first Olympic games. Girls aren’t allowed to participate or even watch the games, no exceptions. But when Jack goes in without Annie, he wonders if she has a plan to see them after all. Book #16 in this much-beloved series.

Game on in Ancient Greece by Linda Bailey

Three modern-day children are all set to travel through time in order to be present at the future Olympic games. But when a mistake sends them back in time to the first Olympic games in fifth-century Greece, the kids find themselves trying to figure it all out in this comic-book style adventure.

Theras and His Town by Caroline Dale Snedeker

Theras spends his childhood in Athens before being seized and taken to Sparta. Contains themes of courage in the face of adversity and victory.

The Gods and Goddesses of Olympus by Aliki

A wonderful introduction into the Greek myths that have enthralled people throughout the ages. Readers will come to understand the stories that the people of ancient Greece used to help explain events of nature and genesis in an age-appropriate way.

Young Pythagoras learns about right angles and geometry while on a building adventure in ancient Greece. A fun way to tie in math/STEM into your study of history for ages 7-10.

Pythagoras and the Ratios by Julie Ellis

Pythagoras is back–this time with his cousins. As the troupe tries to find a solution to their out-of-tune instruments in time for a music competition, they discover a ratio that helps them understand how to make the instruments sound nicer. 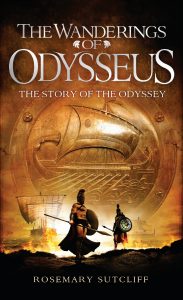 The Wanderings of Odysseus by Rosemary Sutcliff

This much-celebrated work about the formidable Odysseus is transformed into a more digestible read for modern-day readers. Recommended for ages 12 and up.

Our Little Athenian Cousin of Long Ago by Julia Darrow Cowles

Duris, a young boy living in Ancient Greece, takes readers on a day through his life as he attends school, gathers food from the marketplace, and becomes part of the Olympic games.

Perfect for early elementary readers, this collection presents children with easy-to-understand versions of the Greek myths alongside colorful illustrations.