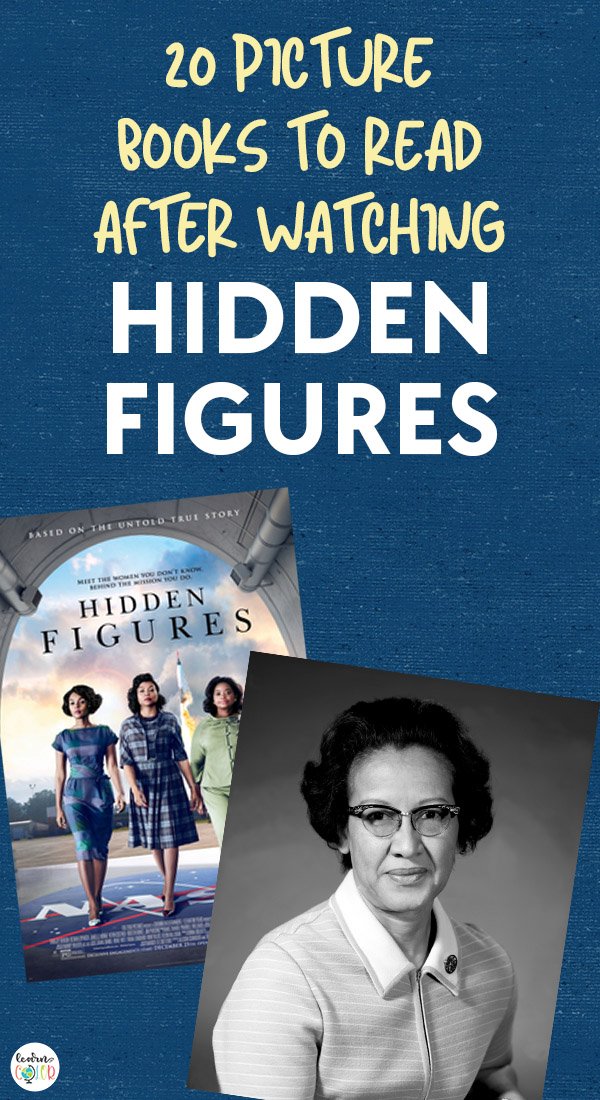 Hidden Figures is the true story of brilliant mathematician Katherine Johnson. Despite facing racism and sexism, her brilliance helped America in the Space Race against the Soviet Union.

Learn about the real brains behind some of NASA’s greatest moments: Dorothy Vaughan, Mary Jackson, Katherine Johnson, and Christine Darden. Their mathematical skills and determination allowed them to make history for NASA, the United States, and the world!

Katherine always had a brain that loved to learn. Math was her specialty. After starting college at the age of 15 and graduating at 19, she joined NASA as a “human computer”, or person who painstakingly checked mathematical equations in order to assure quality and safety of spacecraft.

Counting the Stars: The Story of Katherine Johnson, NASA Mathematician by Lesa Cline-Ransome

Even as a child, Katherine Johnson had an insatiable desire to learn. She was always asking questions and wondering things about the way the world worked. This curiosity led her on a path that took her to a job at NASA, where she began to calculate pathways for spacecraft, including John Glenn’s orbit around earth. 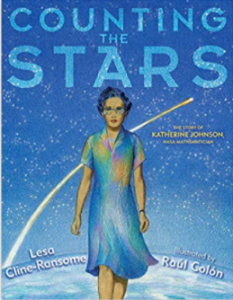 Ruby Bridges became the first child to attend an all-white school at the age of six in 1960. Daily she courageously faced rotten fruit being thrown at her, screaming protesters, and cruel bullies. Her bravery paved the way for desegregation in all schools. Check out the movie here and grab the movie guide here.

Dad, Jackie, and Me by Myron Uhlberg

In the summer of 1947, Jackie Robinson’s name is all over the news as the first Black player in baseball’s Major Leagues. A young boy eagerly listens to the games on the radio and reports the happenings to his deaf father using sign language. Together they cheer Jackie on from a distance, until one day his father tells the boy they are headed to Ebbets Field to watch him play in person!

The Youngest Marcher: The Story of Audrey Faye Hendricks by Cynthia Levinson

When Audrey heard about the segregation taking place in her hometown of Birmingham, the nine year old knew she had to do something. When a march was organized, Audrey was right there too, holding a picket sign and walking bravely forward until she was arrested by police. Her story will impress upon children that you are never to young to stand up for what’s right. 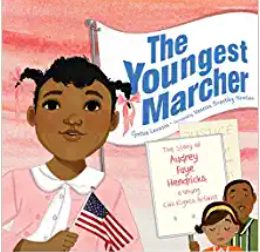 This is the story of Rosa Parks, told from her perspective, in the days leading up to December 1, 1955 when she took a bus ride sitting down. Although the events of the story are familiar to most children, this book gives it a fresh perspective.

Brave Fannie Lou Hamer stood up during the Democratic National Convention and stirred hearts to action with her speech on the need to work towards civil rights for all people. Even President Lyndon B. Johnson tried to keep her silent, but she knew what was right, and she kept on fighting.

Preaching to the Chickens: The Story of Young John Lewis by Jabari Asim

Long before John Lewis fought for civil rights and went to Washington, D.C. as a United States Representative, he was a boy with a tender heart who wanted to pastor others. Young John preached to the animals on his family’s farm, cared for them, and even baptized them. While he practiced shepherding the animals, he was really preparing to lead people on a much larger scale in his adult life.

Freedom on the Menu: The Greensboro Sit-ins by Carole Boston Weatherford

Connie enjoys going to town to shop with her mother, but soon begins to realize that things aren’t the same for all people. There are stores she and her mother aren’t allowed to enter, drinking fountains they can’t drink from, and restaurants they aren’t welcome to eat at. After Dr. Martin Luther King Jr. inspires the people in town to do something about the injustice, Connie finds herself sitting with her family at a lunch counter that has a sign saying Black people are not welcomed. Provides a child-friendly introduction to the Greensboro Sit-ins. 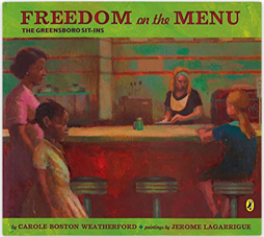 Picture Books about NASA and the Space Race

Learn about Mae Jemison, a young woman who made history when she was the first African-American woman to travel with NASA to space. This book is a great overview of Mae’s life and a great story to inspire other young girls to follow their dreams. Grab the book guide here.

John Glenn loved to fly and he loved his country. These two loves led him to his job at NASA, where he bravely became the first person to orbit earth.

You Wouldn’t Want to Be on Apollo 13! by Ian Graham

This book puts a lighthearted spin on what was an unlucky event in our nation’s history–the failed Apollo 13 mission to the moon in 1970.

An introduction to the Space Race leading up to the famed 1969 moon landing. The author describes the state of the nation on that exciting day and the way people sat glued to their television screens, absolutely enthralled. For children who are fascinated by science, this book is great as it goes into some detail about the science, math, and technology involved in making mankind’s first step outside of earth a successful one. 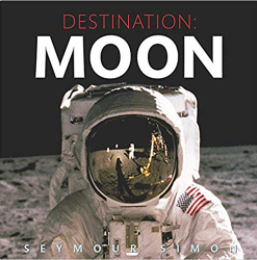 This book showcases the amazing accomplishments of Black women throughout history to today in fields like science, math, and engineering. It also gives a good introduction to some super-cool careers in these areas that just might motivate young girls and boys to achieve their future goals and dreams.

Raye Montague knew she wanted to be an engineer after stepping foot on a German submarine boat as a young child in the 1940s. She was a brilliant mathematician, and her drive and talent served her well as she worked towards her dream. Despite others trying to stop her from her dreams because of her gender and skin color, she persevered and rocked the boats of the U.S. Navy!

Talkin’ About Bessie: The Story of Aviator Elizabeth Coleman by Nikki Grimes

Bessie Coleman was frustrated with always being told what was and wasn’t acceptable for a poor Black woman to do. Segregation and Jim Crow laws sought to put a lot of limitations on a woman like Bessie, but she did not let anything stop her on her way to reaching her dream of becoming the first African American pilot.

The Doctor With an Eye for Eyes: The Story of Dr. Patricia Bath by Julia Finley Mosca

Patricia Bath knew she wanted to make a difference in the world by becoming a doctor, but when she began her journey she had no idea what barriers she would face! Despite the odds being stacked against her, Patricia Bath reached her goal and even began came up with a treatment for blindness! 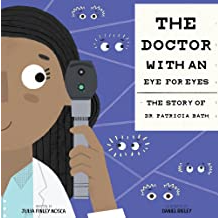 Sarah Goode was one of the first Black women to get a U.S. patent. After seeing there was a need for a bed that you could use for multiple purposes, she creatively came up with the invention of the cupboard bed.