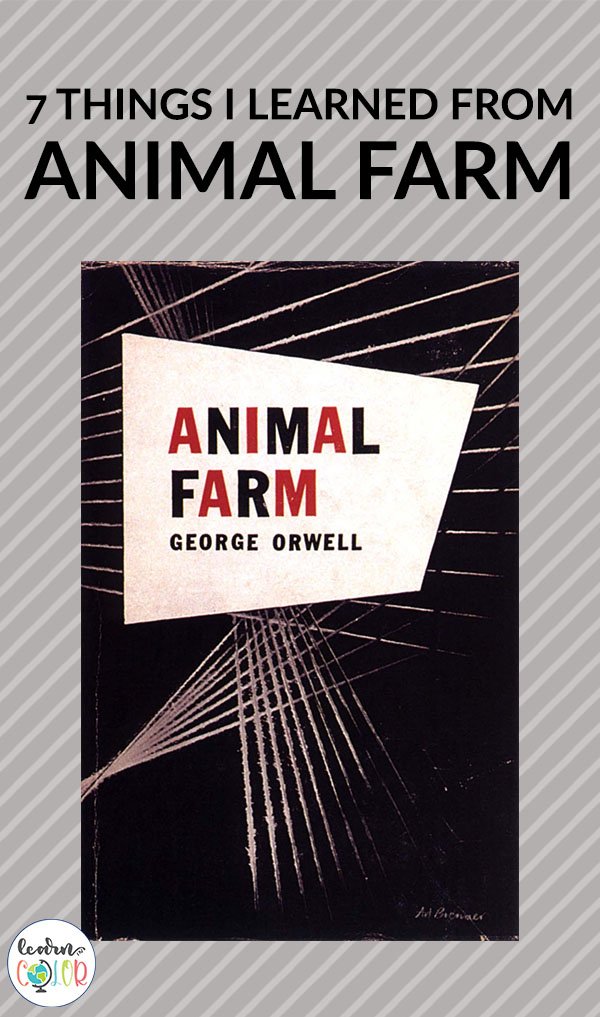 Those who do not learn from history are doomed to repeat it.

I believe that quote with all my heart because it has happened before.

Being into politics, I have seen tons of George Orwell quotes and “Big Brother” references. Since I was a bit scared to start out with 1984 but I wanted to read something by Orwell, I settled on Animal Farm. It took me a long time to read because it was so deep. My analytical mind feasted.

Depending on how you read it, this can be a very simple novel (if you just “read” it) or it can be a very detailed political novel. After I do lots of research on Communist Russia, I want to reread it and see how my perspective on the novel changes.

I was planning to do a review on this, but instead, since there are millions of reviews out there, I’ll list some things I learned from this great piece of literature.

1. It is easier to control ignorant people rather than educated ones.
The children in schools are America’s future. What is taught in schools will be the future. Our public schools are raising ignorant people. They are taught that truth comes from authority only and to obey without thinking. They are all raised the same (Common Core) and are “weird” when they think different and question ideas.

2. Even if others (politicians) seem smarter, that doesn’t mean they will do whats best for you.
The animals in Manor Farm elected the pigs in charge because they were smarter. Perhaps the pigs started out well-meaned. Once the pigs realized that all of the animals listened to them without thinking, they started to abuse their power. Boxer begins saying, “Napoleon is always right.” This is one of the worst things to believe about anyone.

3. Too much government leads to dictatorship.
For the same reason as #2. Politicians generally do not care about you and they only care about themselves, their families, and their friends. The government does NOT have you in their best interest.

4. Blind obedience is a main cause of brainwashing.
“If you tell a lie big enough and tell it frequently enough, it will be believed.” -Adolf Hitler
One of the reasons I read Animal Farm is because I wanted to discover Orwell firsthand – I didn’t want any bias, conservative or liberal, to shape my opinion. I try to start out at a neutral view, weigh the facts, listen to both sides, and then decide my opinion.

5. People are willing to follow, and love, dictators…as long as they sound good.
At the end of the story, the animals were in the same position as they were in the beginning of the novel under Farmer Jones. Once people begin to think and learn the signs of dictators, they are very easy to spot out. Remember, Hitler preached change and everyone loved him and followed him blindly, despite much horrible evidence against him, because “Hitler is always right!” Napoleon preached change (over-throwing Farmer Jones) and the animals began blindly following them, despite much horrible evidence against him, because “Napoleon is always right!”

6. You cannot destroy an entire evil at its zenith.
When multiple animals come forward and admit “crimes” against Napoleon, Napoleon commits the first murders at Animal Farm. At that point, it would have been impossible to stop because of how powerful (big government) Napoleon was. I am very fond of the quote, (paraphrased, multiple people have said it) “The Holocaust did not start with a gas chamber. It began with, ‘you cannot sit on that bench.'” After letting the “little things” slide, the small farm turns monstrous and you cannot stop it.

7. Rewriting history and lying are the first steps to brainwashing and dictatorship.
When the pigs begin rewriting the Seven Commandments, some animals realize something is wrong, however they do nothing about it. I recently read an article about a school in Britain that was omitting the Holocaust from their studies to not “offend” Muslim students. Are you kidding?? You CANNOT pretend the Holocaust didn’t happen and that is why I research so much about it. You CANNOT rewrite that time period to make somebody happy. Sorry.