I have been heavily studying World War II and the Holocaust for over two years, and in that time, I have always wanted to meet a Holocaust survivor. I had that chance. Yesterday (April 16), I had the privilege of a lifetime meeting Holocaust survivor Ms. Eva Mozes Kor and it was the most amazing time of my life. I was speechless – I could not believe I was meeting a Holocaust survivor!

Eva’s lecture consisted of three parts; her story, her message on forgiveness, and her life lessons. I have seen many videos of Holocaust survivors speaking, but being in the same room with her and hearing her in person was priceless. I have heard many Holocaust stories, but her message on forgiveness and her life lessons were so powerful! A camcorder cannot do justice to the powerful, inspiring testimony of a Holocaust survivor told in person. You hear, live, the emotion. This is a short news video of Eva. (this is the one I attended)

Please see Eva’s full story on her website here. Eva and her twin sister Miriam were only ten years old when they and their family were taken to the infamous death camp Auschwitz-Birkenau. Since they were twins, they were subject to inhuman, bizarre Nazi experiments by Josef Mengele. Although she and Miriam survived, the rest of her family were murdered.

Years later, in 1993, she actually forgave the Nazis for everything they did to her and her family and she went back to Auschwitz. Her story is documented in her memoirs Surviving the Angel of Death (for tweens and teens) and Echoes From Auschwitz.

Anyways, in her lecture, she gave us her five life lessons that I must share. 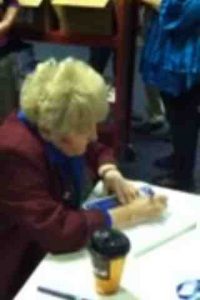 Number two was my favorite, and number four had me teary eyed.

Of course, a simple blog post cannot compare to hearing her speak and tell her story in person. Afterward, I (well, Dad) bought her memoir Echoes From Auschwitz (I had already read Surviving the Angel of Death) and she had signed it and wrote my name in it. (I will treasure it always!)

In my head, I have always replayed the scene I had imagined of me meeting a Holocaust survivor. But…the reality was quite different. I could barely get my name out, let alone ask any questions. All I said basically was thank-you for coming. I think (know!) I sounded like an idiot.Eva currently lives in Terre Haute, Indiana, and has a museum called CANDLES, Children of Auschwitz Nazi Deadly Lab Experiments Survivors, dedicated to the victims of the Auschwitz lab experiments.

If you ever happen to be in southern Indiana, I would strongly encourage you to visit. Here is a 30-minute video of Eva sharing her story. This is VERY powerful and not graphic and I would encourage everyone to watch it.