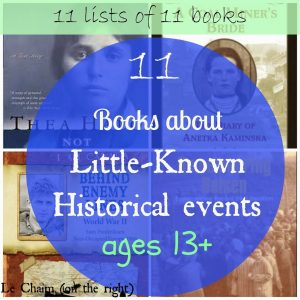 Coal mines and the Lattimer Massacre – September 1897
A Coal Miner’s Bride by Susan Campbell Bartoletti
Until reading this book, I had never heard of the Lattimer Massacre. On September 10, 1897, about 300-400 coal miners (mostly immigrants) protested against unfair wages and treatment. 19 miners died, and several other were injured.
This book, A Coal Miner’s Bride, tells the story of the fictional Anetka, a young Polish teenager who moves to America after her father arranges a marriage to a widower with three girls. A Coal Miner’s Bride is a great story about immigration, coal mines, strikes, and true love.
The Ireland Potato Famine – 1845-1852
Nory Ryan’s Song by Patricia Reilly Giff
Approximately one million Irishmen died of starvation after a potato disease killed Ireland’s large potato crop. Another million immigrated to America, and this is one of those stories.
The fictional Nory Ryan and her family have lived in Ireland for decades, but life is not easy. The story of this young girl’s resilience is amazing!
To top it off, Patricia Reilly Giff is a very talent writer. Nory Ryan’s Song‘s sequel is Maggie’s Door. Both novels are great and an excellent look at historical fiction.
Anti-Semitism in America – 1862
The War Within by Carol Matas
In 1862, Ulysses Grant issued General Order #11, expelling all Jews from Kentucky, Mississippi, and Tennessee. The Jews in these areas had 24 hours to pack their stuff and move.
Growing up proper Southern in Mississippi, 13 year-old Hannah’s life is changed from these events and more. As she moves up north with her family, her views began to slowly change as she matures over the course of the American Civil War. 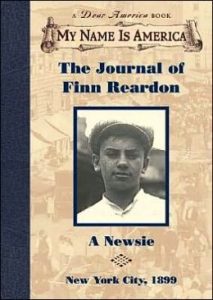 The Newsie Strike – July-August 1899
The Journal of Finn Reardon: a Newsie by Susan Campbell Bartoletti

You may have heard of the Newsie strike thanks to the Christian Bale movie. Ironically, a few of the characters in the Disney movie were real; except the main characters. Kid Blink (with the eyepatch) and Racetrack (who sang “King of New York” were two real people.
In 1898, during the Spanish-American War, newspaper costs increased. The newsies had to buy the papers for 60 cents instead of 50 cents. They would sell the newspapers for one cent each, originally making 50 cents. After the war, all the newspapers lowered their prices; except the New York World and the New York Morning Journal.
The REAL Newsie strike was from July 20th to August 2 and the leader was Kid Blink. Although the movie shows the strike as a huge success, it actually was a partial failure. The only thing that changed was both papers agreed to buy back any unsold papers the newsies had.
The Journal of Finn Reardon is part of the series My Name is America. My Name is America is the “boy” version of the “girl” series Dear America. Although Finn Reardon is fictional, many characters in the book are real.

Jewish persecution in Russia – late 1800s and early 1900s
Sworn Enemies by Carol Matas
I had heard of Jewish persecution in Russia, but I never really realized how bad it was until I read Sworn Enemies. The Russian government was kidnapping young Jewish boys (as young as age 8) for the Russian army. Ultimately, the goal was forced conversion to Christianity.
This book is told from the views of two Jewish teens who have both been spared from the czars army for different reasons; Zev who is spared from because of his job as a chapter (he is the one who actually does the kidnapping) and the scholarly Aaron, whose father is paying the government not to arrest him.
In a twist of fate, both Zev and Aaron are both arrested and soon meet up with each other. Will they set their differences aside to work together? {A twist ending!}

SPOILER: I found this ending really incomplete, as Aaron and Zev still hate each other as the final pages close.

Armenian Genocide – 1915
Not Even My Name by Thea Halo
During and after WWI, 1.5 million Armenians and Greeks were senselessly murdered. In this memoir told by her daughter Thea, Sano describes life as a little girl growing up in Turkey and facing horrible persecution. At age fifteen, Sano is brought to America and continues her everyday struggles, including marrying a 40-something year-old man. I really enjoyed this memoir, but it was very heart-breaking to read at times. It was well-written and kept me intrigued.
Hello Girls – WWI
When Christmas Comes Again: The WWI Diary of Simone Spencer by Beth Seidel Levine (A Dear America Book)
In 1917, over 7,000 French-speaking American girls signed up for the job as a “hello girl” – a switchboard operator. Only 450 were chosen. General John Pershing “created” this job to improve communication on the Western Front.
Although this is a fictional story, like most books in the Dear America series, it stays close to real-life.

168 Allied airmen in Buchenwald – October 1944
Behind Enemy Lines by Carol Matas
This is probably the least-known event I’m featuring. The stories that came out of WWII never cease to amaze me. Some stories are bizarre beyond bizarre (like the cat who survived the sinking of three different ships) and some just show everyday men with an insane amount of courage (The Great Escape, Escape From Sobibor). This is one of those stories.
For two months, 168 Allied (82 Americans, 48 Brits, 26 Canadians, 9 Australians, 2 New Zealanders and a Jamaican) airmen were held prisoner in Buchenwald concentration camp after crashing in France.
This story, although fictional, is about a young Canadian pilot who goes through this.

If you are interested, there is an amazing documentary (I was one of the lucky few who watched it on the Military Channel in November!) called The Lost Airmen of Buchenwald.

The liberation of the Bergen-Belsen concentration camp is known as the biggest medical relief in history. Being said, all material on this subject is VERY graphic, but the liberation of Belsen is an AMAZING story. Out of all of the resources, I am featuring Remembering Belsen because it is written primarily through stories of survivors and liberators; the entire book is filled with testimonies, not words from the author.
Recommended for ages 13+.
Other great books about the subject include: (I have read all)
Letters From Belsen 1945 by Muriel Knox Doherty
The Survivors: The Story of the Belsen Remnant by Leslie Hardman
After Daybreak by Ben Shepherd
Straight On by Robert Collis 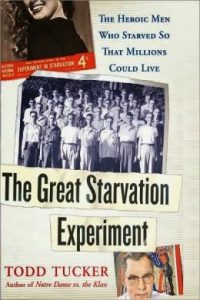 The Minnesota Starvation Experiment – WWII
The Great Starvation Experiment by Todd Tucker
I have not read this book, but it looks very interesting. During WWII, (all?) young men were drafted. This was a problem for young pacifists, who didn’t want to fight but wanted to do something important for the war effort.
The pacifists had the bizarre jobs (like working in asylums – a whole other story) of the war that nobody really wanted. Voluntarily starving yourself to death for an experiment was one of those bizarre jobs.
This tells the bizarre/fascinating WWII story of 36 pacifist men who volunteered for a starvation experiment. The experiment tested refeeding, the effects of starvation, and rehabilitating starvation victims in war-torn Europe.

Anyone who’s read this or knows more about it: Let me know what you think.

Cambodian Genocide – 1975
First They Killed My Father by Loung Ung
The Cambodian Genocide lasted from 1975-1979 and resulted in the death of two million Cambodian citizens. The genocide was after the Cambodia Civil War. The perpetrators were the Khmer Rouge, Cambodia’s Communist party.
This is the story of a young girl who survives against all odds. Despite the majority of her family not surviving, Loung does survive. I haven’t read this yet, but it has pretty great reviews. Due to the nature, I would imagine this is best for grades 9+.
What are some books that are part of the little-known and obscure events in history? I’d love to hear your thoughts and recommendations!I love learning about history!!