History should never be boring! Here is a list of 100 quality historical books for kids, reviewed. I have read most of them, and the ones I haven’t, they look really good and I feel comfortable recommending them. I tried to include a mixture of well-known classics, with many of my little-known favorites. 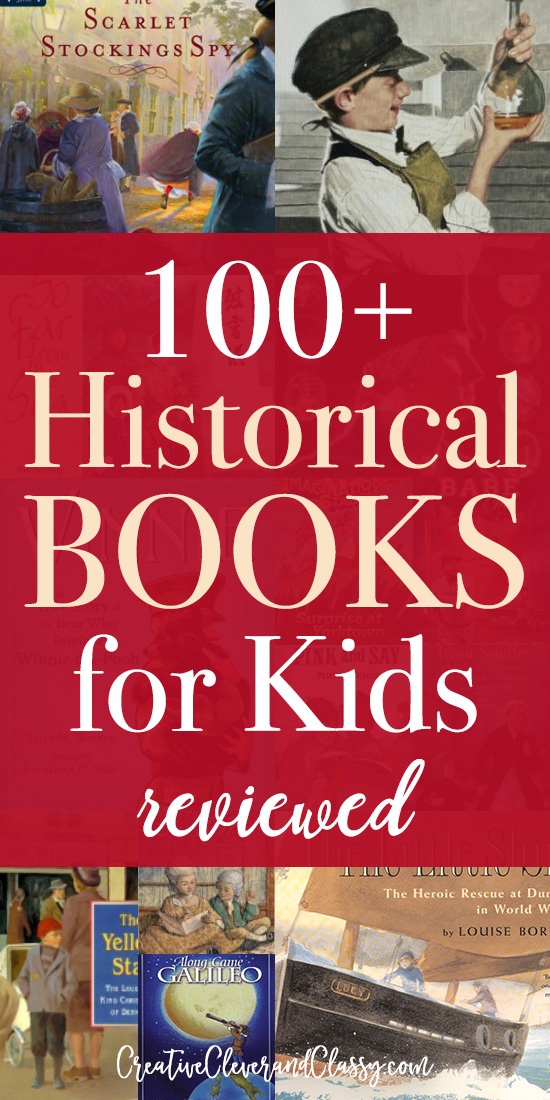 All books have no profanity or sexual content, but they may have some realistic war violence. However, I don’t believe in sheltering kids from this. As C.S. Lewis said, “Since it is so likely that children will meet cruel enemies, let them at least have heard of brave knights and heroic courage. Otherwise, you are making their destiny not brighter but darker.”

This part covers books for grades 1-4, and includes picture books and age-appropriate read-alouds. This is part 1 of 2.

Magic Tree House series by Mary Pope Osbourne – Varies
I know some Christians don’t like this book because of the “magic” – but in the original, standard 26 books there is really is nothing occult or witchcraft or anything. Part history, part geography, part science, this series is about time-traveling siblings. Whether they’re swimming with dolphins, learning with Shakespeare, or helping Clara Barton, this is a great series for younger kids!

Anholt’s Artists Books for Children series by Lawrence Anholt – Varies
Explore great artists through the eyes of children! Meet Degas and the Little Dancer, Van Gogh and the Sunflowers, Leonardo and the Flying Boy, and more!

If You series by Various Authors – Varies
If you lived in Colonial times, what kind of clothes would you wear? If you were there when they signed the Constitution you would see what was missing from the Constitution! If you lived during the Civil War, would you still go to school? If you grew up with George Washington, If you lived with the Cherokee, If you traveled west in a covered wagon, If your name was changed at Ellis Island. These are the questions the If You series provokes. Perfect for young kids!

Aimed at young boys interested in baseball, these Scholastic books are about the same level as the Magic Tree House series or the American Girl doll series. Each plot revolves around a kid who can travel back in time to meet famous baseball players through his baseball cards. Some of the baseball players featured are Babe Ruth and Jackie Robinson – making this series a perfect way to not only learn about your children’s sports heroes but to learn how their time period shaped their lives. 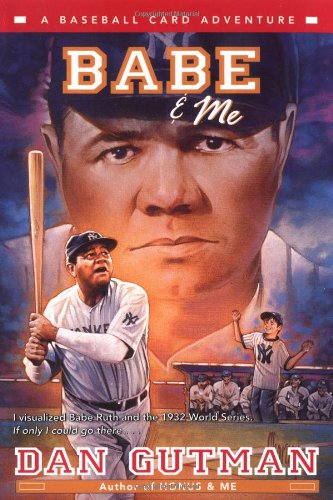 Rush Revere and the Brave Pilgrims by Rush Limbaugh – 1600s
I listened to this on audiobook, and I’ve heard others say the audiobook is better than the book. Anyways, I enjoyed this fun book about Rush Revere and his time-traveling horse. A great look into history!

The Scarlet Stockings Spy by Trinka Noble – 1777, American Revolutionary War
Maddy Rose is a plucky young daughter of a widow. Despite being young, she is somewhat of a spy – she uses her scarlet stockings as a way to communicate coded messages!

Ben And Me by Robert Lawson – 1700s
This is the story of Benjamin Franklin – as told by a mouse in a funny, witty and charming story. I haven’t read this one yet, but it seems great for teaching a bit about Ben Franklin for the kids that hate history!

Pink and Say by Patricia Polacco – American Civil War
In this true story, Pinkus Aylee, a black Union soldier, finds Sheldon Curtis left for dead and carries him home to be tended by his mother, but when the two boys attempt to rejoin the Union troops, they are captured and sent to Andersonville Prison.

A Place Called Freedom by Scott Sanders – American Civil War
This is the story of how a man and his family left Tennessee for Indiana and start a community of freed slaved in a placed called Freedom. You can get a free study guide at Adventures in Mommydom.

Hope’s Gift by Kelly Lyons – 1862, American Civil War
Hope’s father has decided to enlist in the war to fight for freedom. He slips away in the night, leaving Hope uncertain if she will ever see her father again. But, right around the corner is the Emancipation Proclamation, and a surprise for her as well!

Sarah, Plain and Tall by Patricia MacLachlan – late 1800s
These 3 books are a sweet story about a widowed midwestern farmer with two children–Anna and Caleb. The farmer advertises for a wife and Sarah from Maine answers the ad. This family goes on many adventures together and learn beautiful and sometimes difficult life lessons. The 3 books make wonderful read alouds.

Ruby’s Wish by Shirin Yim – late 1800s?
Unlike other little young girls in turn of the century China, Ruby’s wish is not to get married, but to go to university. It is a beautiful story of how persistence and hard work pays off. This charming picture book is also based on a true story, the author’s grandmother!

War Game by Michael Foreman – 1910s, WWI
This long picture book tells the incredible story of WWI, and how Christmas brought two opposing sides together peacefully during the war.

All of a Kind Family by Sydney Taylor – 1910s
I fell in love with this series (yes, it has sequels!) that make a superb read aloud. Told in short-stories about a Jewish family in New York, the “all of a kind family” is 5 sisters. Coming from a family of 5 girls, I loved this book so much because I could relate so much to the plot – someone always has some type of drama going on!

The Yellow Star by Carmen Deedy – Holocaust
This is a wonderful story based on a popular legend of King Christian X of Denmark courageously wearing the yellow Star of David in support of his Jewish people. Despite being completely fictional, it is a nice thought, and I do believe this is something Denmark’s beloved king would have done.

The Little Ships by Louise Borden – WWII
Told from the view of a fictional little girl, this picture book is about the little ships at Dunkirk, France during WWII and the massive rescue that occurred. 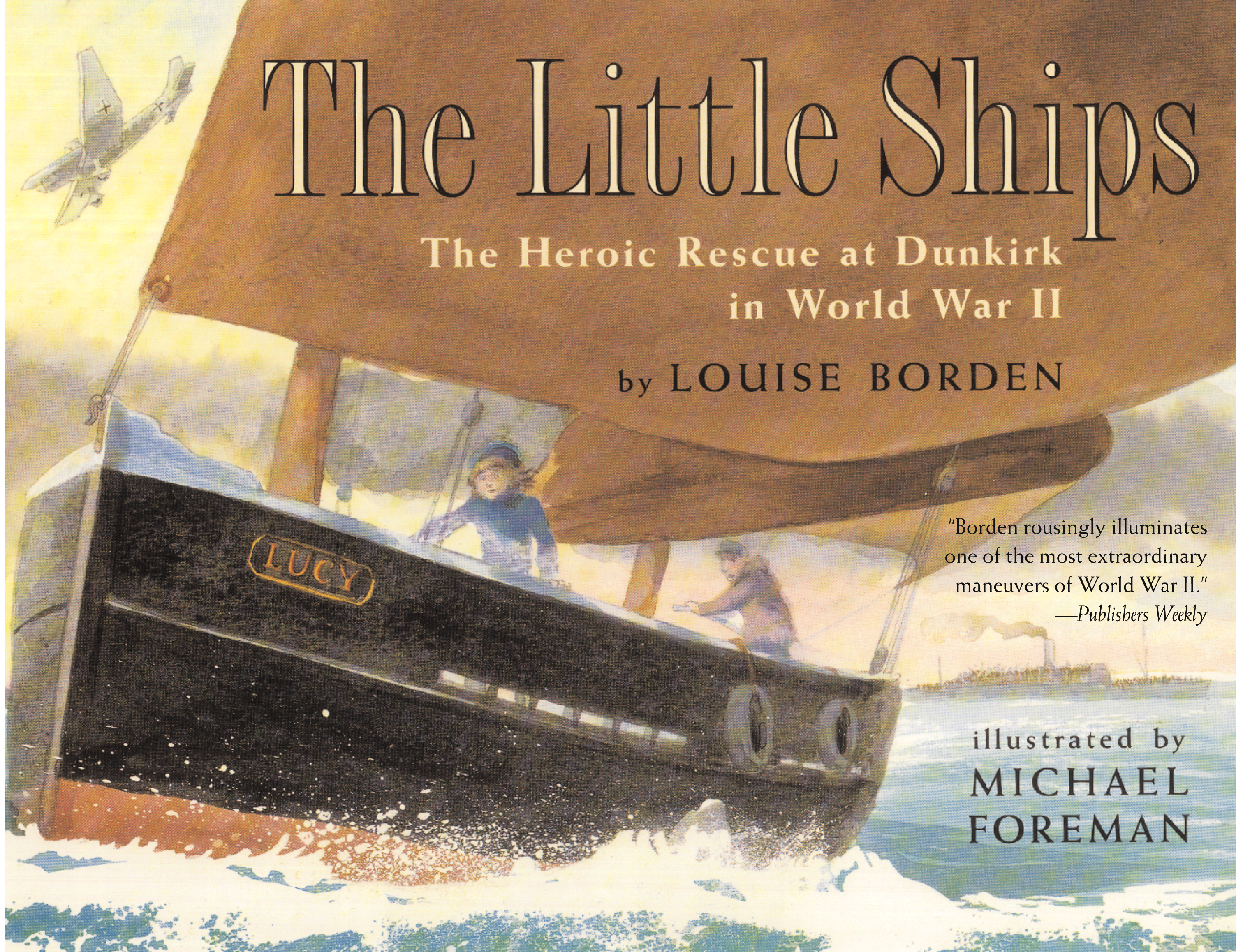 Twenty and Ten by Claire Bishop – WWII
This short chapter book is about twenty French children who rescue ten Jewish children during WWII. Everyone in the novel survives, it is non-graphic, and definitely a great children’s novel of bravery and doing the right thing.

So Far from the Sea by Eve Bunting – WWII
Laura Iwasaki and her family are paying what may be their last visit to Laura’s grandfather’s grave. The grave is at Manzanar, where thousands of Americans of Japanese heritage were interned during World War II. Among those rounded up and taken to the internment camp were Laura’s father, then a small boy, and his parents. Now Laura says goodbye to Grandfather in her own special way.

These Hands by Margaret Mason – 1950s/1960s
Joseph’s grandpa could do almost anything with his hands. He could play the piano, throw a curveball, and tie a triple bowline knot in three seconds flat. But in the 1950s and 60s, he could not bake bread at the Wonder Bread factory. Factory bosses said white people would not want to eat bread touched by the hands of the African Americans who worked there.

Who Was? series – All
Who was George Washington? Who was Albert Einstein? Who was Harriet Tubman? This series, about the same level as the Magic Tree House series, explores classic historical figures!

Along Came Galileo by Jeanne Bendick – 1500s
This is great book of Galileo’s life and discoveries with short, interesting chapters. After each chapter there are famous Galileo quotes given.

For the Love of Music by Elizabeth Rusch – mid 1700s
Most know about Wolfgang A. Mozart, the famous composer. Few know about his older sister, also a beautiful pianist. By the time she was 12, she was considered one of the greatest pianists in Europe, but few know her name. This true story, a picture book, is great for musical lovers! 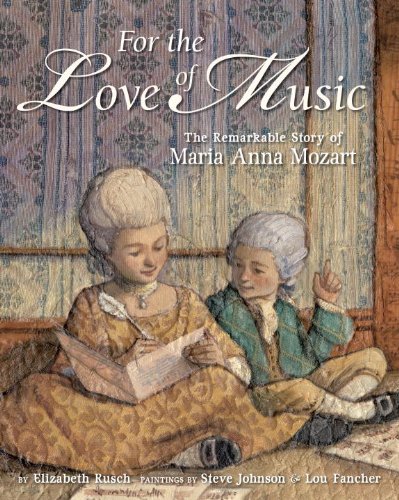 Henry’s Freedom Box by Ellen Levine – mid 1800s, American Civil War
This classic picture book is about a young slave named Henry, who has dreamed about freedom for as long as he could remember. The perfect solution? Mail himself to freedom.

Louis Pasteur, Founder of Modern Medicine by John Hudson Tiner – 1800s
Tells of the many events in the life of Louis Pasteur. There is fascinating detail about his experiments and struggles and triumphs from an unknown scientist to one of the world’s greatest heroes.

The Story of Thomas A. Edison by Frances M. Perry from A Book for Young Americans (Simply Charlotte Mason) – 1800s/1900s
Follow the life of Edison from “train boy” to newspaper publisher to telegraph operator to world-famous inventor.

Young Thomas Edison by Michael Dooling – 1800s/1900s
This is a fantastic children’s biography with rich, informative text and beautiful images. Edison wasn’t your average kid – so much that his mother pulled him out of school and homeschooled him. I loved this wonderful book and it’s definitely for any “not normal” kid. Edison was far from normal but achieved many incredible things in his lifetime.

The Great Horseless Carriage by Michael Dooling – late 1800s
The first cars were known as “horseless carriages.” This great picture book is how it all began.

Winnie: The True Story of the Bear That Inspired Winnie the Pooh by Sally M. Walker –  1910s
When Harry Colebourn saw a baby bear for sale at the train station, he knew he could care for it. Harry was a veterinarian. But he was also a soldier in training for World War I. This picture book on the story of Winnie-the-Pooh is one of the sweetest picture books I have ever read. It also has fantastic pictures. 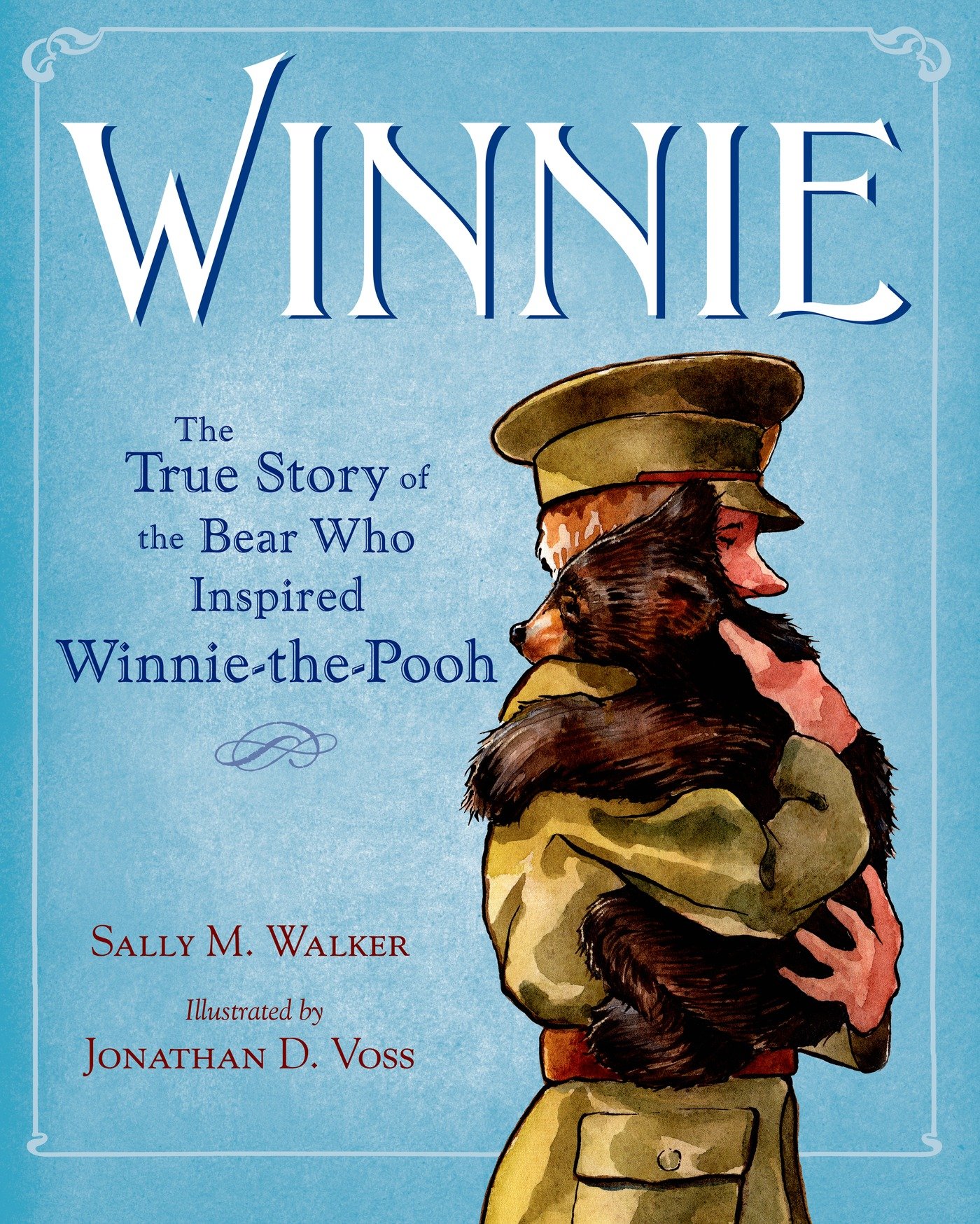 Anna and Solomon by Elaine Snyder – 1920s, Immigration
Young Jewish couple Solomon and Anna are madly in love. However, with Jewish persecution growing in Russia, he knows he must move to a better life in America. So he goes alone, works very hard, and pays for his beloved bride to come. As he waits for her to get off the boat, he is greeted by a surprise! I loved this beautiful picture book and I would definitely recommend it for all ages.

Passage to Freedom by Ken Mochizuki –  early 1940s, WWII
Chiune Sugihara was a Japanese diplomat who is known for saving 6,000 Luithanian Jews by illegally writing out visas for them. This non-graphic picture book is perfect for kids. I would highly recommend it.

Irena Sendler and the Children of the Warsaw Ghetto by Susan Goldman Rubin – 1940s, Holocaust
Irena Sendler was a petite young Polish woman who smuggled 2,500 Jewish children out of the Warsaw Ghetto during WWII. The children she rescued were hidden in convents, boarding schools, and with kind Polish families. She, and every single child she rescued, survived the war. This is her incredible story. (There’s another picture book about Irena called Irena’s Jars of Secrets but I liked this one better.) Find the book study here. 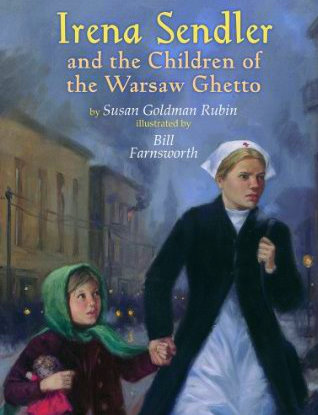 Always Remember Me: How One Family Survived WWII by Marisabina Russo – 1940s, Holocaust
This book is based on the author’s own family history through picture albums from the author’s grandmother. It’s a heartbreaking, yet inspiring story.

Also check out Historical Movies For Kids, and 30+ Ways to teach History Without a Textbook!