“Since it is so likely that (children) will meet cruel enemies, let them at least have heard of brave knights  and heroic courage. Otherwise, you are making their destiny not brighter, but darker.” -C.S. Lewis 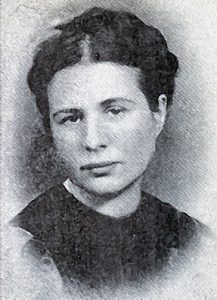 The Warsaw Ghetto, opened in 1940, was the largest ghetto during Nazi Germany, holding over 500,000 Polish Jews. During that time, Germans were allowed 2,613 calories, gentile Poles were allowed 700 calories, and Jews were allowed only 184 calories. (Three slices of white bread is approximately 184 calories.) Along with starvation and malnutrition, another issue in the ghetto was lice.

In conditions as horrific as the Warsaw Ghetto, typhus, among other diseases, was common. Typhus, spread from lice feces, is one of the worst diseases because it spreads like wildfire. These were the conditions Jews were forced to live in, and many gentiles simply chose to avoid this part of town. But not Irena.

Tall Nazi guards loomed over the heavy-guarded entrance of the Warsaw Ghetto. But a young Catholic social worker, who was not even five feet tall, was not daunted. She was on a mission. Many lives depended on the success of this mission, and she knew she risked execution and torture.

She would quickly stroll into the Warsaw ghetto, take a Jewish baby out, hide her in a tool box, face the Nazi guards and pretend nothing was wrong, and give the baby to a loving Polish-Catholic family. She would do this, and similar actions, 2,500 times within eighteen months. (yes, two thousand five hundred times)

Her name was Irena Sendler. Her inspiration came from her father. Irena’s father devoted his post-WWI life to help impecunious Jews suffering from typhus. He died of typhus when Irena was seven, but she remembered he strongly believed in always helping others, regardless of religion and nationality.

As soon as the Nazis began persecuting Jews, Irena began forging documents and offering food and shelter to Jews. But for Irena, this wasn’t good enough. In fact, this was nothing. When the Warsaw Ghetto opened, Irena had had enough. She had to do more.

With help from 25 other social workers, Irena did her official job in the Warsaw Ghetto, looking for sick and contagious Jews, as well as look for Jewish children to get out. What first began with rescuing orphans living on the ghetto streets turned into asking random Jewish parents to give up their children.

Imagine having to give up your children to a stranger of another religion – not knowing if you would ever see them again. Imagine the thought of your child being converted, of getting caught without you being there to comfort them. There was no guarantee these Jewish children would make it out of the ghetto, never mind survive the war.

There were two main ways out of the ghetto and into Warsaw that Irena smuggled out the children – an old courthouse and a church. Older children, who could memorize Catholic prayers, were smuggled through the church. Younger children and babies were hidden in sacks, tool boxes, or under a potato cart and smuggled through the old courthouse. Sometimes she was able to legally get a severely ill child out with an ambulance. Other times she used the ambulance to get healthy children out.

If a hidden baby cried near the Ghetto wall, Irena trained her dog to bark and drown out the baby’s cries. The dog’s barking would hit a chain reaction and the Nazis would let Irena pass due to the chaos. Because many of the children were under false names, Irena wrote each child’s identity and other information on slips of paper and kept them in a jar, which she buried under an apple tree.

After the war, she planned on retrieving the slips and reuniting the children with their parents. Sadly, nearly all of the children’s parents had died in the concentration camp Treblinka. Nearly 800,000 Jews lost their lives at Treblinka. 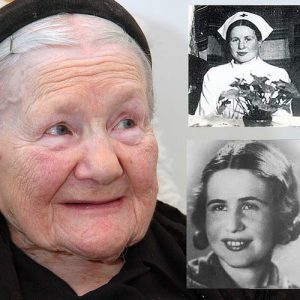 On October 20, 1943; Irena was arrested at her home. For several days, she was tortured mercilessly before being sentenced to death. Members of the resistance who she worked with bribed guards to let her go. Irena Sendler and the 2,500 children she rescued survived the war.

She was nominated for the Noble Peace Prize in 2007, but lost to Al Gore. Although not many people are happy about this, Irena Sendler would have insisted she had better things to worry about. Irena claims to have done nothing doing the war.

Sadly, Irena Sendler died May 12, 2008, at the age of 98. May the memory of Irena and the children she saved always be a reminder of what one person can do.

In 2009, her story was told in the amazing Hallmark Hall of Fame film The Courageous Heart of Irena Sendler. This would make a great film for middle schoolers and up. There is violence, but it’s not graphic and mostly offscreen.

There are three great picture books about Irena.

Each are appropriate for kindergarten and up, and the Holocaust is dealt with appropriately in both. My personal favorite is the first one, although it’s the longest of the three.

GRAB THE MOVIE STUDY AT MY STORE OR ON TEACHERS PAY TEACHERS. 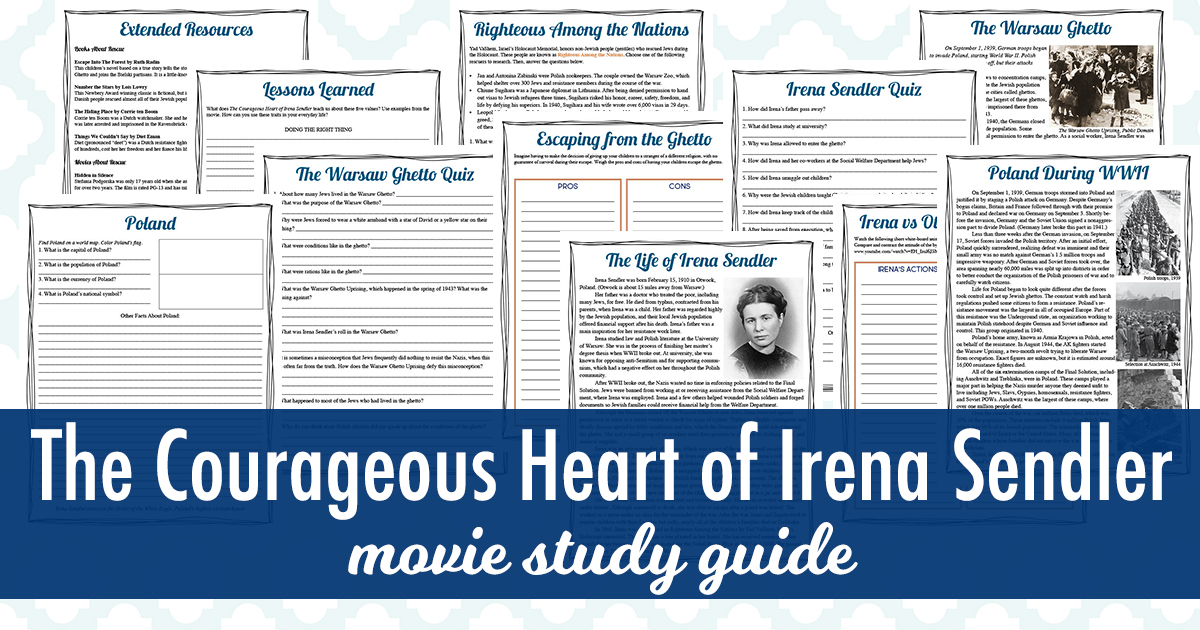